In Algae We Trust. That might just as well have been the subtitle of this book. In Slime (published in the UK as Bloom, but I read the US version), author Ruth Kassinger writes of the many fundamental, often eye-opening roles that algae play in our ecosystems. But she also travels around the world to talk to farmers, scientists, and inventors. From food to plastics to fuel, entrepreneurs are discovering that these little green powerhouses hold immense biotechnological potential. 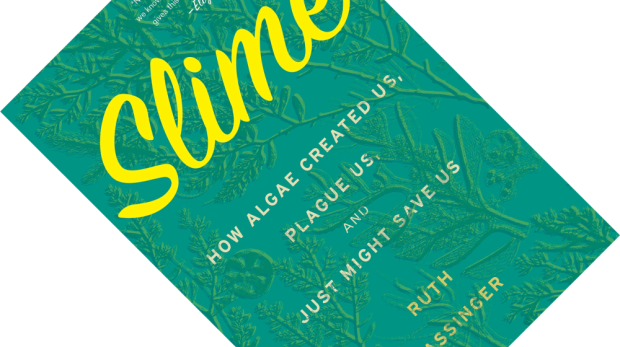 Slime: How Algae Created Us, Plague Us, and Just Might Save Us, written by Ruth Kassinger, published in the USA by Houghton Mifflin Harcourt in June 2019 (hardback, 320 pages)

From the above, you will have already gathered that this book covers a myriad of topics. Kassinger has helpfully grouped her 27 short and very readable chapters into four sections. These deal with evolution and early life, algae as food, algae as fuel and feedstock, and the role of algae in a changing climate. Kassinger writes in a casual style without dumbing things down, and when she cracks a joke, they are actually clever. The truth is, she does not have to work hard to sell the book to her reader – it contains so many eye-opening facts and inspiring stories of biotech initiatives that it sells itself. That, and there are a handful of lovely illustrations by Shanthi Chandrasekar.

I took great interest in the first section on early life, even though, as an evolutionary biologist, I am familiar with many details. For example, the first fossils (stromatolites) left by cyanobacteria (blue-green algae); the Great Oxygenation Event and the rusting of Earth’s iron reserves; or the first instance of endosymbiosis that turned a strain of cyanobacteria into chloroplasts, the photosynthesising powerhouses found in plant cells. All of these amazing events have been covered extensively elsewhere, though Kassinger relays them with great ease. Amazingly, cyanobacteria have also been implicated in causing the Huronian Glaciation that saw the planet frozen solid between approximately 2.4 to 2.1 billion years ago. (Actually, I did know this from reviewing The Oceans, but I had forgotten about it.)

“Amazingly, cyanobacteria have also been implicated in causing the Huronian Glaciation that saw the planet frozen solid between approximately 2.4 to 2.1 billion years ago.” 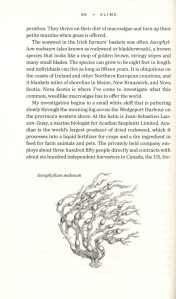 The other three sections of the book contained much that was new to me. Archaeologists argue that humans, in pursuit of seafood, stuck to coastlines as they migrated around the planet, and Kassinger highlights that it might very well have been the nutrition found in algae that stimulated brain expansion during our evolution. She explores the importance of algae in Japanese cuisine and visits a South-Korean algae farm, as this country has become the world’s leading exporter. Interestingly, there is also a strong tradition in Wales to collect algae as a cooking ingredient.

What I really appreciated here was Kassinger’s even-handedness. So, while she visits a wild-seaweed harvester who tries to run a business in harmony with nature, she also takes a look at a commercial aquaculture operation. And while she highlights the fantastical nutritional value of algae, she is sceptical of overblown claims by producers and cautious of supposed health benefits of, for example, omega-3 oils. And she is outright scathing – deservedly so – of wellness gurus who ignore scientific evidence to the contrary by claiming that carrageenan, a polysaccharide compound in algae, is unsafe for consumption.

“What I really appreciated here was Kassinger’s even-handedness […] while she highlights the fantastical nutritional value of algae, she is sceptical of overblown claims by producers […]” 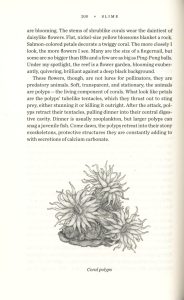 Beyond food, algae can reduce the need for antibiotics in animal husbandry, be used as agricultural fertilizer, or – excitingly – be turned into oil to make plastics or fuel. It was a chance visit to a startup biofuel company that got Kassinger started on this book in the first place, so she spends quite a bit of time going into the particulars of oil. Although biofuel has gotten a bad reputation for the land and water requirements of crops such as corn, algae culture does not need premium agricultural land or freshwater. As with all these novel applications, a lot of research and development is still needed to optimise production processes, though recent gene-editing tools such as CRISPR could greatly help.

It is hard not to get starry-eyed about the possibilities, but I think that Kassinger gives a balanced account. For instance, her explanation of why electric cars are not necessarily better for the environment shows an author who acknowledges subtleties and avoids hype. (After all, it depends on where the energy came from that you charge their batteries with.) But even taking a cautious stance, algae do seem to hold great potential for producing the different kinds of fuel needed by cars, aeroplanes, and ships. As she highlights, it is unfortunate that the fracking boom has knocked the bottom out of oil prices, bankrupting some promising startup ventures working on algae fuel. Others have shifted their business to making oils used in the foods and cosmetics industry, including alternatives to the dreaded palm oil.

“It is hard not to get starry-eyed about the possibilities, but […] algae do seem to hold great potential for producing the different kinds of fuel needed by cars, aeroplanes, and ships”

In the book’s final section Kassinger considers algae in coral reefs and the threat of climate change, algae naturally mopping up excess nitrogen and phosphorus, the problem of harmful algal blooms, and the possible role of algae in geoengineering to draw down atmospheric carbon dioxide.

Kassinger is an enthusiastic yet even-handed cheerleader for algae. Despite the huge range of topics covered her book is well organised. What really makes it a joy to read are her deft explanations – whether it is the difference between pro- and prebiotics, or the finer details of oil production. Even when she writes on a topic I am more familiar with, such as the atmospheric chemistry behind the Great Oxygenation Event, she shows an enviable knack for writing plainly. An ode to pond scum, this book is an eye-opener that ensures you will never look at algae the same way again.

Archibald’s One Plus One Equals One paperback