The legendary British broadcaster and natural historian Sir David Attenborough needs almost no introduction. From his first appearance on our television screens in 1954, he has gone on to a long and distinguished career presenting and narrating groundbreaking nature documentaries. And he shows no sign of slowing down. His voice and style have become so iconic that he has been dubbed the voice of nature. Over the years, he has increasingly expressed concern over the state of the natural world, and in A Life on Our Planet Attenborough fully engages with this topic. However, when you turn to the title page you will notice the name of a co-author, Jonnie Hughes, who directed the Netflix documentary tying in with this book. As Attenborough explains in his acknowledgements, Hughes has been particularly instrumental in the writing of the third part of the book, together with substantial assistance of the Science Team at WWF. This is Attenborough’s witness statement, yes, but whose vision of the future is it?

A Life on Our Planet: My Witness Statement and a Vision for the Future, written by Sir David Attenborough with Jonnie Hughes, published by Witness Books (an imprint of Ebury Press) in October 2020 (hardback, 282 pages)

A Life on Our Planet is divided into three parts, the first of which features highlights from Attenborough’s filmmaking career. Interwoven with vignettes that you might recognize from his autobiography are short episodes in the history of life on our planet and the rise of human civilization – this is Attenborough writing at his finest. Overlaid is his increasing concern for the changes he has witnessed. Each chapter heading ominously lists the human world population, the atmospheric carbon level, and the estimated percentage of wilderness remaining in a certain year.

The brief second part, “What Lies Ahead”, serves as a bridge to the third part and introduces several important concepts. One is the Great Acceleration, the period following the 1950s in which our activity and impact on the environment ramped up tremendously. The other is the Planetary Boundaries model drawn up by Johan Rockström and colleagues, which I brought up in my previous review of Planetary Accounting. This Earth systems science framework demarcates a “safe operating space for humanity” by identifying nine planetary processes and systems with their boundary values, several of which we have exceeded with our actions. In just ten pages, the book then looks ahead to some likely environmental tipping points in our near future, such as forest dieback and permafrost melting. I was expecting a longer section along the lines of Lynas’s Our Final Warning and Wallace-Well’s The Uninhabitable Earth, but clearly, this book has no interest in dwelling on the catastrophes ahead.

“Interwoven with autobiographical vignettes are short episodes in the history of life on our planet and the rise of human civilization – this is Attenborough writing at his finest.”

This brings us to the vision for the future, which is where the question of authorship becomes increasingly blurred. At times I was not sure whether I was reading Attenborough’s voice or a WWF policy brief. The book takes the planetary boundaries model with its ecological ceiling and Kate Raworth’s modification known as the Doughnut model, which adds a social foundation to it, i.e. the minimum requirements for human well-being. It then outlines some of the changes required to significantly reduce our impact on the planet, leaning towards “green” and nature-based solutions aimed primarily at restoring biodiversity. The overall tone here is hopeful and the book hits many relevant points, though I have some criticism. 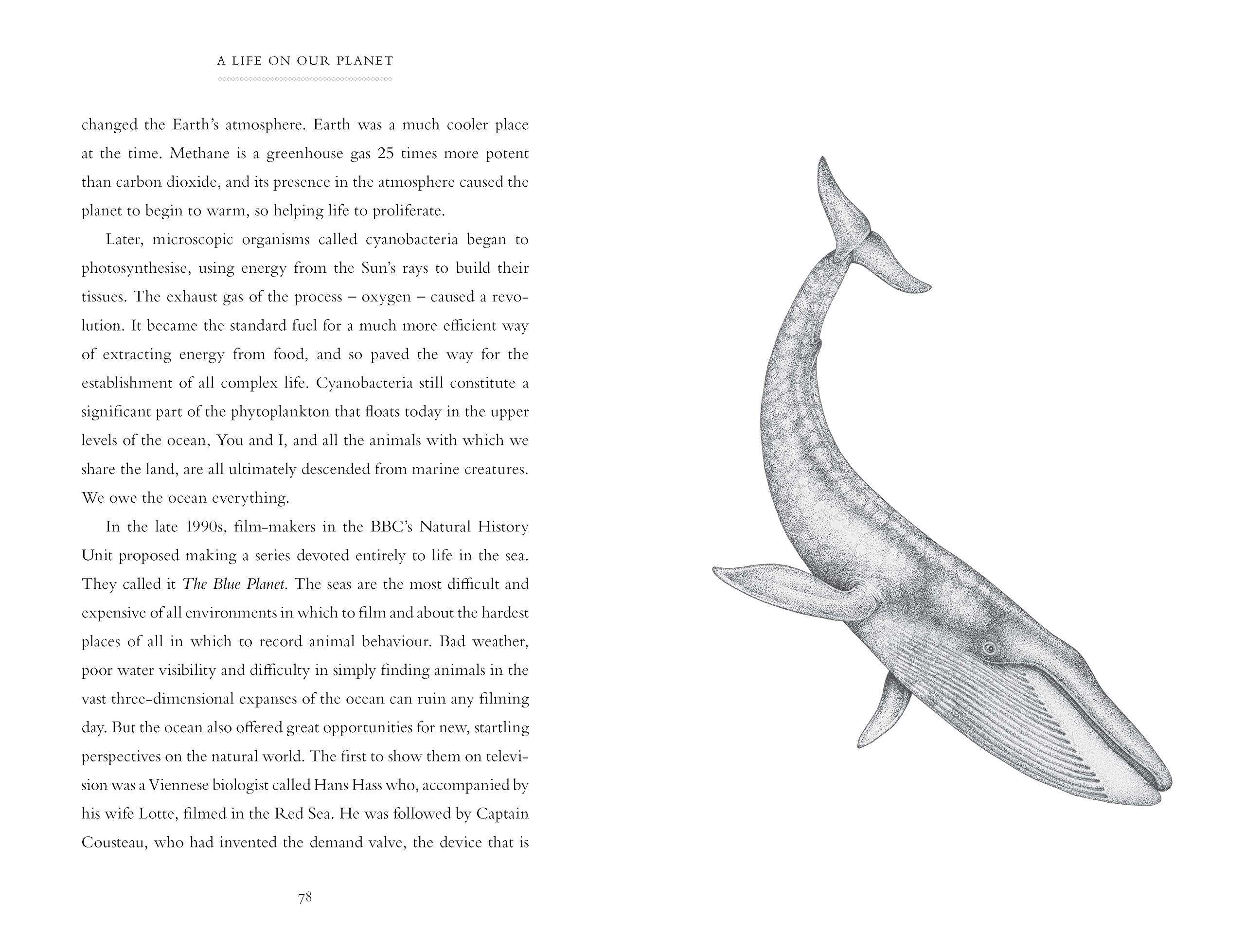 Let’s start with what I appreciated. First, and this feels like Attenborough speaking, it gets its philosophy right, tackling anthropocentrism: “We moved from being a part of nature to being apart from nature […] we need to reverse that transition” (p. 125). It also acknowledges the shifting baseline syndrome in the context of fisheries and beyond: how each generation takes an increasingly impoverished environment as the new normal. Right out of the gate it tackles the need to move beyond the paradigm of perpetual growth and abandon Gross Domestic Product as our prime measure of welfare. Agriculture will have to rely on far less land through solutions that are high-tech (e.g. hydroponic greenhouses run on renewable energy), or low-tech (e.g. a shift away from monocultures to something more approaching functional ecosystems via regenerative farming and the growing of mixed crops). Most important would be a change from a meat- to a plant-based diet. Attenborough again: “When I was young […] meat was a rare treat” (p. 169). We should want less stuff and require our things to be repairable and recyclable, moving ultimately towards a circular economy. This all ties in nicely, although it is not spelt out here, with an ethos of self-limitation that we need to reclaim.

“This brings us to the vision for the future, which is where the question of authorship becomes increasingly blurred. At times I was not sure whether I was reading Attenborough’s voice or a WWF policy brief.”

Carbon capture will have to be achieved not by high-tech solutions, but by both reforestation on land and the farming of kelp forests in the sea (Ruth Kassinger already made the point in Slime that algae might just save the world). Both these solutions will help the massive rewilding efforts this book envisions: Marine Protected Areas will help fish populations to recover, resulting in sustainable fisheries, while on land more habitat will become available for wild animals. And, finally and importantly, the book tackles human population numbers, aiming for the humane solution of stabilising the world population as quickly as possible at 9-11 billion people by lifting people out of poverty and empowering women.

The holistic package proposed here, underpinned with examples of success stories from around the globe, almost makes it sound like we can have it all. Can we? The authors acknowledge that many of these transitions will not come easily and will require everyone to come together and cooperate (in itself a tall order). Where achievability is concerned, the devil is in the details, and I do feel that these are sometimes glossed over and that taboo subjects are avoided.

Take agriculture – there is no mention of the tremendous potential of genetically modified organisms. Similarly unmentioned regarding renewable energy is the concept of energy density and our reliance on increasingly energy-dense fuels as civilization progressed. There is no consideration of the tremendous amount of resources needed to build and maintain the necessary infrastructure. A combined solution of renewable and nuclear energy (admittedly a non-renewable) is considered a no-no . And though a circular economy is a step up from our linear system of produce-use-discard, you cannot endlessly recycle: a constant influx of virgin material is required. Not all metals can be economically recovered, nor all the compound materials we make unmade. Ever tried unfrying an egg? Entropy does not run that way.

“The holistic package proposed here […] almost makes it sound like we can have it all. Can we? […] these transitions will not come easily and […] the devil is in the details.”

The word “overpopulation” is studiously avoided, which is remarkable as Attenborough has been outspoken on the subject elsewhere (see this short explainer or the 2011 RSA President’s Lecture). The closest he gets to it here is when he writes that “we have overrun the Earth” (p. 100). Later, the possibility of a demographic transition to a declining world population is mentioned, but not the suggestion put forward by some that a lower world population of, say, 2-3 billion might be more sustainable. And though Attenborough points out increased longevity as a contributing factor, there is no examination of our relationship with death. Should we really direct all our efforts to maximising life span? At what cost, both environmental and quality-of-life-wise? And, lastly, the now-dominant narrative of female empowerment is only half the story and puts the onus squarely on their shoulders. Making contraception and abortion available to women is needed, but better still would be to prevent pregnancies by starting with male education. Condom, gentlemen?

Admittedly, I am arguing details here. Though they need serious consideration in my opinion, much of what is proposed here is sensible. A Life on Our Planet is very accessible and admirably concise. Its central message, that things cannot continue as they are, stands. If there is anyone who can communicate this to a wide audience, it is Sir David Attenborough. Some of the writing here will stick with you long after you have closed the book: “We often talk of saving the planet, but the truth is that we must do these things to save ourselves.” (p. 218). Here speaks a wise elder who, even at 94, indefatigably defends our environment.

A Life on Our Planet hardback

Dasgupta’s Time and the Generations hardback

Tucker’s A Planet of 3 Billion paperback