What I am about to write is probably going to upset many people, but… I am growing frustrated with the narrative of much of the environmental movement. Taking to the streets to protest and demand change, to “do something!”, is all fine and dandy, but it is also a bit hypocritical. It fosters a narrative in which the onus is always on others and it begs the counter-question: “what are you willing to give up?”. That is the hard question.

There, I said it. You have the option to stop reading now.

In all seriousness, if we want to avert dangerous climate change or allow forests to recover from deforestation, how much change is enough? How much are we allowed to consume? Planetary Accounting will not offer you final prescriptive answers, but it is an important first step in quantifying per capita quota for what each of us can consume and pollute without it costing the planet. 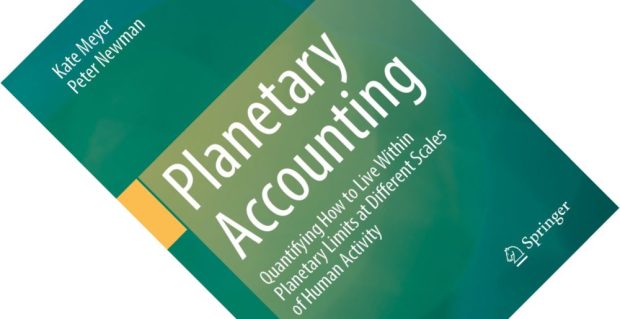 Planetary Accounting: Quantifying How to Live Within Planetary Limits at Different Scales of Human Activity, written by Kate Meyer and Peter Newman, published by Springer in March 2020 (hardback, 290 pages)

This book follows on perfectly from Kallis’s Limits that I just reviewed, which urged for a culture of self-limitation. The immediate follow-up question then is: how much? In Planetary Accounting, sustainability scientists Kate Meyer and Peter Newman take the planetary boundaries framework as their starting point and translate it into planetary quotas. If the former can be likened to a patient’s diagnosis, the latter can be interpreted as the doctor’s prescriptions: here is the amount and direction of change needed.

In case you are not yet familiar with it, the planetary boundaries framework was developed by Johan Rockström and colleagues and presented in a 2009 Nature paper, followed by a book for a general audience in 2014, and further refinements proposed in a 2015 Science paper. It is an Earth systems science framework that demarcates a “safe operating space for humanity” by identifying nine planetary processes and systems with their boundary values. Think climate change, biodiversity loss, or ozone depletion. For several of these, we have crossed the limit and are collectively pushing our environment towards a new state that is likely to be a lot less friendly to human life. A case is even being made that we have entered a new geological epoch, the Anthropocene.

You might ask why it matters that we emit more nitrogen and phosphorus into our environment than we should, or are seeing species extinction rates far above background values. Surely, our world always changes and is not a museum piece. Consider the following, I think very interesting, argument. Some authors propose that it took the stable climatic conditions of the Holocene for civilization to take off. Not because climate drove civilization – humanity was rearing to go – but because we needed a stable window of opportunity. Meyer & Newman mention Cook’s A Brief History of the Human Race, but I came across this same argument in Dartnell’s Origins where he suggested that there may have been earlier attempts at migrating out of Africa or developing agricultural civilizations, that simply fizzled out before taking off because environmental conditions were unfavourable. Rockström and colleagues argue that the state of the planet during the Holocene is the only one we know of in which settled societies can thrive. Whether we can in other environmental states is unknown, nor do we know what new balance the Anthropocene will reach. So, how lucky, really, are we feeling?

“it took the stable climatic conditions of the Holocene for civilization to take off. […] Whether we can [thrive] in other environmental states is unknown […] So, how lucky, really, are we feeling?”

This introduction is accompanied by a very capable routing of the arguments of climate change denialists and a brief exploration of other environmental impact assessment frameworks before Meyer & Newman turn to the limits of the planetary boundaries framework. One issue is that it describes the problem, but does not prescribe solutions. Some translation is needed and to that end, Meyer & Newman here propose the planetary accounting framework.

The bulk of the book describes this framework and develops quotas for each of the nine planetary boundaries, though it should be noted that readers might have to turn to supporting publications, including Meyer’s PhD thesis, for more details. What this exercise reveals is interesting. Four planetary boundaries have been exceeded, three not yet, and for two we lack information. The planetary quotas calculated here show we exceed seven, are at the limit of one and lack information for the last. If that seems confusing, remember that boundaries describe the state of the planet and quotas our annual impact. Some boundaries will be breached soon if we maintain current rates.

To illustrate this with an example. For climate change, one planetary boundary is an atmospheric carbon dioxide concentration of 350 ppm (parts per million), which has been exceeded. The corresponding quota is based on CO2 emissions, expressed in gigatonnes. To meet the target of the IPCC climate change scenario that the authors have selected (limit global warming to +1.5 °C by 2100) we should change our emissions from the current +36 to -12 GtCO2/year. This is an example where we should not just reverse direction (i.e. emit less), we should be actively removing atmospheric CO2. Deriving quotas for all boundaries is not necessarily straightforward and Meyer & Newman have drawn on the knowledge of a large body of specialists when developing the planetary accounting framework, with caveats, justifications, and assumptions described here.

“[The planetary boundaries framework] describes the problem, but does not prescribe solutions. Some translation is needed and to that end, Meyer & Newman here propose the planetary accounting framework.”

Each chapter also gives suggestions on how these quotas can be achieved at different levels (from individuals to nations) and in different sectors (communities, governments, and businesses). They call their approach poly-scalar. Although this is a first step in translating planetary boundaries to something more actionable, you will notice that this is still several steps away from usable advice. The authors acknowledge that more work is needed, that there are different ways to achieve these quotas, that the quotas are moving targets subject to revision, and that there will be a lot of political and ethical horse-trading when it comes to deciding who has to sacrifice what (especially in the developed vs. developing world). In short, they have laid out the total amount of change needed but how we are going to achieve this is yet to be decided.

I have two points of criticism. First, with the book itself. Though accessibly written, it suffers noticeably from typos and spelling errors that should have been picked out in the editorial stage. Furthermore, seeing the importance of the subject matter, the book is exorbitantly priced, probably putting it out of reach for many readers. I recommend you also have a good look at the website of The Planetary Accounting Network, the non-profit that Kate Meyer founded after completing her PhD.

My second point of criticism is with the planetary accounting framework, which has its limitations. There is no mention here of non-renewable resources: all the ores and other minerals we extract from the planet’s crust, many of which, such as rare metals, are vital to the technological solutions we envision will help us address environmental problems. Whether their framework can be expanded and adjusted to account for these is questionable, seeing such resources are finite. Furthermore, Meyer & Newman are conspicuously silent about overpopulation, although occasionally mentioning that quota sizes will depend on future population growth. I know that I am starting to sound like a stuck record, but should there be a population quota? Depending on living standards plugged into your equations, some authors have tentatively concluded that 3 billion is a more sustainable limit and that we cannot justify having more than one child.

Of course, it would be unreasonable of me to expect their framework to be a cure-all – they acknowledge it is not “one supersystem to solve everything”. Keeping that in mind, Planetary Accounting is a first step in translating the planetary boundaries to something more actionable, and Meyer & Newman provide a valuable roadmap that I expect will be widely welcomed.

Zalasiewicz et al.‘s The Anthropocene as a Geological Time Unit

Cook’s A Brief History of the Human Race

Coole’s Should We Control World Population?

Dasgupta’s Time and the Generations

Tucker’s A Planet of 3 Billion