If ants give you the heebie-jeebies, you will want to turn away now, for this book review will deal with the ultimate arthropod nightmare: army ants. If, however, insects are your shtick, stick around, because German entomologist Daniel Kronauer has written a phenomenal book on army ant biology that is chock-a-block with jaw-dropping, award-winning photography.

Ants have been getting under my skin lately. The more I read about ants, the more I want to read about ants. This year, fortunately, Harvard University Press has spoiled myrmecophiles – of the human kind, that is. After Desert Navigator in February, Army Ants is the second big book on ants for 2020. These social insects, cooperatively hunting in swarms of up to millions of individuals strong, epitomise the unstoppable force of nature. But this fearsome reputation hides a truly fascinating story of evolution, collective behaviours, and unlikely insect alliances. 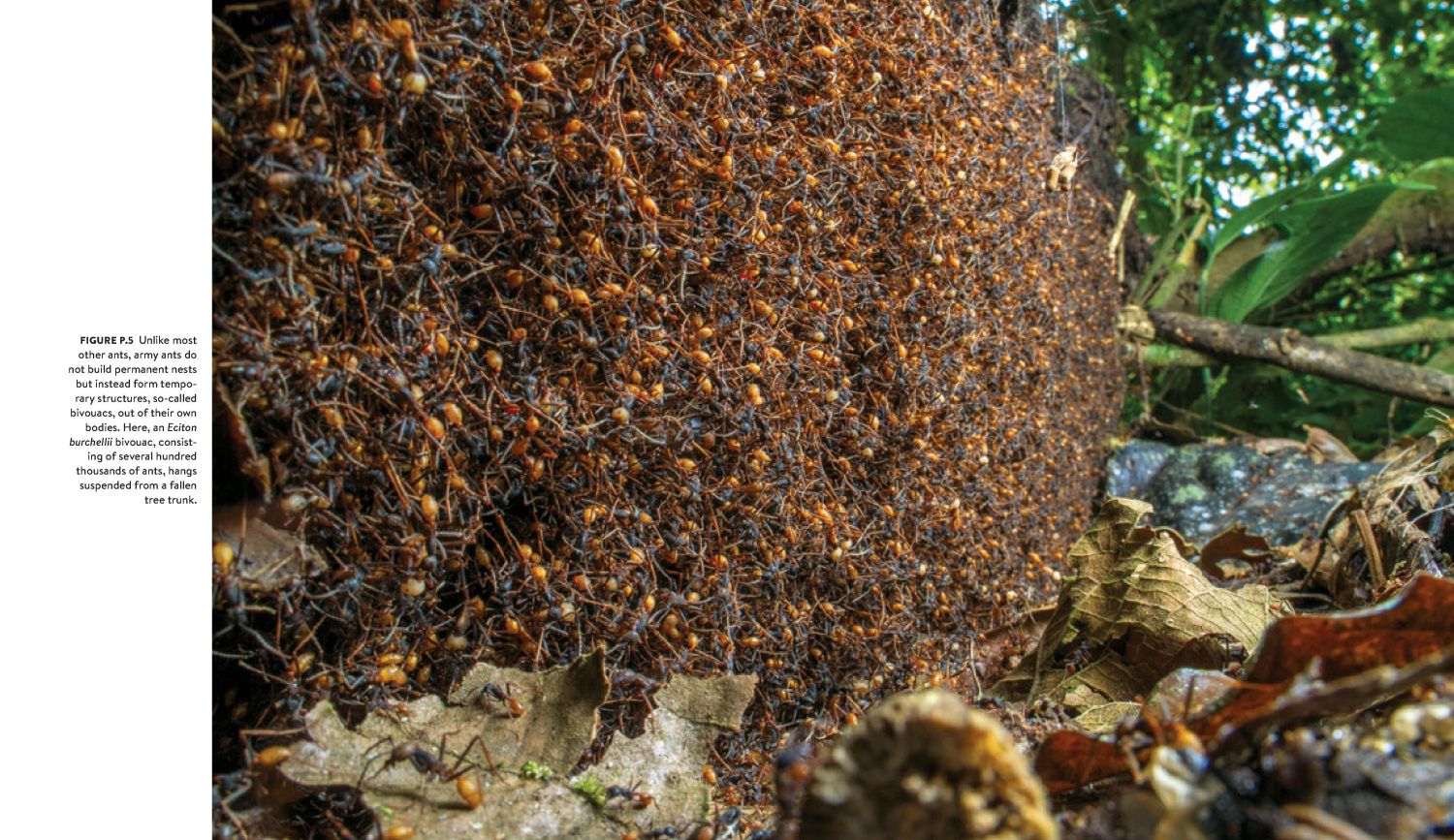 Kronauer has set himself a challenging task with Army Ants. On the one hand, he aims to provide a successor to the books by Theodore Schneirla (1971) and William Gotwald (1995), incidentally both also called Army Ants. There are many new findings from fieldwork and the application of molecular genetic tools that should interest professional entomologists. On the other hand, he wanted a book geared towards a more general audience. And he has certainly struck the right balance. Rather than an exhaustive army ant encyclopaedia, Kronauer focuses on two closely-related species, Eciton burchellii and Eciton hamatus, that he has extensively studied at La Selva Biological Station in Costa Rica. Still, plenty of other army ant species feature here in detail.

The book starts with a history of both the discipline and the species. The discovery of army ants takes the reader back to the 1700s, to the first depictions by famous naturalist and artist Maria Sibylla Merian and subsequent studies by e.g. Mutis, Fabricius, Latreille, Darwin, Wallace, Bates, and William John Burchell after whom E. burchellii is named. The story of their evolution is the story of eusociality: the extreme form of social living where the many forego reproduction so that the few become specialised egg-laying machines, and the whole functions as a superorganism. In particular, it is the story of the ant subfamily Dorylinae, which contains most army ant species. 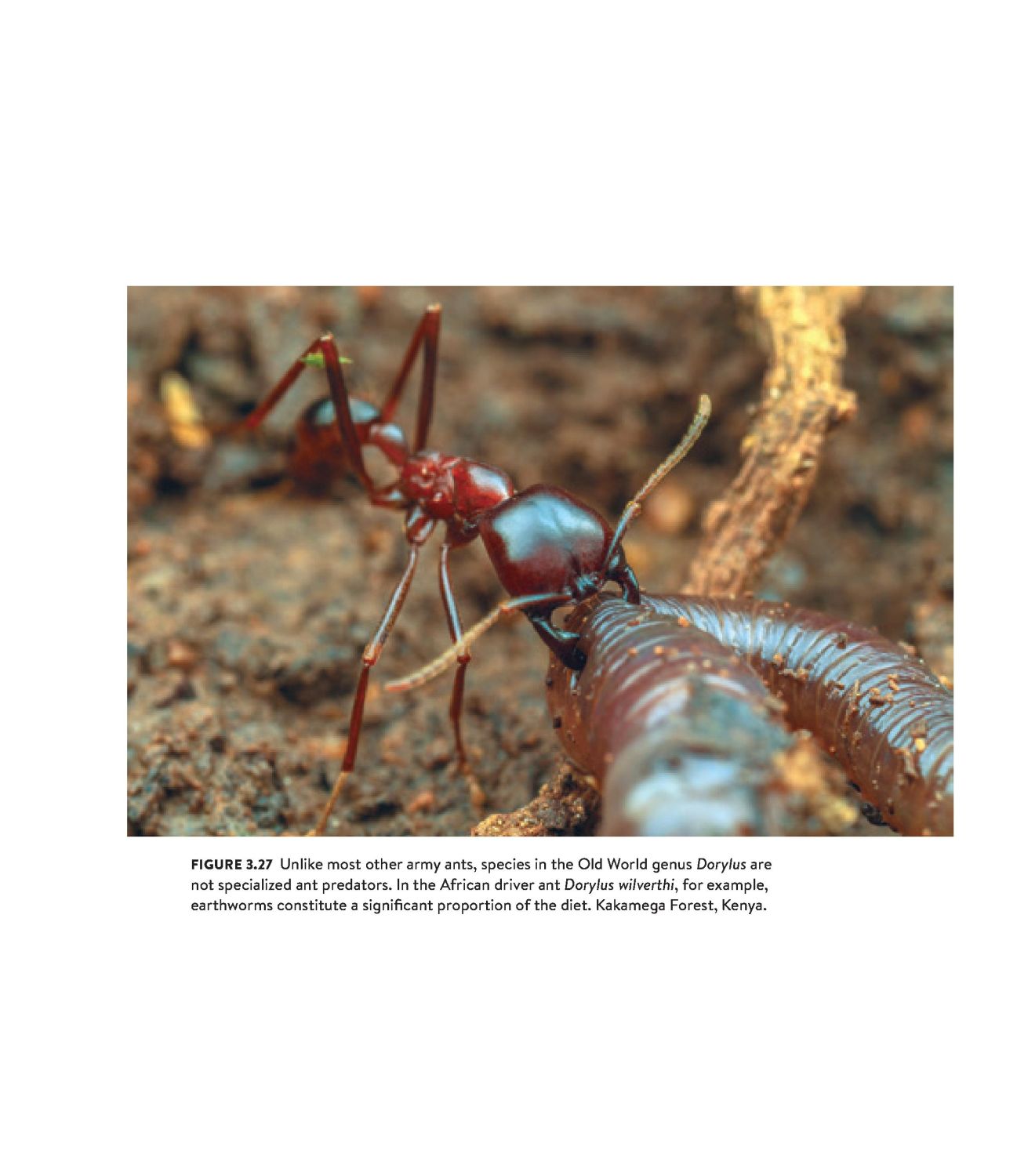 At the core of Army Ants lies the question of what, amidst all the social insects, makes them special? This is where the book gets really interesting and details the three closely connected traits that make army ants unique: mass raiding, nomadism, and colony fission. Or, as Kronauer puts it plainly: “hunting in massive groups, frequent relocation of the nest, and multiplying by splitting large colonies”.

I will be honest with you, I was spellbound by these three chapters and can only give you a taster here of why army ants are so fantastically fascinating. But consider the anatomy and dynamics of swarm and column raids, the emergence of living architecture when workers link their bodies together to provide bridges and bivouacs for their nestmates, or the many animals that systematically follow army ants to prey on the creatures flushed out into the open when a swarm approaches. Think of the nomadic lifestyle that means regular and complete relocation of nests – eggs, larvae, and everything else included. 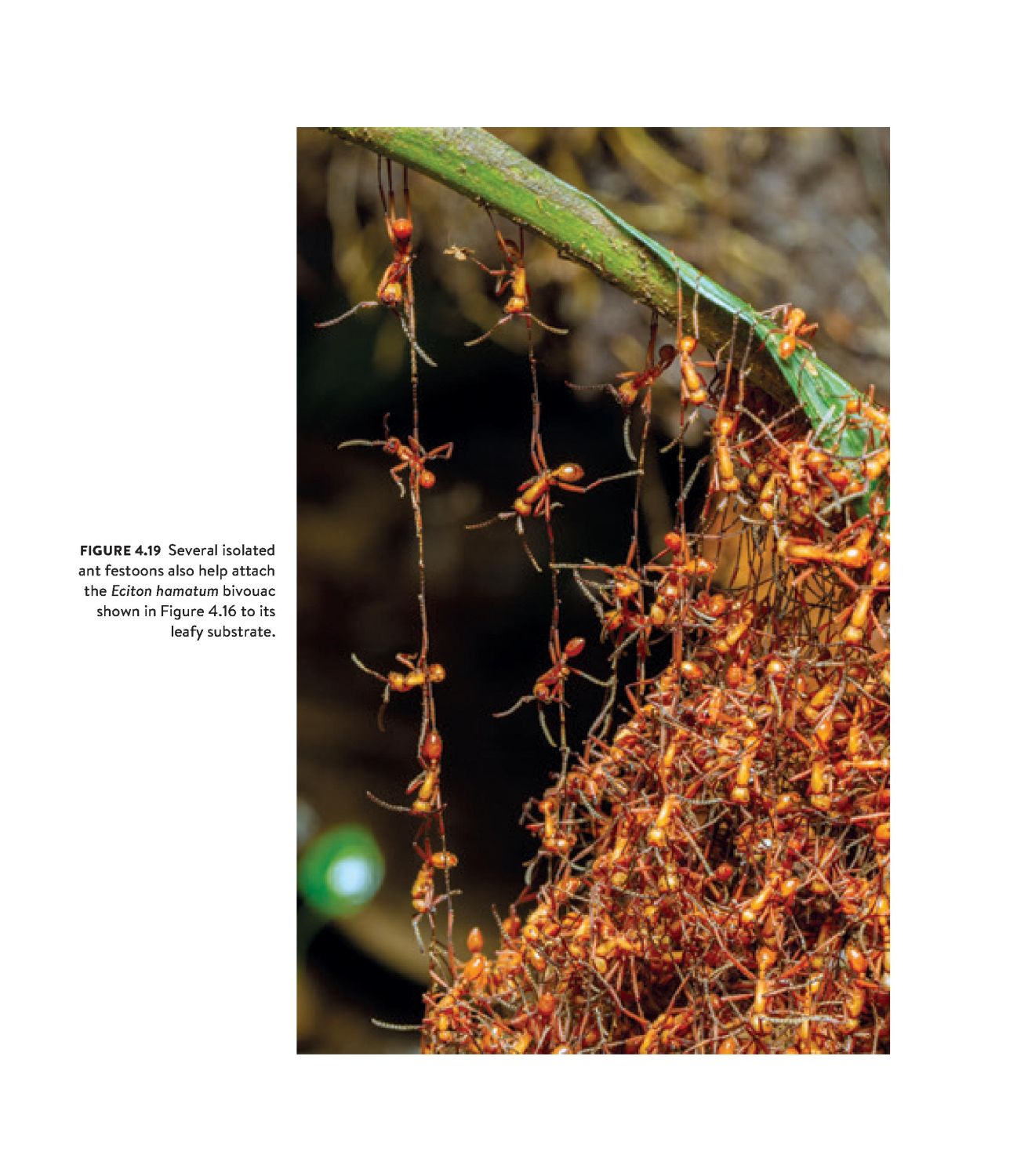 Add to that the extra layer of complexity that sees colonies oscillate between nomadic and settled (statary) phases in parallel with the reproductive cycle of the egg-laying queen. Or what of the rarely observed phenomenon of colony fission where new colonies are founded by one colony splitting up.

And the book does not run out of steam towards the end either. A final chapter explores the many (many!) insects and other organisms that have made an unlikely home inside or nearby army ant colonies, how they manage not to get eaten alive, and how they have adapted to a nomadic host. Kronauer introduces a veritable travelling circus of evolutionary adaptations that beggars belief.

“let me just point out the exquisite pictures, [Army Ants contains] some of the finest insect photography you will see this year.” 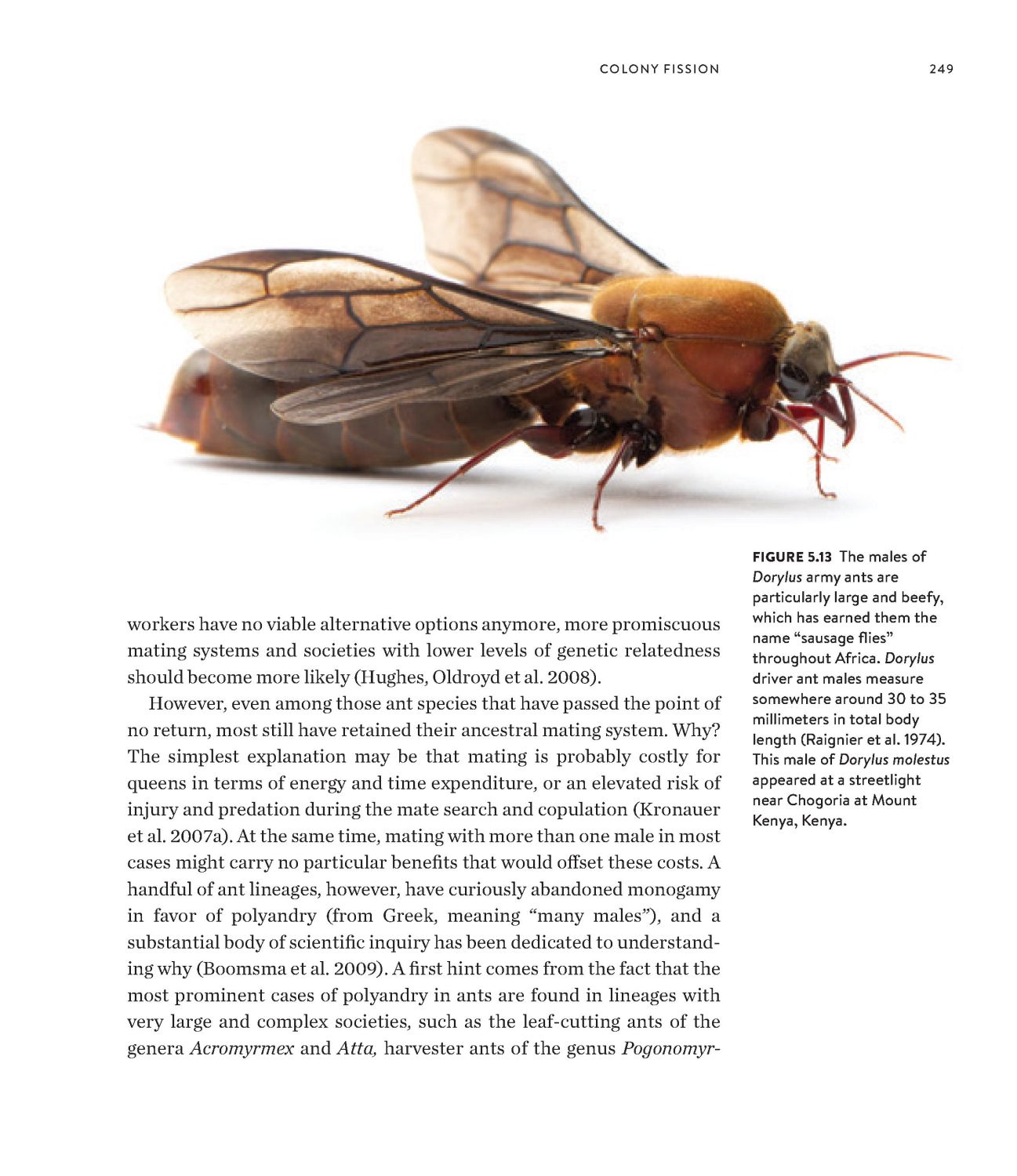 Whereas a book such as Desert Navigator was information-dense and, in places, technical, Kronauer presents his overview of army ant biology in an easy-going, narrative style that only occasionally descends into the nitty-gritty, e.g. when discussing colony fission in the context of inclusive fitness theory. As such, he can get away with including only a handful of infographics and data tables – his clear delivery does not require more. An extensive glossary helps clarify discipline-specific terminology. Simultaneously, his broad overview of the literature and the numerous citations point the reader to all the details in case you want them.

Now, if that was not enough to convince you to read this book, let me just point out the exquisite pictures, for Kronauer is also a gifted photographer. His shot of an army ant bivouac won him the award in the “Insect Behaviour” category of the Wildlife Photographer of the Year 2019 competition, and he contributed virtually all the photos here. 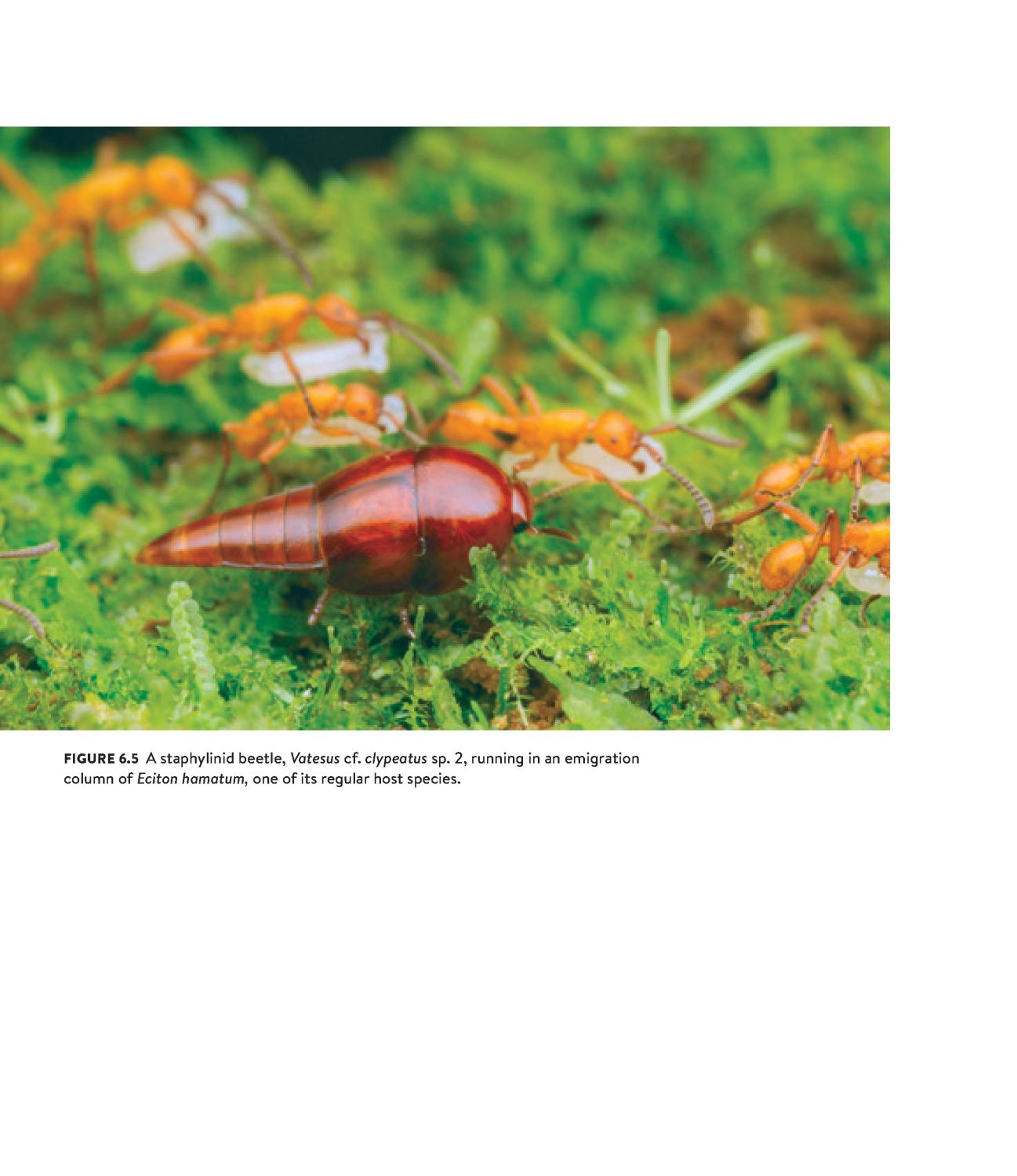 From jaw-dropping pictures taken in the field to phenomenal close-ups in the studio, this book will show you ants in ways you have never seen them before. A nice bonus is that in the figure legends Kronauer can provide unique information on how certain photos were taken.

I was really looking forward to this book when it was announced earlier this year and it far surpassed my expectations. Kronauer writes of army ants in a skilful and reader-friendly way and accompanies it by some of the finest insect photography you will see this year. This is a superb book that will take pride of place on your bookshelf.