To figure out how old a tree is, all you have to do is count its rings, and some truly ancient trees grace the pages of this book. But, as tree-ring researcher Valerie Trouet shows, that is the least fascinating thing you can derive from wood. Revealing the inner workings of the academic field formally known as dendrochronology, Tree Story is an immersive jaunt through archaeology, palaeoclimatology, and environmental history. A beautifully written and designed book, it highlights the importance and usefulness of tree rings in reconstructing past climate and linking it to human history.

Tree Story: The History of the World Written in Rings, written by Valerie Trouet, published by Johns Hopkins University Press in May 2020 (hardback, 246 pages)

The first things that struck me when opening Tree Story were the beautifully designed endpapers (more on the illustrations later). At the front of the book is a world map with thumbnails of important trees and sites, and what chapters they feature in. At the back is a timeline of key historical periods and events, both human and climatological. Too few publishers make use of this, so we are off to a great start. 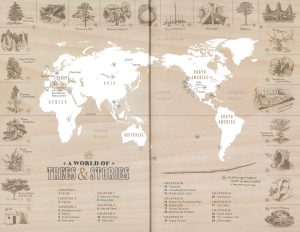 The first few chapters of Tree Story provide an excellent introduction. Trouet traces the history of dendrochronology to its unlikely birthplace in the Arizona desert, explains how tree rings are actually formed in living trees, and how, based on fluctuating climatic conditions, their appearance changes. Years with good growing conditions result in wider rings, while challenging years with droughts, storms, or other climatic upheavals result in narrower rings. That last factor is key when it comes to dating (in the chronological sense): the unique pattern of wider and narrower rings acts as a barcode. By looking at many trees in different parts of the world, researchers have constructed large databases of overlapping tree ring patterns that go back millennia. Using these can tell you how long ago a certain tree died, and therefore how old a wooden object or building is.

Having covered these basics, the bulk of Tree Story consists of a series of immersive chapters that look at some of the most interesting studies done using tree rings. For one, they play an important role in palaeoclimatology. The historical record of weather stations only extends back a few centuries, so to reconstruct past climates, palaeoclimatologists use proxies: indirect traces that correlate with climate. These have been collected from ice cores, lake sediments, stalagmites, and, of course, tree rings. But the pattern of rings only reveals so much. The width of rings will not tell you if a tree was stressed because of drought or cold, for example. By looking closer with lab instruments you can measure the wood density in individual rings, and that is primarily determined by temperature. It was one of the many proxies used by climate scientists to reconstruct the famous hockey-stick graph of past temperatures.

“harvest dates […] of trees used in the construction of historical buildings […] has revealed phases where building activity peaked, alternating with periods where plagues or the collapse of empires saw construction grind to a halt.” 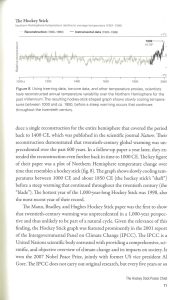 Researchers have also compared harvest dates of thousands of trees used in the construction of historical buildings. This has revealed phases where building activity peaked, alternating with periods where plagues or the collapse of empires saw construction grind to a halt. One prominent example is the complex decline of the Roman Empire, which was illuminated (as Trouet gracefully acknowledges here) in Kyle Harper’s excellent book The Fate of Rome. Wood in historical buildings or archaeological dig sites can also cast a light on the history of regional deforestation and the ensuing timber trade as people started importing wood from forests further away from major population centres. This is the subtle art of dendroprovenancing.

Even more jaw-dropping is the link Trouet has drawn between tree rings, shipwrecks, and pirates. Hurricanes that rip leaves and branches off trees result in years of poor growth, leaving a visible mark in the tree-ring record. But hurricanes also sink ships. And when she compared the historical record of shipwrecks with that of hurricanes captured in tree rings, the two matched beautifully. At the same time, an extended period of reduced sunspot activity known as the Maunder Minimum reduced temperatures and, with it, storm activity, coinciding with the Golden Age of Piracy from approximately 1650-1720.

“Even more jaw-dropping is the link Trouet has drawn between tree rings, shipwrecks, and pirates. […] As you keep reading, the exciting examples of cross-disciplinary science underpinned by tree rings just keep coming, right up to the final chapter.” 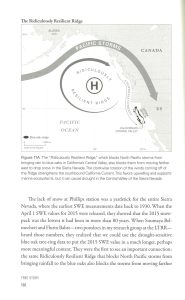 As you keep reading, the exciting examples of cross-disciplinary science underpinned by tree rings just keep coming, right up to the final chapter. The impact of past volcanic eruptions such as Tambora. The fluctuations of the jet stream blowing high up in the atmosphere that shows in tree rings at ground level. The amazing story of how a suspected large earthquake in the Pacific Northwest was confirmed by historical records of a tsunami of unknown origin in Japan.  The history of forest fires and different fire regimes read from tree scars. The Little Ice Age in Europe and how it was cleverly exploited by the Dutch. Some authors, notably archaeologist Brian Fagan, have build careers on investigating the link between climate and the rise and fall of nations, although Trouet is quick to point out that it is an oversimplification to think that climatic changes alone topple civilizations. Other factors are just as important in determining the resilience of societies.

The clarity of Trouet’s explanations stands out, as does the book’s pacing: chapters are just the right length and never outstay their welcome. Thoughtful little extras are the glossary, the list of tree species, and separate lists with references and recommended reading. Add to this her personal stories and anecdotes based on a twenty-year career. She strikes the right balance between entertaining the reader without overshadowing the scientific narrative. And she moves you: these stories will make you laugh, cringe, or (in the case of the relentless persecution that followed the publication of the hockey-stick graph) anger you.

“A massive shout-out to the illustrator, Oliver Uberti. […] His [infographics] are uniform, clean, crisp, legible, clearly labelled, and (importantly) designed to be printed in grayscale – and those lovely endpapers really turn the book into a keepsake.” 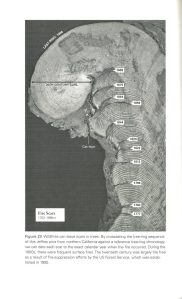 Without wanting to take your attention away from the wonderful book that Trouet has written here, I want to give a massive shout-out to the illustrator, Oliver Uberti. His style looked familiar and I realise I have previously heaped praise on his infographics when reviewing Who We Are and How We Got Here. His illustrations give the book a certain cachet and are uniform, clean, crisp, legible, clearly labelled, and (importantly) designed to be printed in grayscale – and those lovely endpapers really turn the book into a keepsake. Publishers and authors should pay close attention and be lining up to commission him.

Tree Story is a sublime example of what booksellers have lately started calling smart non-fiction: sophisticated academic books for a broad audience (often published by American university presses) that are just a few notches above the yuck or wow-factor of more generic popular science. The excellent clarity and pacing that Trouet brings to this fascinating topic meant I that tore through Tree Story in a day. If I added ratings to my reviews, this book would be a ten out of ten. Already, this is a very strong contender for my book of the year.

Harper’s The Fate of Rome paperback

Behringer’s Tambora and the Year without a Summer hardback

McMichael’s Climate Change and the Health of Nations paperback

Mann’s The Hockey Stick and the Climate Wars paperback

Reich’s Who We Are and How We Got Here paperback