The history of life is punctuated by major transitions and inventions: fish that moved onto land, reptiles that turned into birds. But how did these happen? In Some Assembly Required, Professor of Organismal Biology and Anatomy Neil Shubin provides an up-to-date and utterly engrossing account of the latest thinking on the great transformations in evolution. And he has one clue for you: nothing ever begins when you think it does… 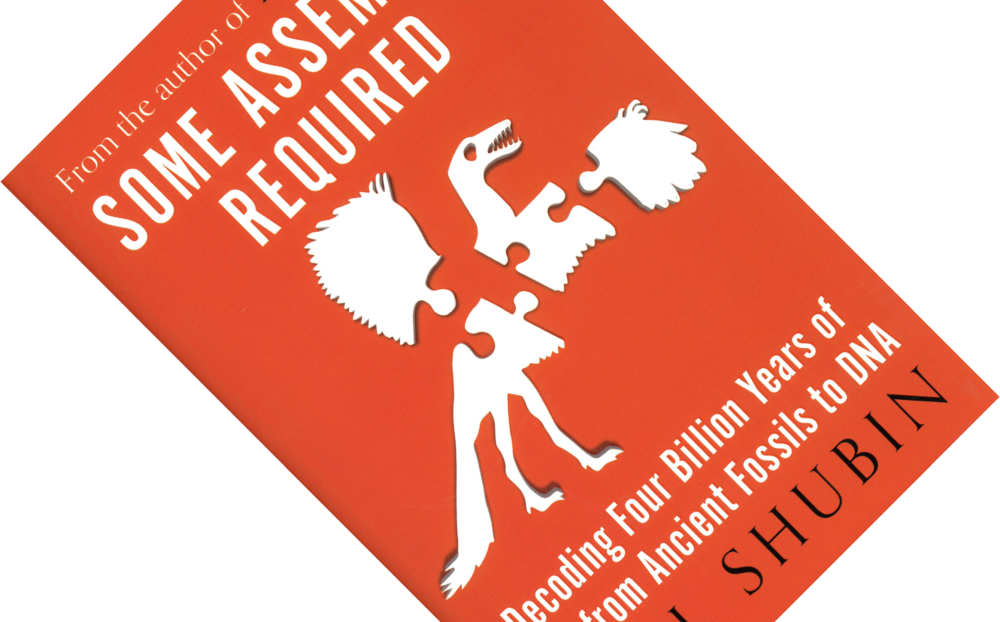 When Charles Darwin formulated his ideas, he was candid about weaknesses and gaps in his thinking. Shubin opens the book with one vocal critic, St. George Jackson Mivart, who thought Darwin’s ideas were flawed. If evolution is a process of gradual changes via mutation and natural selection, then how are major transitions supposed to arise? It sounds like a sensible question and to this day creationists like to trot out this argument. Darwin had five words for Mivart (and I am not building up to an obscenity-laden punchline here): by a change of function. Shubin beautifully clarifies this on page 27: “innovations never come about during the great transitions they are associated with”. I am just going to step back while you read that sentence again.

What Shubin gets at is that evolution takes shortcuts. Rather than inventing new traits from scratch, it repurposes existing ones. Examples Shubin gives are air-breathing in fish, which was repurposed to make lungs in land animals, and feathers on dinosaurs that originally evolved in a different context, but were repurposed for flight. Shubin has spent a research career working on our fishy ancestor, Tiktaalik rosaea, which was the subject of his previous book.

This is but one of the many ways in which evolution can achieve rapid and major transitions. Subtle changes during embryonic development can have large impacts later in life. Shubin introduces German naturalists Karl Ernst von Baer, who observed that early-stage embryos of different species looked very similar, and Ernst Haeckel, who took that idea too far with his motto “ontogeny recapitulates phylogeny” and took some liberties with his famous embryo drawings.

The real kicker here? Walter Garstang and the sea squirt.

“innovations never come about during the great transitions they are associated with. I am just going to step back while you read that sentence again.”

Sea squirts hatch as free-swimming tadpoles, complete with nerve cord, gill slits, and a connective tissue rod, a sort of proto-backbone. Adult sea squirts lose all this when they metamorphose. Garstang proposed that the ancestor of all vertebrates resulted from the freezing of larval traits during sea squirt development. I came across this before when reviewing the rather technical Across the Bridge, where Henry Gee mentions it almost off-handedly on page 167: “Paedomorphosis produced the ancestor of vertebrates”. You would be forgiven for missing the significance of that sentence. Shubin’s talent lies in turning this observation from a “What…?” into an “Oh my god!” moment.

Or take Félix Vicq D’Azyr’s realisation that some body parts are copies of each other. Ray Lankester’s observation that species can evolve by losing traits. (The evolution of limbs repeatedly involves the loss or fusion of bones, always in the reverse order in which they are formed, a sort of last in first out principle: last formed first lost). Stephen Jay Gould’s thought experiment of “replaying the tape of life” and the question of how repeatable evolution is. (The answer: quite.) Lynn Margulis’s idea of endosymbiosis. Or Nicole King’s work on choanoflagellates: the single-celled creatures you have never heard of that can form colonies and are the closest living relative to multicellular life forms.

Time and again, Shubin shows how evolution can reuse, repurpose, or rejiggle already existing structures and processes. I don’t know about you, but these kinds of spine-tingling revelations were what drew me to study biology.

Another powerhouse of innovation is DNA, and genetics can tell us much about evolution. These sections are a giddy ride where Shubin highlights one after another stupendous concept. Take the huge similarity between e.g. chimps and humans: genome sequencing revealed some 95%-98% similarity. Why are we so different then? Because DNA is not just a molecule containing gene after gene. Like a circuit board, it is a network, where some pieces of DNA function as switches that turn other genes on and off. This is the field of evolutionary development or evo-devo and offers another way for small changes to have big effects. (On a side-note, it would offer a possible mechanism for Noam Chomsky’s proposed single mutation that led to human language, see my review of Why Chimpanzees Can’t Learn Language and Only Humans Can.)

Hox genes control the development of whole body segments and can be repurposed to make other structures, such as limbs. Most DNA does not even code for anything and Susumu Ohno surmised it results from copying processes gone wild, whether gene, chromosome or whole-DNA duplication (biologists call this last one polyploidy, it is common in plants). And then there is Barbara McClintock’s discovery of jumping genes: selfish genetic elements that multiply and willy-nilly insert themselves all over a DNA molecule. If rogue replication sounds an awful lot like cancer, well, that is because it is – evolution and cancer are closely linked. And how about this? If such a jumping gene mutates and becomes a genetic switch, they can insert switches all over a genome. Dramatic new traits that at first sight would require an unlikely number of separate mutations suddenly become a whole lot more plausible. One example Shubin provides is the evolution of pregnancy.

Even viruses are not exempt. You might remember that a virus commandeers a host’s biochemical machinery for its own reproduction. Some viral genes can end up in the host’s DNA by accident or, in the case of retroviruses, by design. This viral DNA can be neutered and repurposed, offering another option for rapid evolution. We even have turned this into a powerful biotechnological tool, CRISPR, that allows fine-scale gene editing, rather than the previous blunt tools of genetic modification.

“DNA is not just a molecule containing gene after gene. Like a circuit board, it is a network, where some pieces of DNA function as switches that turn other genes on and off. This […] offers another way for small changes to have big effects.”

Shubin reveals there is a plethora of pathways to rapid evolution and sudden transformations. Some Assembly Required is a very pleasant mix of the latest science, the historical roots of ideas, and the people behind them. Not infrequently, these stories of discovery show multiple people converging on the same idea at the same time (as was the case for Darwin and Wallace). Or show people being far ahead of their time, resulting in them being ignored or even ostracized for heretical views. The latter, sadly, involves a fair share of brilliant women whose ideas were initially not taken seriously.

Like a spider in a web, this book sits in the centre of a large number of topics I have been reading about, lighting up paths of intellectual enquiry branching off in different directions. For a moment, while reading this book, I was a young student again, attending lectures, and getting acquainted with mind-blowing ideas. Frequently funny and always eloquent, Shubin’s power as a science communicator is to make you fall in love with evolutionary biology all over again.

Gee’s Across the Bridge paperback

Archibald’s One Plus One Equals One paperback

Taylor’s Not a Chimp paperback

Donations
Follow The Inquisitive Biologist on WordPress.com
Join 1,413 other subscribers