I will make no secret of my love of J.R.R. Tolkien’s works. Equally, I am always entertained by books looking at the science behind fictional worlds depicted in books, movies, and TV series. The Science of Middle Earth is a remarkable undertaking, with three editors bringing together contributions on a wide range of topics, from humanities such as sociology and philosophy, to natural sciences such as geomorphology, chemistry, and evolutionary biology. Tying it together are Arnaud Rafaelian’s beautiful drawings that immediately draw your attention. Both a serious appreciation of Tolkien’s world and an entertaining work of popular science, this book hit the sweet spot.

The Science of Middle-Earth: A New Understanding of Tolkien and His World, edited by Roland Lehoucq, Loic Mangin, and Jean-Sébastien Steyer, illustrated by Arnaud Rafaelian, published by Pegasus Books in June 2021 (hardback, 432 pages)

Before I delve in, a couple of things to note. First, virtually all contributors to this book are French because this is a translation (courtesy of Tina Kover) of the French book Tolkien et les Sciences, published in 2019 by Belin Éditeur. Second, this is not the first book by this title. Some of you might be familiar with Henry Gee’s two editions of The Science of Middle Earth and wonder how the two compare. Unfortunately, I do not actually have this book, and my impression is that it has flown under many people’s radar. However, looking at some previews suggests that its tone is similar (popular science rather than scholarly analysis) and that there is some overlap in topics (mithril, spiders, and oliphaunts immediately caught my eye). You will certainly want to read this book if you have Gee’s book, and conversely, even after reviewing this book, I still want to read his take on the subject.

For this book, astrophysicist Roland Lehoucq, science magazine editor Loïc Mangin, and palaeontologist Jean-Sébastien Steyer have brought together no fewer than 37 contributors from a wide range of academic disciplines to contribute 40 chapters under six thematic headings. The sheer breadth of topics is quite astonishing. The book opens with the humanities: the sociological character of certain races and alliances, the relatedness of the many fictional languages Tolkien created, the depiction of philosophy in the books, or the historiography that characterises his work. Tolkien spent an inordinate amount of effort on describing how myths and legends had been passed down the ages, all the way from the god-like Ainur and Valar, through the Elves, to the men and Hobbits in the Third Age. He even blurred the lines between fiction and reality, fashioning himself a chronicler rather than a creator, supposedly translating texts that had come to him from Ælfwine, an Anglo-Saxon mariner.

Most of the book, though, deals with the natural sciences, with chapters covering e.g. the geomorphology and climate of Middle-Earth, the chemistry of the One Ring, the anatomy of Hobbit feet, the possible link between oliphaunts and extinct and extant proboscideans, the birds observed in Middle-Earth, the biology of dragons such as Smaug and Glaurung (and the question of whether they could fly), or the nature of the tentacled Watcher in the Water that guards the entrance to the mines of Moria. And that is to name but a few! The one notable topic absent here, other than a chapter on vegetation zones, is botany. However, seeing how thoroughly this was covered in Flora of Middle-Earth, this is quite understandable.

“Could Ents exist? There are real-world examples of animals resembling plants, and Ents could be imagined as chimaeras of giant, photosynthetic stick insects capable of sessile periods.”

Most of these chapters take one of two approaches. First, several authors examine where Tolkien could have gotten his inspiration from, turning to history and mythology. Luc Vivès and Christine Argot remark that “Tolkien’s work is unique in that it forms the first interface between cycles, sagas, and epics on one hand, and nomenclatures, dictionaries, and encyclopedias on the other […] coming as close as possible to being a study of the natural world perceived mythologically, and mythology perceived as natural” (p. 277). They call his world a “cosmogenic melting-pot” with traces of biblical texts, Celtic legends, Welsh folklore, Norse fairy tales, Scandinavian Eddas, Icelandic sagas and the Kalevala, Finland’s epic poem. Other authors comment on the places that inspired Middle-Earth, examine the sources of Tolkien’s dragons, or ask how much of the character of Beorn the man-bear draws on the legendary Viking berserker warriors. 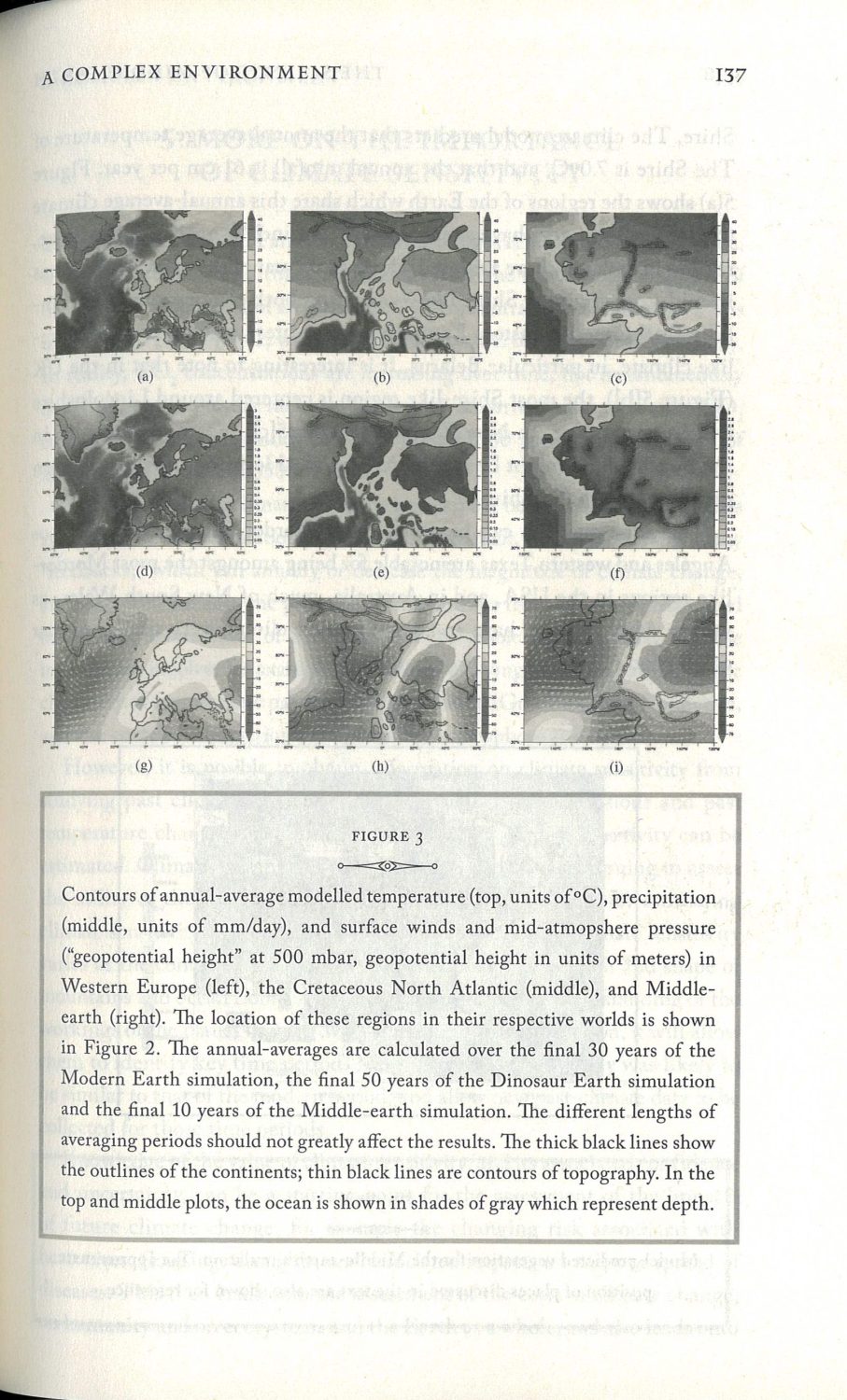 The second approach many chapters take is to probe the realism of Middle-Earth. Though Tolkien openly denounced scientific materialism and the technological totalitarianism it fostered, he was at the same time a rigorous scholar who strived for internal consistency in his fiction and spent a lifetime creating a highly detailed and believable world. Some of his ideas violate laws of nature: scaling relationships make the flight of dragons and giant eagles highly improbable. Other ideas are reasonably plausible: one chapter discusses the possible properties explaining the excellent eyesight of Elves. Some are even close to realistic: could Ents exist? There are real-world examples of animals resembling plants, and Ents could be imagined as chimaeras of giant, photosynthetic stick insects capable of sessile periods, rooted on the spot like corals.

Some chapters reflect on the state of science in his time—volcanology in the 1930–50s was not what it is today and the theory of plate tectonics only became accepted decades after his works had been published. Others consider how Tolkien’s work shows his interest in, and knowledge of, disciplines such as speleology, mining, and metallurgy. Yet others are a springboard for expositions on e.g. materials science (how would you make an invisibility cloak or a metal such as mithril?) or are entertaining thought experiments. Can we run a climatological model for Middle-Earth or draw up a phylogenetic tree for the humanoids populating it? Yes we can, and this is what it would look like.

“The editors have done a formidable job reigning in all contributors, as I am sure they could have written a great deal more about their respective topics.”

This book is squarely for the Tolkien fan. Now, some people in the fandom take his work very seriously. Those who have delved into the 3-volume Tolkien Companion or the J.R.R. Tolkien Encyclopedia, or read publications by professional Tolkien scholars such as Christina Scull, Wayne G. Hammond, or Verlyn Flieger might find this book lacking in depth. My impression is that they are not the primary audience—this is popular science rather than scholarly treatise. I would actually argue that the brevity of these chapters, the vast majority of which run 7–10 pages only, is admirable. The editors have done a formidable job reigning in all contributors, as I am sure they could have written a

great deal more about their respective topics. Nevertheless, they all approach their subject thoroughly and seriously, going well beyond Middle-Earth as described in The Hobbit and The Lord of the Rings. Many authors consider details from The Silmarillion, the 12-volume History of Middle Earth, Tolkien’s letters, and other writings on and by him, as well as, occasionally, Peter Jackson’s movies.

Finally, I have to commend Arnaud Rafaelian‘s beautiful and tastefully executed drawings. As much as I worship Alan Lee (his pictures grace my walls), it is refreshing to see Tolkien’s world depicted by a new illustrator. Also worth mentioning are the infographics, most of which are drawn by Dianne Rottner whose style meshes perfectly with Rafaelian’s. Add illustrated endpapers and decorated initials opening each chapter and this book is, in one word, sumptuous in its presentation.

Unbeknownst to me, there is a thriving Francophone Tolkien community out there. I think that Pegasus Books did very well in picking up this book for translation—this was very much worth the effort. The Science of Middle Earth comes warmly recommended for Tolkien fans and is already a precious addition to my collection.

Edit: Since publishing this review several people have pointed out that, unfortunately, this book contains various factual errors, which has disappointed serious fans. Others have pointed out that many contributors lack relevant in-depth knowledge and argue oversights could have been addressed had the book been proofread by one or more Tolkien scholars. I normally steer clear of reading other reviews when preparing mine, so as not to be influenced by other people’s words and ideas too much, but in this case that bit me in the behind—and is, yes, a bit embarrassing. I still think that overall this is an entertaining pop-science book that is beautifully presented, but serious Tolkien fans might also want to have a look at Kristine Larsen’s extended review in the Journal of Tolkien Research, volume 12(2) to make up their mind.

The Science of Middle-Earth

Harvey’s The Song of Middle-Earth

Garth’s The Worlds of J.R.R. Tolkien

Ogden’s The Dragon in the West

Knoepfler & Knoepfler’s How to Build a Dragon or Die Trying

Tolkien’s The Lord of the Rings