When I recently reviewed The Real Planet of the Apes, I casually wrote how that book dealt with the evolution of Old Work monkeys and apes, ignoring New World monkeys which went off on their own evolutionary experiment in South America. But that did leave me wondering. Those New World monkeys, what did they get up to then? Here, primatologist Alfred L. Rosenberger provides a comprehensive and incredibly accessible book that showed these monkeys to be far more fascinating than I imagined.

Most people are probably not very familiar with these monkeys. Technically known as platyrrhines, they are predominantly arboreal (i.e. living in trees), small to medium-sized primates. You might know the insanely loud howler monkeys from nature documentaries. Perhaps you have heard of capuchin monkeys or spider monkeys. But you could be forgiven for not having heard of marmosets and tamarins, or the even more obscurely named titis, sakis, and uacaris. A total of 16 genera are recognized, but outside of the scientific literature and abovementioned technical books, these monkeys are not all that well known. And that is a shame as, from an evolutionary perspective, this is a unique group.

Now, before Rosenberger gets to this, it helps to better know these monkeys. Accompanied by many excellent illustrations and photos, the first half of New World Monkeys is dedicated to their ecology, behaviour, and morphology. Topics covered include their diet and dentition; locomotion and the anatomy of hands, feet, and prehensile tails; but also brain size and shape; and their social organization and ways of communicating via sight, sound, and smell.

The platyrrhines are a diverse bunch with some remarkable specialisations. In the family Cebidae we find the smallest members, some of whom, the Marmosets and Pygmy Marmosets, have teeth specialized for gouging the bark of gum trees and feeding on the gum that is released in response. In the family Pitheciidae we find the only nocturnal member, the Owl Monkeys, which have concomitant morphological adaptations such as enlarged eyes. In both this and the closely related Titi Monkeys, individuals have the adorable habit of twining their tails when e.g. socializing or sleeping. The family Atelidae is home to species with exceptionally prehensile tails whose underside ends in a pad with a fingertip-like surface. The Muriquis and the aptly-named Spider Monkeys use them as a fifth limb in locomotion, as demonstrated by a striking photo of a Black-faced Spider Monkey on plate 13. Here we also find the well-known Howler Monkeys, whose skull is heavily modified to support the exceptionally loud vocal organs in their throat and neck.

“[…] the whole radiation has been remarkably stable for at least 20 million years. Today’s New World monkeys are virtually unchanged from their ancestors […] This stands in sharp contrast to the evolutionary history of Old World monkeys […]”

Despite these differences, platyrrhines are closely related and form what is called an adaptive radiation. Just like the textbook example of Darwin’s finches, many members have evolved unique adaptations and ways of living to minimise competition and maximise resource partitioning. Two ideas feature prominently in this book to explain how platyrrhines have evolved and what makes this adaptive radiation both so diverse and so interesting.

One idea is what Rosenberger calls the Ecophylogenetics Hypothesis. If I have understood him correctly, this combines information on a species’s ecology and phylogeny, its evolutionary relationships. It can offer hypotheses on how ecological interactions have evolved, but it also recognizes that ecological adaptations are shaped and constrained by evolutionary relatedness. For the platyrrhines, taxonomically related members are also ecologically similar. To quote Rosenberger: “[…] phylogenetic relatedness literally breeds resemblance in form, ecology, and behavior” (p. 96) and “Each of the major taxonomic groups that we define phylogenetically is also an ecological unit […]” (p. 97).

The other idea that makes the platyrrhines so interesting is dubbed the Long-Lineage Hypothesis. An extensive chapter on the fossil record documents how the whole radiation has been remarkably stable for at least 20 million years. Today’s New World monkeys are virtually unchanged from their ancestors, living the same lifestyles and occupying the same ecological niches. Some fossils have even been classified in the same genus as their living counterparts. This stands in sharp contrast to the evolutionary history of Old World monkeys where there has been a constant churn, whole groups of primates evolving and going extinct with time.

“Without ever losing academic rigour or intellectual depth, Rosenberger quietly proves himself to be a natural-born teacher and storyteller […]”

What stands out, especially when Rosenberger starts talking taxonomy and evolution, is how well written and accessible the material here is. He takes his time to enlighten you on the history, utility, and inner workings of zoological nomenclature, making the observation that “names can reflect evolutionary hypotheses“. Here, finally, I read clear explanations of terms such as incertae sedis (of uncertain taxonomic placement), monotypic genera (a genus consisting of only a single species), or neotypes (a replacement type specimen). Similarly, there are carefully wrapped lessons on how science is done – on the distinction between scenarios and hypotheses, or how parsimony and explanatory efficiency are important when formulating hypotheses. 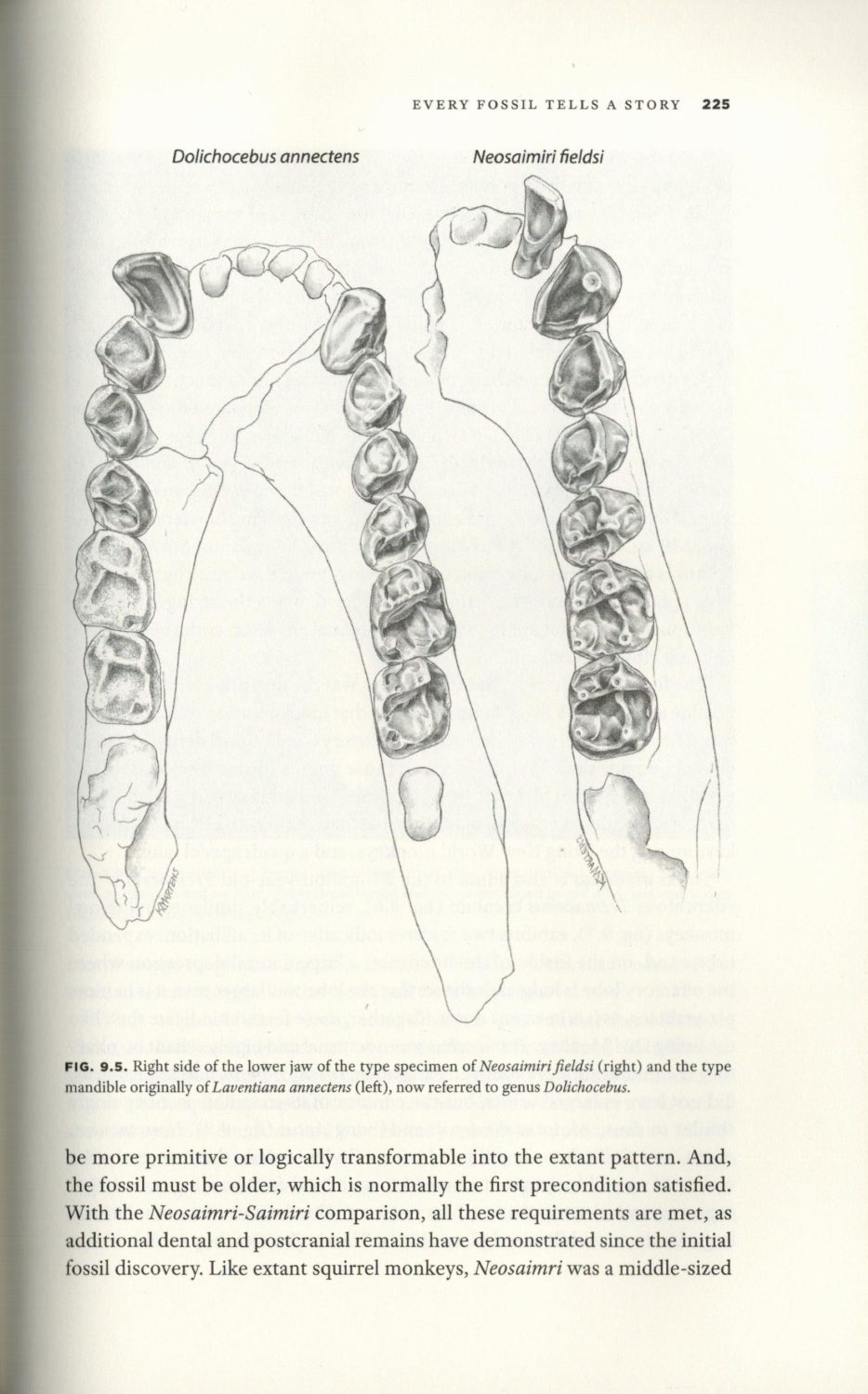 Without ever losing academic rigour or intellectual depth, Rosenberger quietly proves himself to be a natural-born teacher and storyteller, seamlessly blending in the occasional amusing anecdote.

A final two short chapters conclude the book. One draws on the very interesting question of biogeography, i.e. on how platyrrhine ancestors ended up in South America, which was long an island continent. Rosenberger convincingly argues against the popular notion of monkeys crossing the Atlantic on rafts of vegetation* and in favour of more gradual overland dispersal. The other chapter highlights their conservation plight as much of their tropical forest habitat has been destroyed by humans.

With New World Monkeys, Rosenberger draws on his 50+ years of professional experience to authoritatively synthesize a large body of literature. As such, this book is invaluable to primatologists and evolutionary biologists and should be the first port of call for anyone wanting to find out more about the origins, evolution, and behaviour of these South and Central American primates.

* One mechanism that Rosenberger does not mention is that tsunamis could be behind transoceanic rafting, as argued in a recent Science paper. This looked at marine species in particular and I doubt it would make much of a difference for terrestrial species. Most of the objections Rosenberger gives would still apply.

Begun’s The Real Planet of the Apes

Grant & Grant’s How and Why Species Multiply