Having just reviewed The Mosquito: A Human History of Our Deadliest Predator, I am continuing the theme of small things running the world. Here is another overlooked insect that literally moves mountains, doing the dirty job that nobody wants to do: the dung beetle. Entomologist Marcus Byrne has teamed up with popular science writer Helen Lunn for Dance of the Dung Beetles, a captivating and charming introduction to their cultural history, their role in the history of biology as a discipline, and some really funky contemporary research. 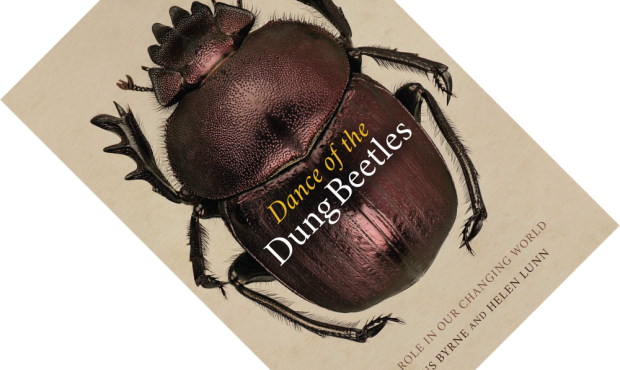 END_OF_DOCUMENT_TOKEN_TO_BE_REPLACED

The question of the tempo of evolution cuts right to the heart of evolutionary theory. Emeritus professor in evolutionary biology (and a list of other disciplines) Philip D. Gingerich here takes an empirical stab at quantifying how fast evolution happens, something which has not been done very often. The resulting Rates of Evolution is a technical monograph for an academic audience that contains thought-provoking ideas.

END_OF_DOCUMENT_TOKEN_TO_BE_REPLACED

Since being released on the world in 2012, the biotechnological tool CRISPR has been making headlines. Biologists used to rely on the relatively blunt tools of genetic modification, but this new tool is so precise and versatile that they now speak of gene editing instead. For people in a hurry, Nessa Carey here provides a primer on the powers and pitfalls of gene editing. Hacking the Code of Life is accessible to readers without much background in genetics, focusing more on the applications and the questions it raises than the nitty-gritty details of the tool itself.

END_OF_DOCUMENT_TOKEN_TO_BE_REPLACED

In my recent review of She Has Her Mother’s Laugh: The Powers, Perversions, and Potential of Heredity, I mentioned how the concept of heredity has become ever fuzzier the more we have learnt about how traits can be passed to the next generation. We have come from a very gene-centric period in biology, but biologists Russell Bonduriansky and Troy Day are ready to shake up the field. Neither a Lamarckian redux nor an attempt to downplay the importance of genes, this book successfully argues that the time has come to take into account non-genetic forms of heredity. Along the way, they provide a very interesting history lesson on how we got here in the first place.

END_OF_DOCUMENT_TOKEN_TO_BE_REPLACED

After the recently published Lamarck’s Revenge: How Epigenetics Is Revolutionizing Our Understanding of Evolution’s Past and Present left me little the wiser on how epigenetics actually works, I decided to track down a copy of Nessa Carey’s The Epigenetics Revolution. As one of two popular books published around the same time, it seemed like a good place to start. Peter Ward was right about one thing, this is indeed a landmark book, even if it is now a few years old.

END_OF_DOCUMENT_TOKEN_TO_BE_REPLACED

As one of several intellectuals who wrote about evolution before Darwin, time has not been kind to the French naturalist Jean-Baptiste Lamarck (1744-1829). Reviled during his lifetime by the influential Cuvier, after his death he became best remembered, and ultimately ridiculed, for the idea that characters acquired during an organism’s lifetime are passed on to its offspring. With the rise of the modern field of epigenetics, some of his ideas are making a comeback, albeit modified and adapted for the 21st Century. Palaeontologist and astrobiologist Peter Ward would even like to go so far as to restore some honour to his name and consider epigenetics a neo-Lamarckian process.

END_OF_DOCUMENT_TOKEN_TO_BE_REPLACED

After I read and reviewed Who We Are and How We Got Here: Ancient DNA and the New Science of the Human Past, I thought I knew about the changes to the story of human evolution based on studies of DNA. And given that Ancestors in Our Genome was published a few years before that book, I was curious what it could add to what I had been reading so far. As it turns out, a lot. As with my previous review, I should preface this one with the same warning that things are about to get complicated…

END_OF_DOCUMENT_TOKEN_TO_BE_REPLACED

When I opened this book and read its sales pitch (I paraphrase: “What if I told you of a new fortune-telling device that can predict psychological traits – it’s called the DNA revolution!”) I raised my inquisitive but sceptical eyebrow somewhat. Did I just pick up another piece of pop-psychology pulp? Oh boy, was I wrong! Behavioural geneticist Robert Plomin has written an incredibly interesting book with Blueprint, explaining how rapid advances in DNA sequencing technology are opening vast new vistas on the genetics underlying psychology. And is it ever so different, and more complex, than what hyped-up newspaper headlines have tried to sell us so far.