When it comes to popular science books, some of the books I admire most are the smallest ones. It takes great skill to capture the essence of a subject into a short book, steer clear of well-trodden ground, and contribute something novel that will educate and enthuse your reader. Palaeontologist and science communicator Dean Lomax here collects ten short essays on dinosaurs, convincingly showing that good things come in small packages. 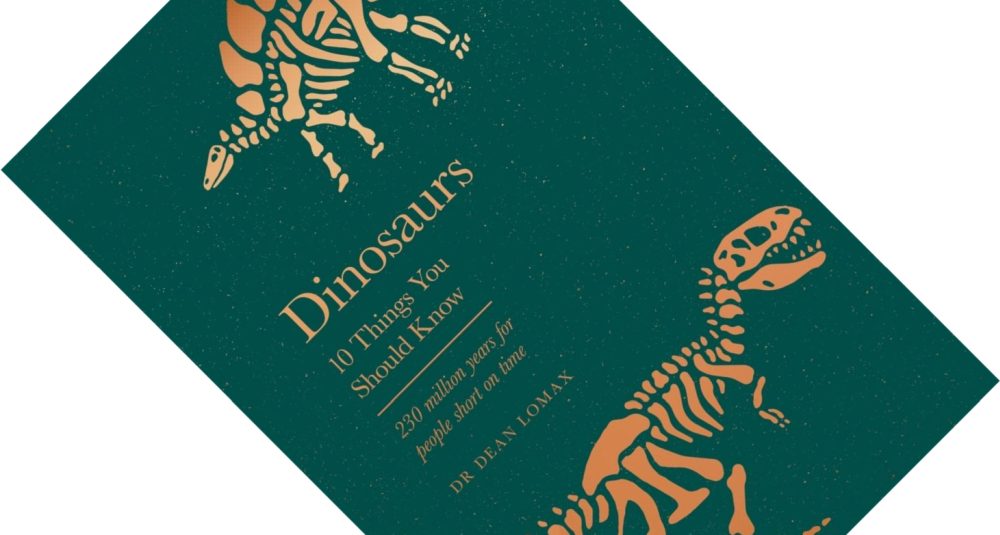 This small hardback is part of the 10 Things You Should Know series by Seven Dials, a popular science series that has so far covered physics, astronomy, mathematics, and neurology. Entry-level popular science books on dinosaurs, especially those aimed at children, often fail to go beyond factoids such as who was the biggest or who had the strongest bite. Sure, “these are cool topics to study, but they are not necessarily at the top of the research list for palaeontologists. Some of the most important research areas to explore focus on the bigger pictures of evolution” (p. 114). Thus, Lomax here makes pop science subservient to his primary goal of covering some of the hottest and most relevant topics grabbing the attention of professional palaeontologists today—from food, sex, and death; to deep time, biogeography, and the limits of our knowledge. And though he discusses fossil evidence of behaviour, the subject of his previous book Locked in Time, he avoids the easy option of rehashing material from that book.

Some of these essays do an excellent job of using familiar tropes to explain an important concept. As the first essay clarifies, Tyrannosaurus rex and Stegosaurus never crossed paths. Lomax gently dispels the popular media portrayal of dinosaurs all existing simultaneously, in the process introducing you to deep time. Stegosaurus was already a fossil by the time T. rex evolved. And while early dinosaurs roamed the supercontinent of Pangaea, the drifting apart of the continents meant that later species evolved in separate environments. In making this observation, this essay introduces concepts such as plate tectonics, the supercontinent cycle, and biogeography.

“[…] what I appreciated most in this book: Lomax repeatedly stresses how science is a dynamic process, not a static monolith of knowledge.”

Lomax is also not shy of cracking open the door to reveal the complexities and subtleties once you delve deeper. Having discussed how you define a dinosaur and introduced the division between saurischians and ornithischians, he mentions the 2017 study that proposed shaking up the dinosaur family tree, and how this is being tested and debated. This is what I appreciated most in this book: Lomax repeatedly stresses how science is a dynamic process, not a static monolith of knowledge. Point in case are feathers in dinosaurs and the growing realisation that birds might be related to…; no, they might actually be the descendants of…; no, wait, they are dinosaurs. What I did not realise is that Thomas Henry Huxley already advocated this idea shortly after the publication of Darwin’s On the Origin of Species, but that it was downplayed and ignored until John Ostrom revived it in the 1970s.

Another strong suit of this book is that it shows that you can be both brief and accurate in popular science. When introducing Darwin’s theory of natural selection he avoids that old chestnut of “survival of the fittest” and correctly characterises it as a stochastic process where “those animals with features better adapted to their environment have a higher chance of surviving and reproducing” (p. 98). And he acknowledges that Alfred Russell Wallace arrived at this idea around the same time as Darwin did. Thus, in just two sentences, he hits the nail on the head regarding two aspects of the theory of evolution that frequently get mischaracterised. Similarly, when discussing the idea of bringing back mammoths via a process known as de-extinction, he writes: “if this were to be successful, the resulting creation would never be an actual mammoth, but some oddball hybrid crossed with a modern elephant” (p. 116). And with that single sentence, he lays bare a major philosophical stumbling block of this controversial idea.

As befits a popular science book, there are plenty of interesting titbits (Why did Michael Crichton depict Velociraptor the way he did in Jurassic Park?), fascinating questions (Will we ever find all dinosaurs that ever existed?), and a healthy dose of humour. Entertaining and remarkably educational, this short book is perfect for both novice and seasoned palaeontology fans. Since we have entered December, I am going to earmark this book as a recommended stocking filler.

Dinosaurs – 10 Things You Should Know

Livermore’s The Tectonic Plates are Moving!

Mitchell’s The Next Supercontinent

Darwin’s On the Origin of Species (150th anniversary edition)

Costa’s Wallace, Darwin, and the Origin of Species

Wray’s Rise of the Necrofauna