This is the second of a two-part dive into the world of pterosaurs, following on from my review of Mark Witton’s 2013 book Pterosaurs. Almost a decade later, the well-known independent palaeontologist and palaeoartist Gregory S. Paul has written and illustrated The Princeton Field Guide to Pterosaurs. Admittedly, a field guide to extinct creatures sounds contradictory. Really, this is an illustrated guide for the palaeo-enthusiast in which Paul’s signature skeletal reconstructions take centre stage.

The Princeton Field Guide to Pterosaurs is divided into two halves: an introduction, and the group and species accounts. The introduction opens with the history of pterosaur research, describes what kind of reptile pterosaurs were and who they were related to, and gives some basics on dating fossils. The problem Witton flagged up in 2013 holds a decade on: clear transitional fossils showing how pterosaurs became airborne are still lacking. Paul then introduces the world pterosaurs evolved in and I liked how he effectively zooms out to provide more context. What was the world like in the Triassic? What other organisms lived in it? How did all this interact throughout the approximately 162 million-year-lifespan of the pterosaurs? And what creatures exploited their ecological niche after they went extinct?

Most of the introduction is dedicated to pterosaur biology, giving an overview of anatomy, locomotion and flight, pneumatic skeletons, integument and colouration, physiology, sensory biology, diseases and injuries, behaviour, and metabolism and growth. Much of the material here agrees with what Witton wrote in 2013, but Paul provides a more thorough introduction to locomotion and especially flight. Where Witton covered flight in eight pages, Paul lavishes 22 pages on the topic, going into quite some technical depth by making thorough comparisons to birds, bats, and aircraft, and drawing on aerodynamics and aeronautics. Given the way he references classic fighter planes, I got the impression he has at least an abiding interest in aeroplanes. Another noticeable difference is that Paul is bolder in his assertions and opinions as to what 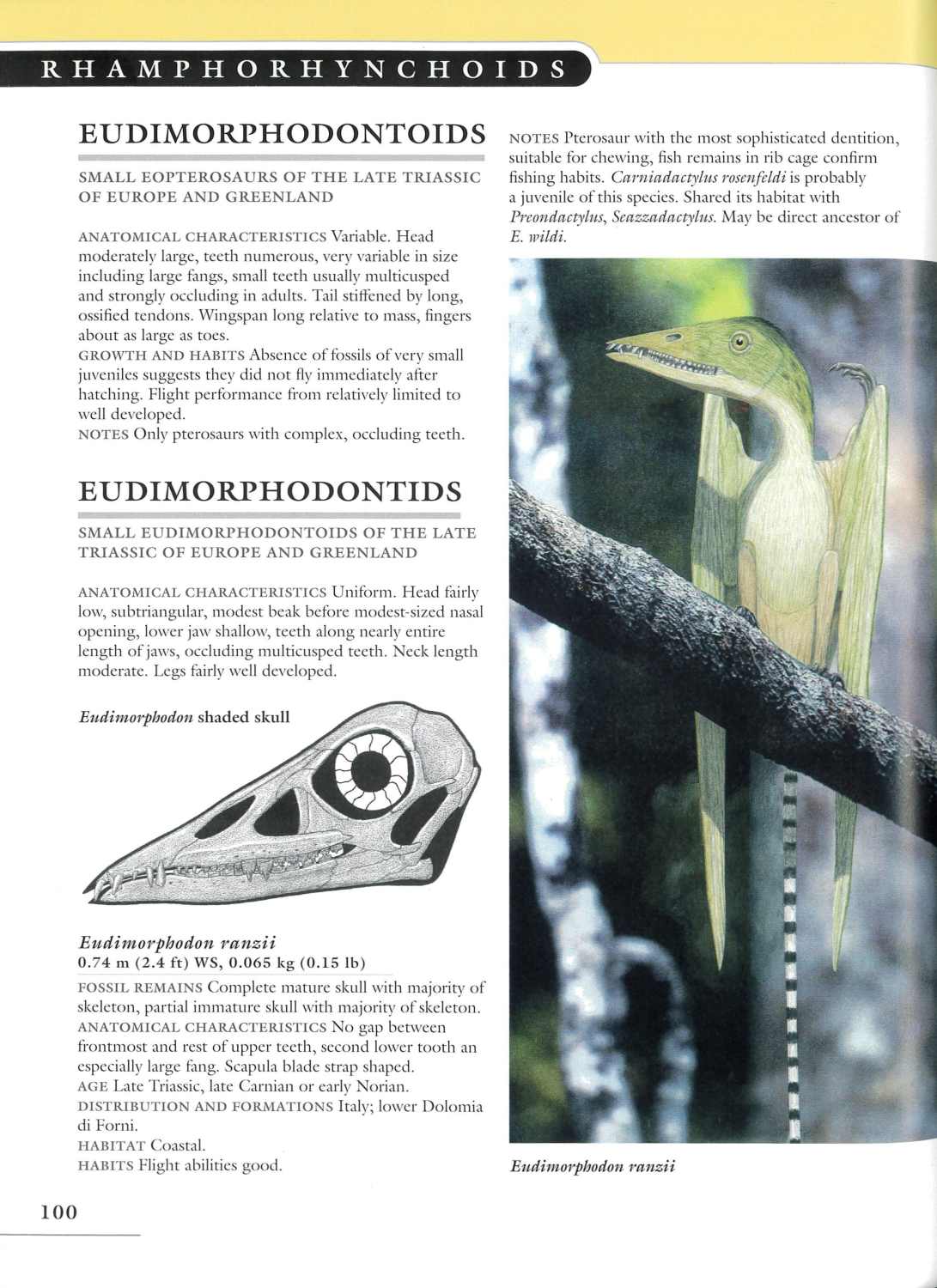 pterosaurs did or were capable of. For example, since reptiles and birds have full-colour vision extending into the UV range, “pterosaurs almost certainly did as well” (p. 70). I noticed the same in the species accounts, where data is presented in bullet-point-like statements, leaving little room to indicate how robust or speculative ideas are about e.g. lifestyles and foraging strategies of different species. A final section describes where fossils are typically found and how many species there might have been. Paul also engages in a bit of speculative zoology, imagining a spot of time travel to go on a pterosaur safari, and what might have happened had pterosaurs not gone extinct.

“Paul lavishes 22 pages on the topic [of flight], going into quite some technical depth by making thorough comparisons to birds, bats, and aircraft, and drawing on aerodynamics and aeronautics. “

The second half of the book discusses groups and species. Where Witton made taxonomy the leitmotif of his book, picking a phylogeny and dedicating a chapter to each major group, Paul refuses to put his nickel down. He recognizes the division between rhamphorhynchoids (a name he admits is obsolete but that he prefers over “nonpterodactyloid pterosaurs”) and pterodactyloids, divided into basal and derived forms. But since there is no consensus and phylogenetic studies are too conflicting for his liking, he shows no family tree. He does arrange species in a phylogenetic order, with derived groups nested inside basal clades, but he uses “a degree of personal choice and judgment in arranging the groups“, some of which reflect “my considered opinion, but most are arbitrary choices among a large array of competing research results” (p. 91). A second difference with Witton’s approach is that Paul writes the species entries as if this were a real field guide, with telegram-style entries describing size and weight estimates, known fossil remains, anatomy, geological age, location and geological formation of fossils, habitat, lifestyle, and other notes. This is the reference section of the book, collecting facts without guiding narrative.

A stand-out feature of this book is the illustrations, specifically the skeletal reconstructions. Paul’s signature style of white bones on the black outline of a body is well-known and one he has been practising for decades. Rather than full skeletons, most show only the bones that have been found for a species, positioned in the right place. Where sufficient fossil material is available, full skeletons are shown. Some of these, Paul mentions, are composites. For a few species, there is even enough material to show hatchlings, juveniles, or immature individuals. Paul criticizes the quadrupedal launch pose used by Witton and others for skeletal reconstructions as visually awkward and obscuring wing shape and proportions. He instead shows animals taking off with the wing at the top of an upstroke. I actually agree with Paul’s choice of pose: it looks more familiar, resembling a large bird taking off. For a select few species, there are muscle studies, which he admits are speculative but based on sound anatomical principles, as well as life reconstructions. Lastly, there are some palaeoart pieces showing animals in their natural environment. I admit I was not fond of all of these; some show a pencil-drawn animal placed on a photographic background which is visually rather jarring. Notably absent are photos of fossils.

“A stand-out feature of this book is the illustrations, specifically the skeletal reconstructions. Paul’s signature style of white bones on the black outline of a body […] show only the bones that have been found for a species, positioned in the right place.”

So, what has happened in the world of pterosaur research since Witton’s 2013 book? Paul makes no particular point of highlighting significant advances, and without an expert background, the different approach of the two books makes it quite hard to determine this. Two studies that caught my attention were the evidence for pterosaurs eating cephalopods (quite logical) and a study on istiodactylid hyoid bones (the bone to which the tongue attaches). Obviously, Paul references new papers describing new species: China has continued to be a goldmine; Witton was

involved in the 2017 description of the giant azhdarchid Hatzegopteryx thambema; and I found the 2014 description of Ikandraco avatar equally interesting. The last one is mentioned as a potential skim-feeder, a foraging strategy Witton has strongly rejected before. Maybe this time it is for real?

To wrap up, how do the two books compare? Pterosaurs is more narrative-driven and Witton is more circumspect in his claims; The Princeton Field Guide to Pterosaurs is more data-dense and Paul is bolder in his claims. If you are completely new to pterosaurs I would actually recommend that you start with the former; I found its overview of the different groups more accessible. Then, if you want to read deeper into the details or need a reference work, the latter is a good follow-up; the two books complement each other nicely that way. If you already have Witton’s book, I think it is worthwhile getting Paul’s book. Next to being up to date, The Princeton Field Guide to Pterosaurs offers a different, sometimes more thorough take, and much more factual detail.

The Princeton Field Guide to Pterosaurs

Donations
Follow The Inquisitive Biologist on WordPress.com
Join 1,390 other followers