Take a look at the geological time scale*. Thanks to the dinosaurs, we have all heard of the Cretaceous, Jurassic, and Triassic. However, going back in time from the Triassic, the Phanerozoic Eon in which we live today stretches another 289 million years into the past; from the Permian that ended ~252 million years ago, through the Carboniferous, Devonian, Silurian, Ordovician, to the Cambrian that started ~539 million years ago. In The Greywacke, amateur geologist Nick Davidson tells the story of how those geological periods got their names and transports the reader back to the heydays of Victorian geology when three men would make Britain’s rocks the centre of international attention. In so doing, he unlocks for a general audience an episode in the history of geology that was so far consigned to more technical literature. 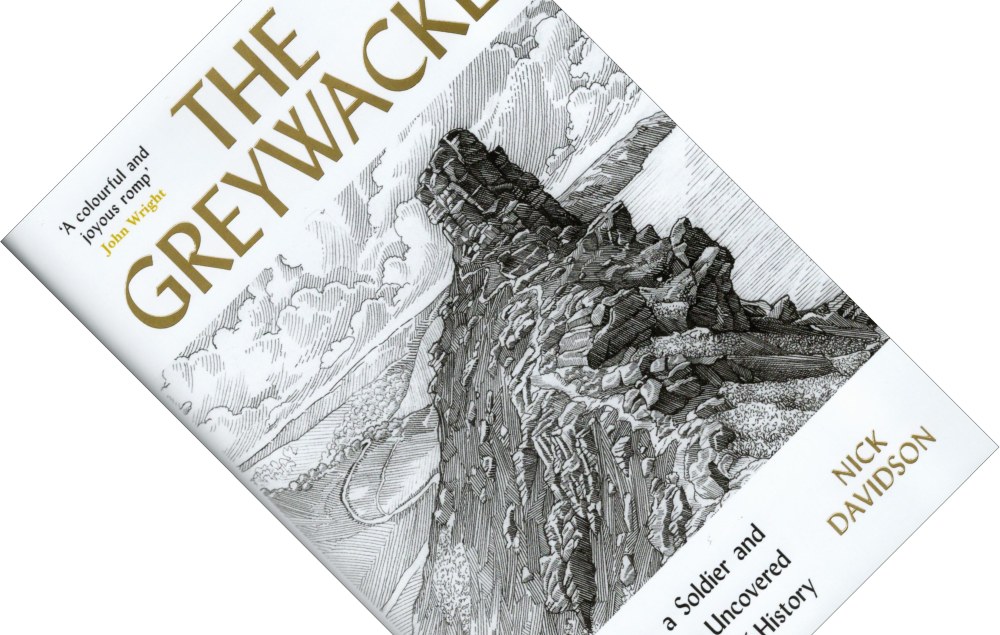 The Greywacke: How a Priest, a Soldier and a Schoolteacher Uncovered 300 Million Years of History, written by Nick Davidson, published by Profile Books in May 2021 (hardback, 280 pages)

When William Smith produced the first stratigraphical map of England and Wales in 1815, he was not able to further classify the rocks of Wales. A chaotic and incomprehensible jumble of hard-to-trace strata, they were collectively referred to as the titular Greywacke. Given that these rocks might contain the first evidence of life on Earth, they were of great interest to geologists. From 1831 to 1920, three scholars would spend their lifetimes deciphering them.

Davidson dedicates most of his book to the careers and achievements of Adam Sedgwick (1785–1873) and Roderick Murchison (1792–1871). Sedgwick split his time between his clerical duties as a priest and his academic duties as a geology professor in Cambridge. Murchison was a retired soldier with unfulfilled dreams of military glory and a family fortune to burn on his new geology hobby. Both were members of the Geological Society of London and, starting in 1832, decided to collaborate on cracking the identity of the Welsh rocks.

A very brief outline, which Davidson develops in detail over the course of nine chapters, runs something like this. Dividing Wales between them, both men identified a series of rock strata. Sedgwick called his seemingly older series the Cambrian and Murchison called his seemingly younger series the Silurian. The problem that they decided to largely ignore, and that would come back to haunt them, was whether these sequences overlapped in time or were separate. Sedgwick’s career subsequently stalled; doubts, procrastination, poor health, and the workload of clerical and administrative duties all took their toll. Despite encouragement from Murchison and other geologists, he was unable to develop a more sophisticated understanding of the Cambrian rocks, nor identify diagnostic fossils. Murchison, however, became a celebrity, his Silurian system widely adopted. In Devon, together with Sedgwick, he resolved confusion over the presence of younger Carboniferous strata amidst older Silurian rocks by designating the intermediate layer with anomalous fossils as Devonian. In western Russia, he identified the Permian, a new rock layer named after the Russian city of Perm. His book on the geology of Russia won him international accolades and he was basking in the fame and glory he never achieved as a soldier.

“the rocks of Wales, a chaotic and incomprehensible jumble of hard-to-trace strata, were collectively referred to as the Greywacke. […] From 1831 to 1920, three scholars would spend their lifetimes deciphering them.”

As Davidson details, though, Murchison’s fame had some shady sides to it. He rarely acknowledged the geologists and quarrymen who helped him in the field. He glossed over stratigraphical inconsistencies and fossil anomalies. And as he climbed the social ladder, his contemporaries noted in private his increasing arrogance and condescending nature. Younger geologists were quietly suspicious that his sweeping picture was hiding a more nuanced and complex story, but few would openly confront him. Two episodes, told here, illustrate why. By 1852, the souring friendship between Sedgwick and Murchison blew up over the above-mentioned overlap between Cambrian and Silurian strata in Wales that both men were laying claim to. Though new fossil evidence and surveys supported Sedgwick’s Cambrian designation, Murchison brushed those off as a local anomaly and never recanted his Silurian claim. Davidson puts it nicely: “it was clear they were fighting not only over territory, but also over different versions of what they considered the truth” (p. 173). The two men squabbled publicly until their deaths. Something similar happened when Murchison collaborated with a younger James Nicol on the rocks of the Scottish highlands. They also quickly came to different interpretations, with Murchison seeing a smooth succession of strata where Nicol saw a region of upheaval and a large fault line running through Scotland. Murchison would downplay Nicol’s findings and undermine his career, even though later work proved Nicol correct.

The third person in this story, the schoolteacher Charles Lapworth (1842–1920), is not introduced until the penultimate chapter. Working in southern Scotland, he would pioneer the use of graptolites, the microscopic remains of colonial marine animals, as fossil markers. Based on these, he would finally resolve the conflict between Sedgwick and Murchison, showing that the strata both men laid claim to for “their” geological period, were better interpreted as a separate period he called the Ordovician. This part of the book feels all too short. The reason, as Davidson explains, is that Lapworth’s archived notebooks, maps, and letters “still await a biographer to do justice to his quite remarkable achievements” (p. 234)**.

“Though written for a general audience, the depth of Davidson’s research stands out and will be appreciated by geologists and science history buffs.”

Many readers will likely have never seen the various rock types that Davidson describes here. Unfortunately, the book contains no colour photos, but Davidson has cleverly included various tables that clearly explain how Sedgwick, Murchison, and Lapworth assigned the various rock strata to geological periods. Also very helpful are Andrey Kurochkin’s simplified sketches of stratigraphical cross-sections. Another facet of this book I appreciated is that Davidson only briefly describes his own visits to many of the locations mentioned here. He never distracts you from the historical narrative by prominently inserting himself.

Though written for a general audience, the depth of Davidson’s research stands out and will be appreciated by geologists and science history buffs. He draws on collections of letters and biographies published in the 19th century, archival resources, and unpublished material contributed by other historians. Davidson explicitly acknowledges an intellectual debt to four books. Three of these—Martin Rudwick’s The Great Devonian Controversy (1985), James Secord’s Controversy in Victorian Geology (1986), and David Oldroyd’s The Highlands Controversy (1990)—were published by Princeton and Chicago. Their age means you would have to consult a library or, for bibliophiles such as myself, track down second-hand copies. The fourth influential book, Murchison’s Wanderings in Russia, was published posthumously in 2004 by the British Geological Survey and will not have seen wide circulation. By publishing with a trade publisher, Davidson has effectively unlocked an important piece of science history to a wider audience.

If you want to read beyond the few names that always crop up in the history of geology, such as Charles Lyell or James Hutton, this is a fascinating book on three scholars who left a lasting legacy in the names we still use today.

* Surely I am perfectly normal in having a laminated printout of the International Chronostratigraphic Chart within arm’s reach, right? Right?

** After this review went life, the Lapworth Museum responded that they are currently cataloguing his archive to make it more widely accesible. You can follow their progress on the museum’s blog.

Winchester’s The Map that Changed the World

Donations
Follow The Inquisitive Biologist on WordPress.com
Join 1,395 other followers