The Industrial Revolution has been a mixed blessing. Although it improved living standards and brought material prosperity to many, humanity and the environment have paid a high price, not least in the form of pollution. The Contamination of the Earth catalogues the many forms of past pollution but also examines the social and political aspects of it. In other words, how people were affected by it and responded to it, and how legislation and politics allowed it to happen, to persist, and to only grow with time. This sprawling and information-dense environmental history work does full justice to this large and serious topic, but be prepared for a read that is neither light nor uplifting. 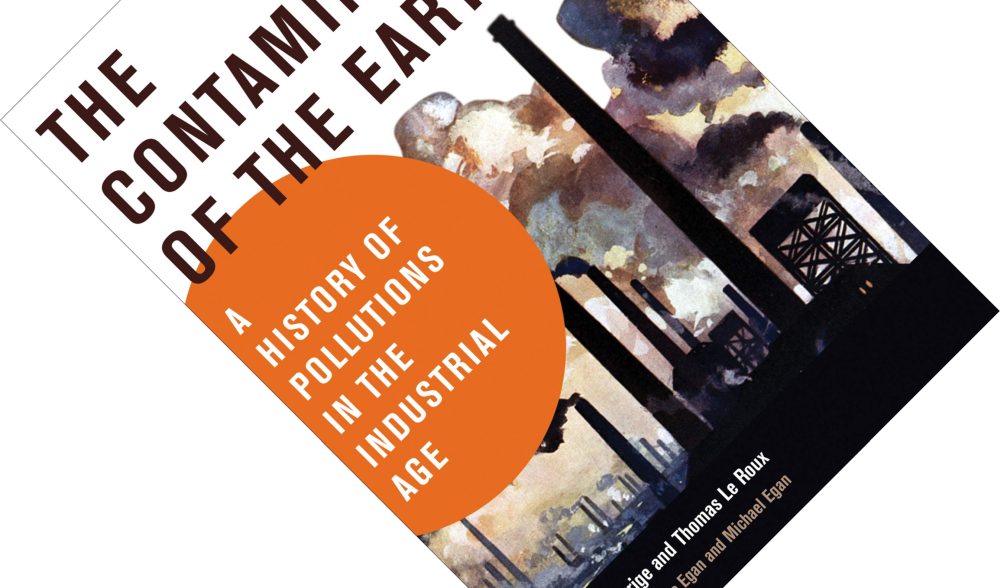 The Contamination of the Earth: A History of Pollutions in the Industrial Age, written by François Jarrige and Thomas Le Roux, translated by  Janice Egan and Michael Egan, published by MIT Press in July 2020 (hardback, 459 pages)

This book was originally written in French by historians François Jarrige and Thomas le Roux and published in 2017 as La Contamination du Monde by Éditions Seuil. MIT Press publishes it as part of their History for a Sustainable Future Series, translated into English by husband-and-wife duo Janice and Michael Egan. The latter is one of the series editors and in his foreword mentions their decision to adhere to the French plural “pollutions” throughout the book to stress the many forms they take and the many origins they have. To an English audience, some writing might come across as rather convoluted and descriptive. To me, this suggests that the translation never strays far from the original, capturing that certain je ne sais quoi of the French language.

The Contamination of the Earth examines the period 1700-1973 in three parts: the emergence of industry from 1700-1830, its intensification and entrenchment in society from 1830-1914, and its diversification and ascent to world domination from 1914-1973.

In my reading, this book presents two faces to its reader. The first is already implied by the subtitle: a historical overview of pollutions during the industrial age. Though not encyclopaedic, it gives a very good feel for the sometimes literally breathtaking diversity of pollutions, especially the many now-forgotten ones. It serves as a healthy corrective to the idea that the past was a green and pleasant land, describing the pollutions from early factories producing e.g. textiles, paper, gunpowder, and metals; and the environmental legacy of the early mining industry in South America. The story of the Industrial Revolution is normally one of coal, steel, and steam engines, but also saw the rise of a chemical industry that used increasingly toxic heavy metals and concentrated acids to refine ingredients and produce a wide array of everyday objects. The discovery of petroleum might have rid us of the pollutions of horses, but gave us those of motorised transport in return. And the 20th century added plastics, nuclear waste, new pesticides, the Green Revolution in agriculture, planned obsolescence, and, from the 1950s onwards, the double whammy of increased population and affluence during the Great Acceleration, to name but some topics explored here.

Several noteworthy themes emerge from this catalogue of waste. Despite their promises, many technologies only add more forms of pollution rather than displacing old ones. We still burn coal – more than ever in absolute terms actually – while Vaclav Smil cleverly titled one of his books Still the Iron Age. Another promise is that pollutions can be reduced, and efficiency increased, through technological inventions. Yet, the rebound effect means we inevitably consume and pollute more. One pernicious detail regarding mining is decreasing ore grades. We have extracted the richest ores first and need to mine and refine ever-larger amounts of raw material for the same quantity of metals, while simultaneously using more of them, multiplying pollutions dramatically. The authors do not mention the endgame to this (perhaps because it lies in the future), determined by energy returned on energy invested. Finally, some processes result in many more pollutions than is first apparent. Good examples from this book are wars and cars. The former obviously results in immediate destruction, but both world wars also involved mobilization phases in which environmental concerns were sidelined, while afterwards now-larger industries needed to find new ways to monetize their infrastructure. The latter are much more than just their tailpipe emissions, think production, maintenance, disposal, and an infrastructure that has created car-dependent landscapes. This is rarely mentioned in the current push for electric cars.

However, the real value of this book, and the one I think will be much appreciated by historians and other scholars, is the second face this book presents: the social and political history. Through numerous examples, Jarrige and Le Roux show that “between fatalism, resignation, complaints, and insurrections, pollutions were hardly accepted in tacit silence” (p. 143), and this is true throughout the history of industry. These concerns were expressed as much by the well-heeled as by the labourers on the factory floors. Simultaneously, some developments, such as electricity and industries setting up shop overseas, have created a divide between consumers and producers, rendering “almost imperceptible to the public the increase in emissions of toxic substances in the environment” (p. 237), at least in developed nations.

“today’s failed attempts at curbing and regulating pollution have a long history […] The same forces and dynamics […] are still at work, with techno-optimism and economic prosperity dominating the narrative”

What I found particularly enlightening is how the authors show that today’s failed attempts at curbing and regulating pollution have a long history. This takes you through some bizarre episodes such as the French hygienist movement that “was unmistakably a form of industrialism” (p. 119) and turned to chemistry to e.g. praise the antiseptic and health benefits of polluting fumes. It shows how, despite the difference in the type of law in force in the Anglo-American world (common law) versus mainland Europe (specific legislation on pollutions), the outcome was the same: fines and financial settlements that just became another line on company budgets. It shows the long history of industries denying and obfuscating evidence of pollutions and how sock-puppet scientists willing to sow doubt have been amongst us from the start. It shows how industry experts have dominated the conversation around solving pollutions, promoting recycling, dilution (think smokestacks), and the hollow promise of technofixes, but never questioning production itself. And how politicians, influenced by generations of industry lobbies and economic theories, have shown “a devoted and dedicated commitment to economic growth” (p. 320), treating pollutions as “acceptable, and even desirable” (p. 62).

The historical survey ends in 1973, just as the environmental movement gathered pace, famous NGOs were established, and green parties entered politics. The authors argue that the developments since then would require a separate book. Nevertheless, an extensive epilogue takes a first stab at this. As we know, what looked like a turn for the better was but a diversion. The same forces and dynamics outlined throughout the book are still at work, with techno-optimism and economic prosperity dominating the narrative and marginalizing the few voices who argue otherwise. Of note, they criticize the birth of the “paralyzing oxymoron” of sustainable development: “A propaganda tool for companies engaged in greenwashing [that] resembles more and more an empty promise used to maintain the status quo” (p. 297-98). And they highlight how globalization, supported by the shipping industry (and, might I add, the shady sector of commodity traders), has allowed developed nations to smugly clean up their act at home by offshoring polluting forms of extraction and production to other continents. “The problem of environmental injustice has been renewed on a global scale” (p. 310), effectively reaching its logical endpoint.

The 80+ pages of notes give an entry point to a huge field of literature, French and otherwise. Only one factor that has contributed to the continued increase in pollutions seem to be missing to me: that of shifting baselines, the idea that each generation takes the state of their environment as the new normal, leading to a form of generational amnesia. This, of course, highlights exactly why this book is worth your time. Overall, The Contamination of the Earth is an ambitious book that offers a global overview of the history of industrial pollution. I found that reading it weighed on my mind, but I take that as a good sign: if a book on industrial pollution does not cause you some anxiety it is not doing its job properly.

The Contamination of the Earth

Brown’s A History of Mining in Latin America

McShane’s The Horse in the City

Slade’s Made to Break

Closmann’s War and the Environment

Bryce’s A Question of Power

Blas & Farchy’s The World for Sale

Bowyer’s The Irresponsible Pursuit of Paradise