From the food we eat and the fuel we burn to the materials that make up our everyday objects—we live in a material world. The traders who get these commodities from producers to consumers are key players in the world economy, yet also some of the most secretive and least scrutinised. Javier Blas and Jack Farchy are two journalists who report on energy and natural resources for Bloomberg News. In The World for Sale, they rip the veil off this sector, exposing the often dubious and amoral ways in which some trading houses have amassed staggering fortunes. I expect that this eye-popping exposé, which sometimes reads more like a crime novel, will be warmly welcomed by both seasoned readers of business books and inquisitive passers-by. 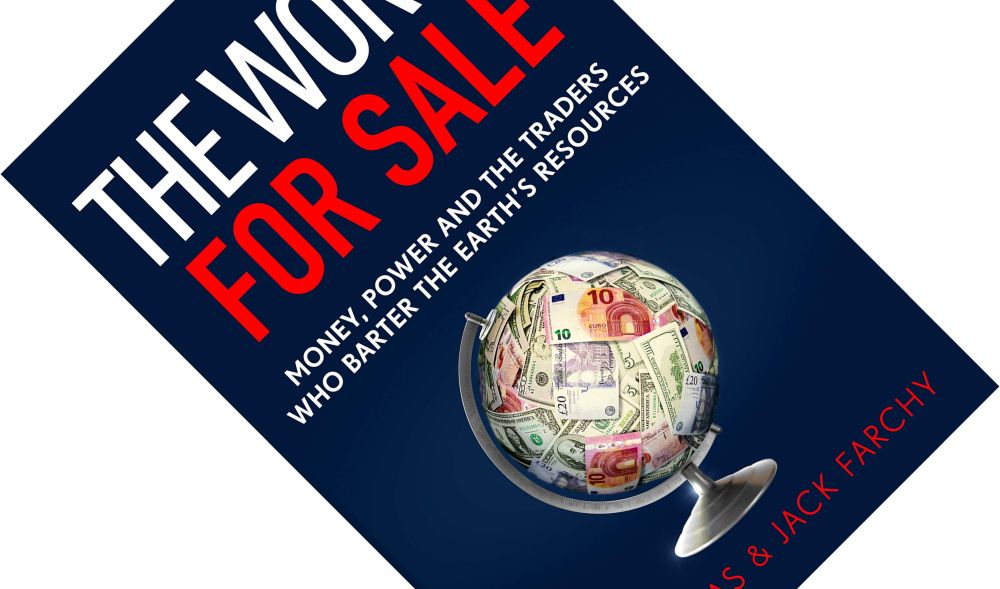 The World for Sale: Money, Power and the Traders Who Barter the Earth’s Resources, written by Javier Blas and Jack Farchy, published in Europe by Random House Business in February 2021 (hardback, 416 pages)

My first introduction to commodity traders was while reviewing Earth Wars, which mentioned that these companies seek to keep a low profile. Given my interest in resource extraction and depletion, The World for Sale lured like bait; I do not normally read business books, but this one seemed interesting and relevant. It did not disappoint.

Blas & Farchy draw on their twenty years of reporting during which they travelled to dozens of countries and spoke to the business partners and government officials who deal with traders. They also collected thousands of pages of unpublished documentation detailing their finances, organisation, and business networks. But most impressively, they have spent over a year interviewing more than a hundred current and former employees, CEOs, and founders of some of the biggest trading houses, many of whom only wanted to speak under the condition of anonymity. Several of them are currently under investigation and what Blas & Farchy reveal is only the tip of the iceberg. One former trader started his interview by saying “What I’m going to tell you is not going to be the whole truth and nothing but the truth. There are things I’m just not going to tell you” (p. 12). Nevertheless, this is without a doubt the most candid and probing look at this industry so far. Kate Kelly’s 2015 The Secret Club That Runs the World is the only other comparable book I am aware of.

Though international trade is centuries old, the authors start their history in the 1950s when companies such as Philipp Brothers and Cargill lorded over, respectively, metals and grain trading empires. International oil trade was only just being pioneered and one trader who became spectacularly successful in the 1970s was Marc Rich. He had an outsized influence on how trading houses did business for decades to come. From here on, Blas & Farchy chart the rise and fall of various large trading houses as they branch out into different commodity markets.

“[Blas & Farchy] rip the veil off this sector, exposing the often dubious and amoral ways in which some trading houses have amassed staggering fortunes”

The authors frame their history around four developments over the last 50-odd years that allowed these businesses to flourish, going from profits of millions to billions of US dollars. First was the advent of international oil trade, breaking the dominance of the seven US oil companies that came out of the 1911 break-up of the Rockefeller business empire. A second business opportunity was the 1991 collapse of the Soviet Union, with traders taking over the role of the state to get fossil fuels and metals to the market. The third growth boost was the urbanisation of China in the 2000s, with hundreds of millions of Chinese consumers entering an affluent lifestyle. Fourth was the trading houses benefiting from the growth of the banking sector and the various developments in how the global economy is financed.

At this point, you might shrug: “okay, so some people got filthy rich trading stuff”. However, success in this business depends on your willingness to adopt a certain mindset: “go everywhere, leaving politics and, in many cases, morality to one side” (p. 27). Marc Rich + Co happily traded with apartheid-era governments in South Africa and defrauded OPEC by abusing the discount they gave to developing African nations, setting up shell companies there to buy oil cheaper. Vitol circumvented the US trade embargo on Cuba, buying the country’s sugar and selling it Soviet oil (which you might or might not cheer on, depending on your views). They also employed a warlord accused of ethnic cleansing to settle some debts in former Yugoslavia. When Marc Rich + Co split into two new companies in 1992, both came under investigation. Glencore paid the Iraqi embassy bribes for the privilege of oil trade during Saddam Hussein’s regime, undermining the UN’s oil-for-food programme that funnelled oil revenues towards humanitarian goals. Trafigura got their hands dirty in a pollution scandal in Ivory Coast, selling highly toxic waste to a local contractor who promptly dumped it, causing some 95,000 people to fall ill.

These are but some of the many eye-opening examples Blas & Farchy give of the willingness of commodity traders to deal with dictatorial regimes, to trade in war-torn countries, to engage in bribery and corrupt practices, and to funnel dirty money through offshore companies—all in the pursuit of profit. What I appreciated, and no doubt readers familiar with economics and international trade will too, is that the authors are balanced in their reporting. Even though the above excesses speak for themselves, this book is not a smear campaign: “The worst examples of commodity traders’ behaviour do not define the whole industry” (p. 20). They agree with traders claiming to be apolitical: “in their commodity deals, [their] motivation is almost always coldly financial“. However, “even if political influence isn’t their goal, that doesn’t mean that the commodity traders are not influential” (p. 291). Another thing I liked was that Blas & Farchy explain unfamiliar trading practices and jargon, such as futures, spot markets, tolling, or commodity supercycles. This book is accessible without telling a simplistic story.

“What I appreciated […] is that the authors are balanced in their reporting. Even though the […] excesses speak for themselves, this book is not a smear campaign.”

How on Earth was this book written without the authors being sued to hell and back? In an interview before his death in 2020, Vitol chairman and CEO Ian Taylor was clear: “We would prefer you not to write it” (p. 10). The last two chapters clarify much. Glencore’s 2011 decision to become a public company was a bombshell. It entailed tremendous scrutiny from investors, journalists, NGOs, and governments, exposing not just Glencore but the whole industry. Most people, including the traders’ suppliers and buyers, had largely been unaware of just how much these companies enriched themselves. Other reasons are that finding information is faster, cheaper, and easier than ever before, eroding the traders’ competitive edge. Increased transparency makes bribery and corruption harder. And many mining and oil companies have grown to the point where they handle the logistics themselves. In short, this is a book whose time has come. But, warn Blas & Farchy, the days of the traders are far from over. For example, some profited from the COVID-19 pandemic by hiring a fleet of supertankers to temporarily store oil as prices nose-dived.

The book left me with a few observations. There are two accomplices that the authors, understandably, only briefly mention. One are the banks that, as the last chapter highlights, have recently been targeted by the US government who is turning the traders’ dependence on the US dollar against them. Two is Switzerland that stubbornly looks the other way while headquartering many of these companies. The book also reveals that commodity traders do not share two of my other concerns. Of Glencore’s CEO Ivan Glasenberg, Blas & Farchy write that “If he had any concerns about the impact of burning millions of tonnes of coal on the climate, he didn’t show it” (p. 188). And more generally: “If Big Oil and Big Coal are responsible for polluting the planet, the traders are their enablers” (p. 318). Even if there is talk of transitioning away from fossil fuels to renewable energy, the authors correctly mention that a brave new frontier awaits: the trade in rare metals. My other concern, that of extraction and ultimately depletion of non-renewable resources seems not to be on the radar of either the traders or the authors.

The World for Sale bravely exposes a sector that has largely escaped people’s attention. Urgent and eye-opening, this is a phenomenally well-written book that you can understand and enjoy even when you do not read, say, the Financial Times. If you are a consumer who cares where their stuff comes from, this book is mandatory reading.

The World for Sale

Kelly’s The Secret Club That Runs the World

Ammann’s The King of Oil