The word biology derives from the Greek words bíos (ß??? in Greek), meaning “life”, and -logía (-????a in Greek), meaning “branch of study”, and is usually defined as “the study of life”. But what is life? Remarkably, biologists cannot agree on a definition. Everyone can name clear examples of living and non-living things. However, as so often in biology, there is no sharp demarcation between the two. There is a grey area where things are, well, somewhat alive? Lifelike? It is these borderlands between life and non-life that famous science writer and journalist Carl Zimmer explores in Life’s Edge. Instead of providing an answer, this intellectually stimulating and rewarding book will help you understand why it is such a hard question to begin with. 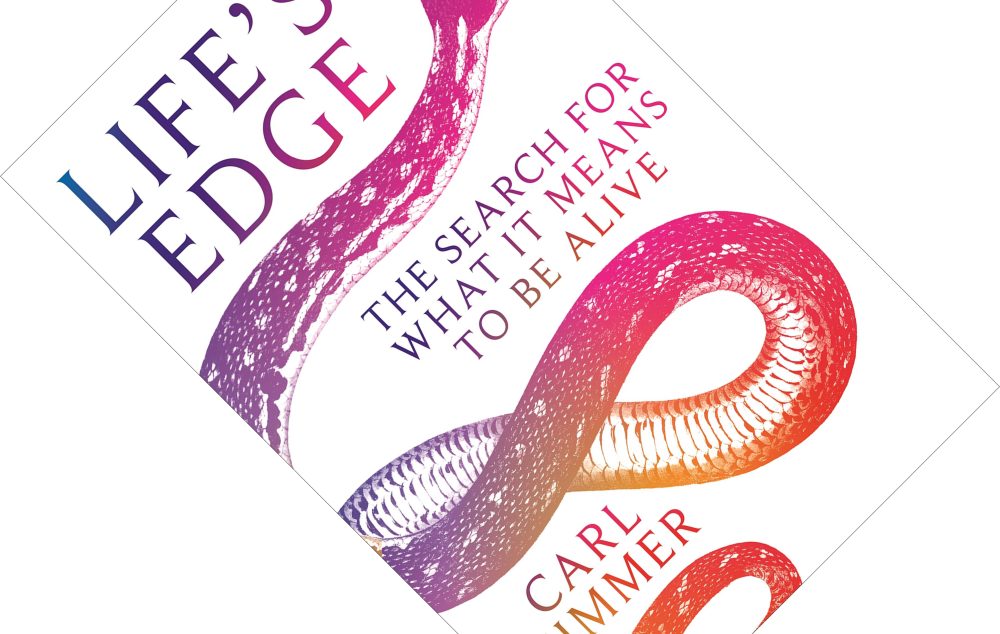 Life’s Edge: The Search for What It Means to Be Alive, written by Carl Zimmer, published in Europe by Picador in August 2021 (hardback, 347 pages)

Zimmer approaches this thorny question from different sides and has divided his book into four parts. Throughout, he speaks to scientists working on these matters, delving into their ideas. Zimmer starts by drawing in his audience with two subjects that matter deeply to all humans: birth and death. When does human life begin and when does it end? These seemingly simple questions have been legal and moral battlegrounds for centuries. The first has seen struggles over the right to abortion. “Life begins at conception” is a catchy phrase for anti-abortionists to rally behind, but matters are not that simple, argues Zimmer. For example, the first cell of a new human arises from the fusion of two living cells, and you can reason your way backwards through time; “You’d have to canoe up life’s river billions of years before reaching its headwaters” (p. 27). As he explained in-depth in She Has Her Mother’s Laugh, some twins merge early in development to become a human chimaera, giving rise to one person made up of two distinct populations of cells. Did two lives become one? Death is a similar battleground over the right to euthanasia. People in a coma are one inhabitant of the borderlands and the medical definition of death as brain death has its problems. Possibly, many patients retain a functional hypothalamus and one young woman went through puberty and started menstruation while on life support.

But the borderlands house many other, more bizarre examples. Zimmer speaks to the scientist who grows brain organoids – clumps of human neurons – in the lab. Before you recoil in horror, remember the Zika virus? This research immediately proved its value as a model system that gave a quick and relevant answer to how the virus attacks infant brain tissue. People who also oppose animal testing might want to reconsider their objections. Meanwhile, several invertebrate animals such as rotifers and tardigrades can be revived from lifeless states after decades, a phenomenon known as cryptobiosis. Viruses, Zimmer’s speciality, are generally considered non-living. And what of red blood cells? They contain no DNA. One fish species, the Amazon molly, is a hybrid resulting from the mating of two other molly species. Only female Amazon mollies are found. They are effectively sexual parasites, requiring the males from either parent species to reproduce.

“Everyone can name clear examples of living and non-living things. However, as so often in biology, there is no sharp demarcation between the two.”

Now, biologists do agree on some things, so Zimmer appropriately turns to the hallmarks of life next in five short chapters of 10-12 pages each. Life shows metabolism, though snakes ramp theirs up and down between meals to an extreme degree. How? They use their genes in unusual ways. In one of his trademark phrases, Zimmer writes that “Their genetic orchestra uses the same instruments as ours, but they were reading different sheet music” (p. 74). These kinds of imaginative metaphors are why I so thoroughly enjoy his books. Life gathers information, though slime moulds take this to an extreme. Their large cells explore their environment and find the shortest route to food without a brain. They are so good at it that it has given rise to its own branch of computing to solve complex problems. Life shows homeostasis, keeping its internal environment at a constant setpoint, though bats can radically alter their settings when hibernating. Life reproduces, though as e.g. maple trees show, most seeds never get a chance. Unique amongst these hallmarks, reproduction is optional. The trees that do grow into adulthood “are the product of a thin pedigree of success that has sliced through a vast field of reproductive failure” (p. 109). Finally, life evolves, which is perhaps its clearest hallmark: “Life continues to evolve today. It can no more escape evolution than water can escape being wet” (p. 113).

These hallmarks result from centuries of exploration, experimentation, and thought, so Zimmer next charts their long intellectual pedigree. This was an extraordinarily interesting part of the book, populated by many fascinating historical episodes and characters of which I can only serve up a few examples here. There was the battle between Descartes’s mechanical view of life and the vitalists who insisted on a vital essence animating life. There were the chemists chipping away at this notion experimentally, creating life’s organic molecules out of ordinary chemicals; or figuring out how yeast produced alcohol through fermentation, leading to the discovery of enzymes. There are cautionary tales such as Thomas Huxley’s Bathybius haeckelii and William Carpenter’s fossil Eozoön. These species of protoplasm, a primordial goo thought to be life’s precursor, both turned out to be chemical precipitates; nothing more than “deceptive crystallization“. Zimmer warns that “In the borderland between the living and the nonliving, conceptual mirages have a way of taking shape and gaining fame” (p. 166). And then there was Hungarian physiologist Albert Szent-Györgyi who discovered vitamin C, elucidated how muscle tissue works at a molecular level, and was a World War II spy for the allied forces. He was not convinced we would ever settle on a simple definition of life, observing that “We can find different features of life at different scales” (p. 180).

“Zimmer’s final take on the topic covers origin-of-life research and astrobiology […] these are not mere tangents, but highly relevant to the question of what life is […] and [I] was pleasantly surprised by how clued-in Zimmer is.”

Zimmer’s final take on the topic covers origin-of-life research and astrobiology. The first wrestles with the question of how non-living matter became alive, the second how we would recognize life elsewhere. Thus, these are not mere tangents, but highly relevant to the question of what life is. I have reviewed several books on these topics recently and was pleasantly surprised by how clued-in Zimmer is. Though not a complete account of origin-of-life research compared to The Genesis Quest, his potted history hits all the relevant notes. And though he primarily speaks to David Deamer, who argues lipid compartments came first, Zimmer is not beholden to this view. He also discusses the other major schools of thought that argue that RNA or metabolism came first. Similarly, when he touches on hydrothermal vents at mid-ocean ridges as a site for life’s origin, he also mentions alkaline vents and the possibility of life on moons such as Saturn’s Enceladus, discussed in Alien Oceans. Pleasingly, he adds details not mentioned in either book. This includes Deamer’s fieldwork in volcanic ponds in Kamchatka or Laurie Barge’s research on self-assembling crystal structures that might be present in Enceladus’s waters.

Zimmer first spoke to Deamer in 1995. However, he has not worked on Life’s Edge continuously since then, publishing many other books in the meantime. Reading between the lines, my impression is that Zimmer has gathered many ideas, interviews, and contacts over his decades-long career. At some point, he can just crystallize whole books out of the material he is sitting on. It makes you wonder how many other ideas for books he has tucked away in his mind. If they are all going to be such fascinating and satisfying reads as Life’s Edge, then I hope many more. This book reiterates that Zimmer is one of today’s finest science writers.

Zimmer’s She Has Her Mother’s Laugh