In the wake of the COVID-19 pandemic, many publishers have seen an opportunity to reissue previously published books on viruses and pandemics. As a reader, it is always difficult to know whether you are actually getting any updated content beyond the obligatory new preface or afterword, or whether this is just a quick cash-grab. Fortunately, the third edition of Carl Zimmer’s famous virology primer A Planet of Viruses is here to prove those suspicions wrong. 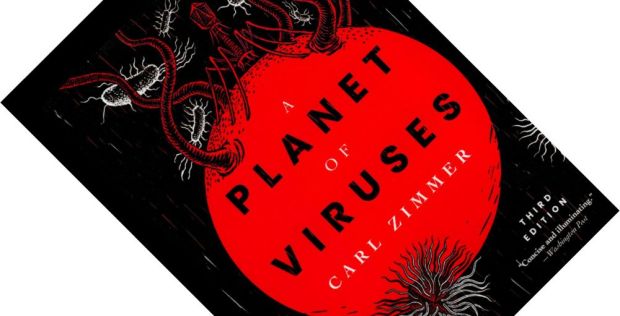 A Planet of Viruses, written by Carl Zimmer, published by the University of Chicago Press in March 2021 (paperback, 144 pages)

A Planet of Viruses was first published in 2011, followed by the second edition in 2015, and now the third edition in 2021. The book is a collection of short essays, many of which were originally written for World of Viruses, a National Institutes of Health-sponsored pop-science project to communicate virology to a wider audience.

In Zimmer’s trademark crisp prose, each of the twelve essays focuses on a particular virus or class of viruses while simultaneously explaining certain virology concepts. Thus the chapter on tobacco mosaic virus discusses how viruses were discovered and led to breakthroughs in microbiology, while the essays on rhinoviruses and influenza explain how our immune system combats viruses and how rapid evolution means viruses and their hosts are locked in a perpetual arms race. But there is hope. The short history of smallpox introduces the important concepts of variolation and vaccination, and how some viruses can, in principle, be eradicated.

Although each essay is short, Zimmer has the enviable quality to highlight interesting facets in each story. The essay on HIV explains the crossing of species boundaries by infectious diseases, zoonosis, the origins of HIV, and how this virus, to quote David Quammen, has since diversified “like an infectious starburst“. A piece on the West Nile Virus shows how viruses can go global, and how insect vectors such as mosquitoes can assist. And then there are the viruses that infect bacteria, bacteriophages, that outnumber us to a mind-boggling degree. As two of the essays here show, our world is a virosphere rather than a biosphere.

“Although the placenta is one of the features that made us mammals, this is ultimately thanks to a viral stowaway.”

Other essays delve into virus evolution. Studies of ancient DNA have not only revealed that our ancestors interbred with Neanderthals, but also that we may have acquired some of their viruses, such as the cancer-causing human papillomavirus. Retroviruses, meanwhile, go far beyond taking over a host’s cellular machinery: they nestle themselves into its DNA and remain there. Our genetic material is riddled with such endogenous retroviruses, one of which produces the protein syncytin that is vital for the formation of the placenta during pregnancy. This infection has ancient roots, as the virus’s genetic code is found throughout the mammalian family tree. Although the placenta is one of the features that made us mammals, this is ultimately thanks to a viral stowaway.

Viruses even force you to ponder philosophical questions such as the definition of life. Viruses are typically considered to be non-living. Yet, the essay on giant mimiviruses and their large genomes containing thousands of genes shows that these lines are blurred. Consider this essay a taste of things to come in Zimmer’s new book Life’s Edge. And as he did in She Has Her Mother’s Laugh when discussing genetic mosaics, he can implode your sense of identity with a single sentence. When discussing retroviruses he concludes that “There is no us and them – just a gradual blending and shifting mix of DNA” (p. 71).

“It was not until I looked at the references that I realised each essay has been updated with new research published in the last six years.”

By now you might be chomping at the bit. What about COVID-19? New to this edition is the essay “The Pandemic Age”, which has replaced “Predicting the Next Plague” on Ebola from the second edition. This introduces coronaviruses more generally, briefly chronicles how the SARS and MERS outbreaks proceeded and how COVID-19 differs, and discusses some of the molecular details, such as how it enters the host cell. This essay felt a bit thin on the ground and did not provide all that much new information, especially given that Zimmer has written interesting pieces on vaccines and the virus’s structure for the New York Times. I guess book publication and news cycles will forever be out of step with each other.

Now, before you conclude that this is a somewhat disappointing update on the previous edition, let me stop you there. It was not until I looked at the references that I realised each essay has been updated with new research published in the last six years. It would have been easy to just slap in the COVID-19 essay, send it off to the printers, and call it a third edition. This is not the case, however, which reflects very well on both the author and the publisher. Furthermore, this edition features stylish woodcut-like illustrations from Ian Schoenherr that open each chapter (though, unfortunately, there are no illustrations included to explain biological concepts).

A Planet of Viruses is a captivating primer to the world of viruses that requires zero background in biology. The brevity of the essays and the small size of this book make it a suitable first introduction to this fascinating part of our world. Even for a biologist such as myself, there is much to admire in Zimmer’s writing: these essays are miniature masterclasses in science communication. If, for some reason, you have so far missed out on this book then what are you waiting for? At this price and this size, you have no excuse not to indulge.

A Planet of Viruses (3rd edition)

Creager’s The Life of a Virus

Reich’s Who We Are and How We Got Here

Zimmer’s She Has Her Mother’s Laugh