When Google Earth first launched in 2001, I, like many others, found myself poring over satellite imagery. Identifying familiar and unfamiliar landmarks always brought a certain thrill, and spotting craters was part of that. But to properly map impact structures, you need a better dataset. The stunningly produced Terrestrial Impact Structures is a large-format atlas that maps all currently accepted ones, plus some likely candidates, and makes for an instant must-have reference work for any geology or astronomy library.

This atlas is, furthermore, a beautiful example of one field of scientific enquiry playing off another. The TanDEM-X in the subtitle refers to the German satellite mission that, during six years, collected the precise planetary-wide elevation data that is the bedrock of this atlas. To be clear, this book was obviously not the reason these satellites were put in orbit. But, once gathered, such data can have many uses and scientists can apply to get access to it, which is exactly what these three authors did.

Next to introducing the satellite mission and the principles behind radar remote sensing (specifically synthetic aperture radar interferometry), the six chapters in the 33-page introductory section provide very readable overviews of asteroid and comet formation, a blow-by-blow analysis of the first seconds and minutes following a typical hypervelocity impact, and the geological traces these leave. This last one is a  particularly important chapter. After all, how do you determine if a crater resulted from volcanism, tectonics, or an impact? Especially when you keep in mind that ancient craters are modified over time by erosion, sediment deposition, and tectonic deformation. The answer is that the forces unleashed by an impact are unlike any other geological process on our planet and modify rocks in a unique way, something known as shock metamorphism. Thus, features such as shatter cones, microscopic planar and feather fractures, and specific lithologies – impact breccias, impact melt rock, and (micro)tektites – are important diagnostic criteria.

The atlas forms the bulk of this book. Volume 1 covers Africa, North & Central America, and South America, while volume 2 deals with Asia, Australia, and Europe. It seems no impact structures have been located in Antarctica yet. The authors draw on the widely respected and accepted Earth Impact Database, hosted and maintained by the Planetary and Space Science Center at the University of New Brunswick in Canada. This contains 190 structures to which the authors add another 18 recent ones that are confirmed according to shock metamorphism criteria.

“[T]he descriptions are as revealing as the maps themselves. Many of these structures are either eroded beyond obvious recognition or were buried following impact.” 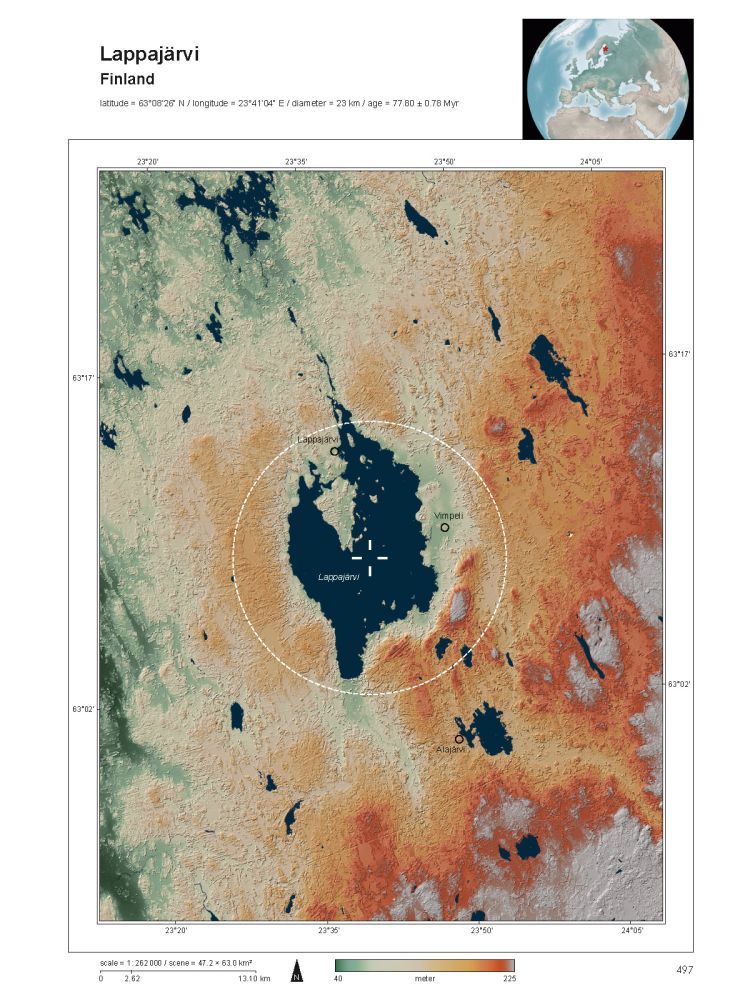 Each entry contains a full-page topographical map, coloured to show elevation, with a legend detailing longitude and latitude, the structure’s diameter, and the currently accepted age estimate. For craters that are clearly visible on the surface, additional satellite imagery is included, while for those that have been well researched the authors include geological maps or cross-sections (redrawn from earlier publications), field photos of characteristic rock outcrops, or photos of diagnostic rock samples showing traces of shock metamorphism.

Short fact sheets, written by either Kenkmann or Reimold, detail the geological setting of the impact location, the topology and age of the crater as far as known, and the history of its discovery. A short separate section gives tips on how to reach the location, ranging from “take exit so-and-so” to “requires permits / extensive expedition planning / a helicopter”. Finally, there is a list of selected references that are a goldmine in themselves, pointing to non-English publications, proceedings, and unpublished master’s theses. Mercifully, these are also compiled at the end of volume 2 in one large bibliography, together with a six-page glossary, lists of chemical elements and abbreviations, and two separate indices, one cartographic and one general. The geologic timescale is included at the end of each volume. This is thus a fully self-contained reference work. 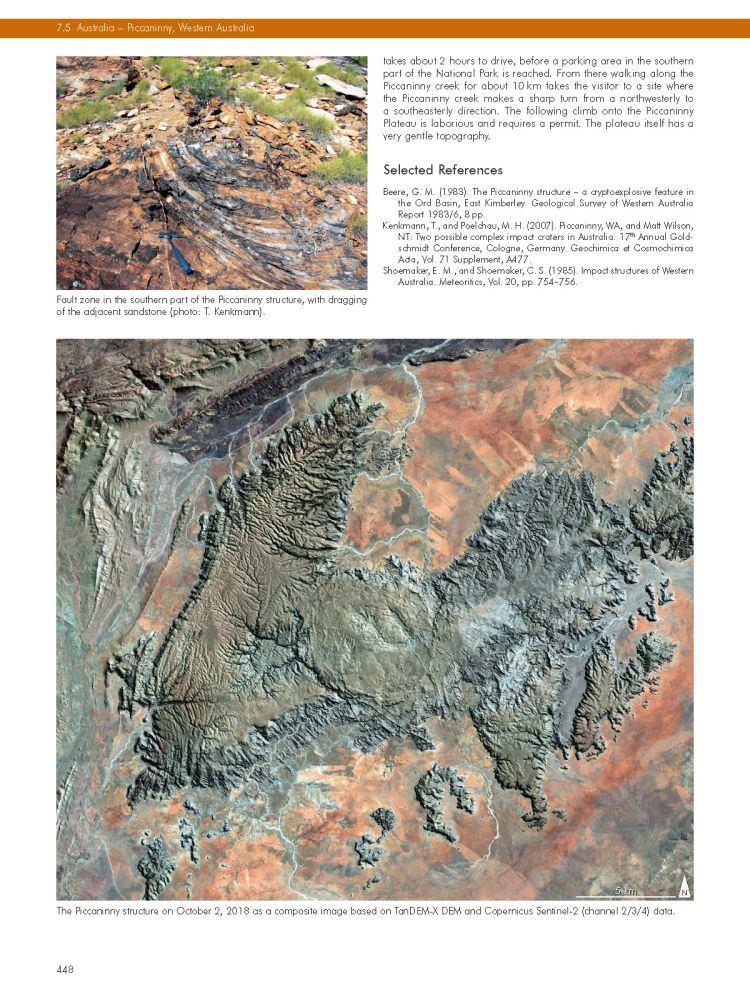 Next to famous impact structures such as Meteor Crater or Chicxulub, there are those treated in e.g. Springer’s Impact Studies series; Virginia’s Chesapeake Bay, Russia’s Puchezh-Katunki, or Norway’s awesomely named Mjølnir. But the majority will be little known outside the impact geology research community. This is where the descriptions are as revealing as the maps themselves. Many of these structures are either eroded beyond obvious recognition or were buried following impact, leaving no visible traces at the surface. Some were revealed when aerial surveys showed magnetic or gravitational anomalies, while others were discovered by companies prospecting for minerals or hydrocarbons. Further fascinating insights are the now obsolete history of explaining these structures in a uniformitarian framework as the result of cryptovolcanism or cryptoexplosions, rather than accepting catastrophist explanations. The authors are particularly mindful to highlight the rationale behind disagreements on age or size estimates. Their rigour also shows in their decision to relegate some structures, widely accepted in the community but still in need of further work to close the case, to a separate “further confirmation required” section at the end of each continent’s chapter.

“I am very pleased the authors worked with a publisher who cares about quality. [This] is a beautiful work consisting of two over-sized volumes produced by traditional offset printing” 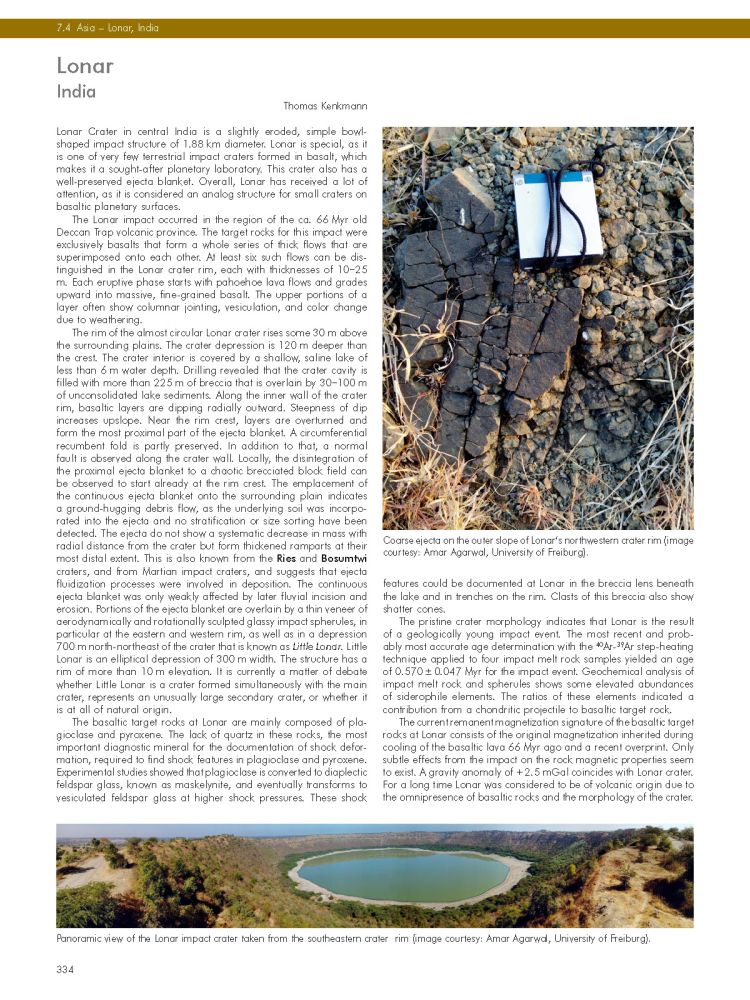 It would be tempting to call this work unprecedented, and it is certainly a step up from Paul Hodge’s 1994 Meteorite Craters and Impact Structures of the Earth that contained 139 entries. But there is one potential fly in the ointment: the publication last year by Springer of the Encyclopedic Atlas of Terrestrial Impact Craters that draws on the same Earth Impact Database. That atlas is based on the Italian COSMO-SkyMed mission, which also used synthetic aperture radar operating in the X-band. From what I can deduce, though, that mission did not rely on an interferometry setup with two satellites flying in tandem and did not yield elevational data.

Not having read it, I cannot speak for the quality of the scholarship of that book, though I can speak for the print quality. In my daytime job, I handle Springer books on an almost daily basis and, like the vast majority of their publications, this is a print-on-demand book. Their printing process is wholly unsatisfactory for visual books such as atlases, resulting in desaturated and grainy colour images (pretty much as if they were printed on your home inkjet printer). I am very pleased, therefore, that the authors of the book under review worked with a publisher who cares about quality. Terrestrial Impact Structures is a beautiful work consisting of two over-sized volumes measuring 24.5 × 32.6 cm in a very handsome slipcase, 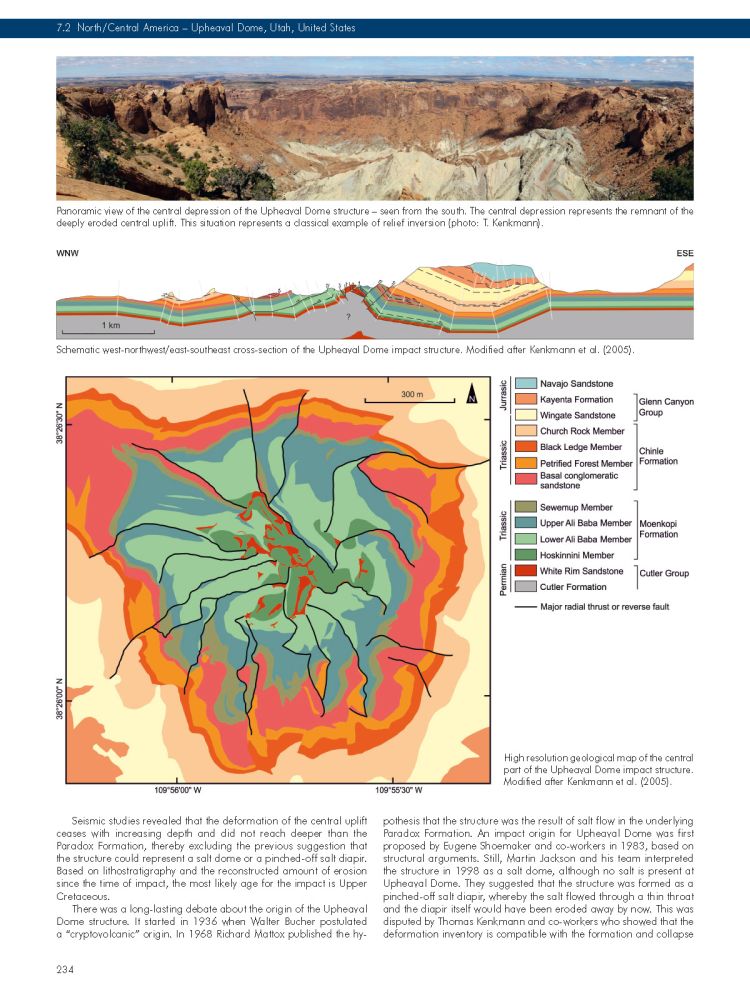 produced by traditional offset printing on thick, slightly glossy, high-quality paper stock. And all that at a lower price. In case you were in doubt which to choose, this, here, is the book to go for.

Terrestrial Impact Structures is a feast for the eyes that is a mandatory reference work for any professional or amateur geology or astronomy library. If you are on the fence, I will let you in on one last detail. The acknowledgements mention that the printing costs were in part covered by two of the authors. I might be proven wrong, but I have a suspicion that once this book sells out, it will not be reprinted and will quickly become highly sought after.

Dillow’s Fire in the Sky paperback

Hodge’s Meteorite Craters and Impact Structures of the Earth paperback