Are you the kind of person who reaches for screws and nails rather than glue when you need to stick two things together? So am I. And if I am to believe chemist Steven Abbott, that is not the only thing I am mistaken in. I was initially confused when I saw this book. Why is the Royal Society of Chemistry publishing a book about adhesion, surely that is all just physics? Actually, that is only partially true: this subject is chock-full of chemistry. An entertaining, opinionated, and well-written general introduction, Sticking Together turned out to be educational in more than one way. 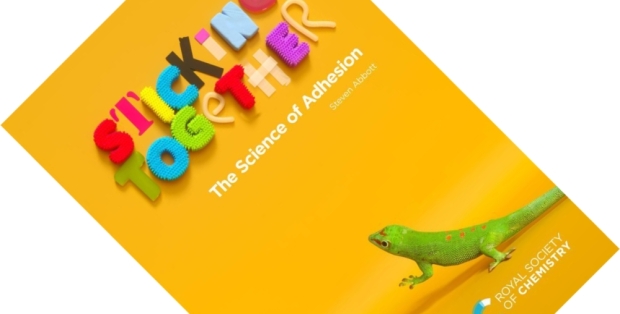 Sticking Together: The Science of Adhesion, written by Steven Abbott, published by the Royal Society of Chemistry in May 2020 (paperback, 278 pages)

At the heart of Abbott’s thinking lies the slogan “adhesion is a property of the system”. Since this is really core to the book, it is worth unpacking this straightaway. What it means is that there is much more to the subject of adhesion than just the adhesive, whether tape, glue or something else. Just as important are the properties of what you are sticking to, but also the kinds of forces and loads your bond will be exposed to, and the environmental conditions such as temperature and humidity under which you expect things to stick. A one-glue-fits-all solution is an impossibility: what works under some conditions is completely unsuitable for others. And this is where there are a lot of misunderstandings, giving adhesives an undeserved bad reputation.

After some much-needed technical basics – such as the important difference between peel, shear, and butt forces* – Sticking Together takes a surprisingly wide foray into tacky topics. Next to the usual suspects, a small but noteworthy selection of other things that stick together covered here include cement, aeroplanes, paint, 3D printed material, and, yes, even humans. And then there is the question of why some things do not stick. Not only will this book help you understand what adhesive is best for whatever job you have at hand, but it also clears up some urban legends, such as the idea that roughening a surface increases adhesion – it actually achieves the opposite.

“A one-glue-fits-all solution is an impossibility: what works under some conditions is completely unsuitable for others.”

To clarify his explanations, Abbott relies on diagrams to show e.g. the difference between entanglement and crosslinks, or brittle vs. flexible bonds (and why superglue is not the answer to everything). Besides the book, he has apps online where you can play with values put into formulas , as well as a series of YouTube videos. The latter are of a charming kind of ’90s home-video quality. And I do not write this to belittle them, it just drives home the point how spoiled we have become by the high-production-quality science-explainer videos available on YouTube nowadays. One thing I would have changed had I done the layout of the book would be to replace the YouTube play button symbols with QR-codes (leaving the URL in place for those without a smartphone).

Reading Sticking Together gave me a renewed appreciation of just how ubiquitous and important adhesion is in our lives, but there are two other aspects worth highlighting that made this book more than just an enjoyable pop-science chemistry book for me.

“One other aspect […] that made this book more than just an enjoyable pop-science chemistry book for me [is Abbott’s] outspoken pro-science and pro-chemistry attitude.”

First is Abbott’s frankness in admitting his ignorance. He has been wrong about certain topics in the past and writes freely of his mistaken ideas and what he learned from them in the end. Furthermore, in his role as a chemistry consultant, he is frequently called in to advice on problems where he only has outsider knowledge, with the other parties bringing in their own expertise. Examples include product manufacturers who are struggling to find the right adhesive for new packaging material. Abbott enthusiastically writes of the resulting meeting of minds and the unexpected and exciting new ideas that often emerge.

The other is his outspoken pro-science and pro-chemistry attitude. More than once he wearily tells of chemical scare stories that broke in the media, resulting in yet another useful chemical compound having to be abandoned in the face of unreasonable public sentiment, when the real risks are negligible. And he similarly takes issue with the appeal-to-nature fallacy, pointing out how “natural” is not always better. Though a clever marketing ploy, many so-called green solutions are more harmful and costly to the environment once a full life-cycle analysis is done. The chapter on paints even concludes with a spot-on admonishment that the assumption “industry bad, consumers good” frequently has got it backwards. Industry experts work very hard to develop safe and reliable products. It is consumers who insist on buying cheap, inferior products that ultimately cost the planet more.

Overall, Abbott reminds me of the enthusiastic high school teacher too few of us had. Luckily, it is never too late to make up for such missed opportunities. For a more technical take on the subject, readers can turn to Abbott’s book Adhesion Science, but those seeking a gentle introduction would do well to stick (sorry) to this book. Readers might also be interested in Bloomsbury’s Sticky that was published a year later.

* Also known as whole sample vertical pull, basically the brute-force pulling many of us will initially resort to when things refuse to come undone.

Donations
Follow The Inquisitive Biologist on WordPress.com
Join 1,395 other followers