On the Prowl: In Search of Big Cat Origins, written by Mark Hallett and John M. Harris, published by Columbia University Press in June 2020 (hardback, 259 pages)

Before I even get to the contents of the book I simply have to first highlight the artwork. On the Prowl is authored by naturalist and scientific artist Mark Hallett and geologist and emeritus curator John M. Harris, with Hallett additionally providing artwork. And these are not mere pretty decorations.

Oh my, where do I even begin?

This is the rare category of tastefully executed scientific illustrations: anatomical drawings, behavioural sequences, phylogenetic trees, maps, reconstructions of life appearance, and beautiful full-bleed (i.e. printed edge to edge) pictures opening each chapter. Every drawing, full of detail, has been carefully crafted, has a function in the book, and has been drawn in the same tasteful pencil-sketch style. Jaw-dropping? Gob-smacking? You pick your favourite superlative – I was floored when I first opened this book. Basically, do not browse through this if you were planning not to buy more books this month, because it will be very hard to put it back down.

But what of the actual writing? On the Prowl spends five chapters tracing the outline of big cat evolution during the last 23 million years. The last three chapters deal, notably, with recent declines and extinctions, and current conservation concerns. The focus here is on the pantherines or subfamily Pantherinae; the lions, tigers, jaguars, leopards, and snow leopards. Not discussed in as much detail and acting more as supporting cast are the Felinae (pumas, cheetahs, and smaller genera such as lynxes, ocelots, clouded leopards etc.) and the various sabertoothed cats. Seeing the number of books already dealing with these (Anton’s Sabertooth and the two edited collections from Johns Hopkins University Press) it is easy to agree with their decision not to focus any further on sabertooths here.

The story of pantherine evolution is far from fully resolved, and this part of the book required close attention and occasional rereading. The various lineages and subspecies, notable fossil finds, and competing hypotheses all make for a rather complicated story full of details. I should add that I am not faulting Hallett and Harris’s writing, as they do an admirable job distilling a lot of technical literature into a very readable book. It is simply that, much as we might like a good narrative, reality is often unruly and does not yield to a clean, neat story. Biology is messy like that. But what a story it nevertheless is! 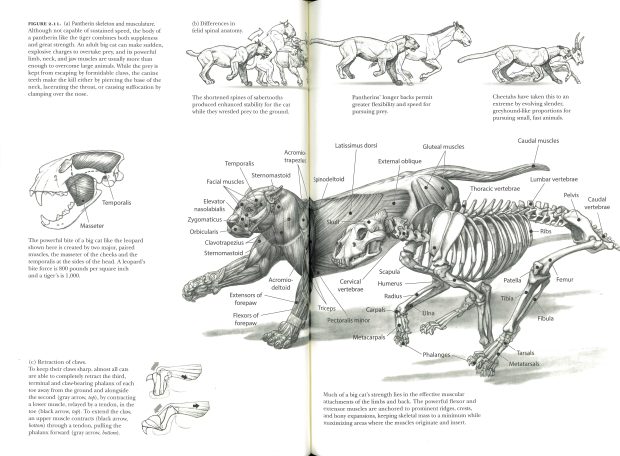 An introductory overview gets you up to speed on early carnivore and carnivoran evolution and explains the difference between the two. The first cat-like species you then meet is the genus Proailurus, which (likely) evolved into Pseudalaerus, the potential ancestor to all the big cats and the “true” sabertooth cats (the machairodontines, which includes the famous Smilodon). At the time, these faced stiff competition from the so-called “false” sabertooth cats, the nimravids and barbourofelids.

Personal revelation number one: I was ignorant of the fact that not all sabertooths are closely related (had I actually read Mauricio Anton’s Sabertooth, I would know all this). The family Nimravidae arose very early, some 50 million years ago, and is technically merely a cat-like carnivore. The subfamily Machairodontinae split off from the cat family Felidae some 16 million years ago and is technically a true cat. Despite this taxonomical distance, they came to closely resemble each other. (Whoever said that what looks like a duck and quacks like a duck, probably is a duck never heard of convergent evolution…).

“it is starting to look that the Tibetan Plateau was ground zero for the pantherines from which both the snow leopard–tiger and the jaguar–lion–leopard lineages dispersed globally.”

What probably gave the Felidae the competitive edge was changes in climate and, with it, vegetation: closed forests gave way to open woodlands and savannas. Chapter 2 describes in marvellously illustrated detail the anatomical and behavioural adaptations of the pantherines that made them such formidable hunters in these open habitats and helped them claw their way to the top. This placement of big cat evolution in the context of their ecosystems and their relationship to other animals is a recurring and very welcome theme in this book. The earliest known pantherine we then meet is Panthera blytheae, a possible ancestor of the modern snow leopard, which brings me to…

Personal revelation number two: it is starting to look that the Tibetan Plateau was ground zero for the pantherines from which both the snow leopard–tiger and the jaguar–lion–leopard lineages dispersed globally. Two appendices give an illustrated overview of felids in geologic time and pantherin dispersal across the world. These are useful, but, like executive summaries, are very condensed. I would have loved a few more detailed illustrations of the various timelines over which this happened, breaking out the individual lineages.

Now, connoisseurs might have immediately perked up their ears when hearing of this book. How does it compare to the 1997 book The Big Cats and their Fossil Relatives? This was, incidentally, also published by Columbia University Press, and similarly combined beautiful artwork with accessible text. It is one of the first things the authors tackle, writing that it focused more on the true felid and the nimravid cats, and comparing the books indeed confirms this. I can see two reasons why owners of the 1997 book want to pick up this one as well. One is that it fills you in on the intervening 23 years of scientific research, especially that coming out of the Asian palaeontology community. Panthera blytheae was only discovered in 2010, and pinpointing the Tibetan Plateau as the centre of pantherine radiation strikes me as a significant advance in our understanding. Two, On the Prowl spends a substantial chunk dealing with both recent extinctions and conservation concerns, something that the previous book mentioned only briefly at the end.

“Having told the story of big cat evolution, it would have been an oversight to turn a blind eye to the massive losses caused by human greed and cruelty.” 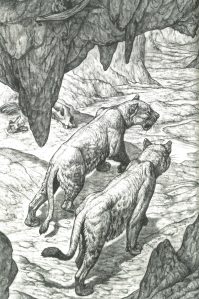 Having told the story of big cat evolution, it would have been an oversight to turn a blind eye to the massive losses caused by human greed and cruelty. Thus, these chapters and their no-punches-pulled tone are fully justified. One chapter focuses on the early decline following the last ice age, in particular discussing the decline of the steppe lion (of the four discussed extinction scenarios, only one involves humans). I was somewhat surprised to see only minimal mention of Paul Martin’s overkill hypothesis when drawing a comparison to the fate of the American lion, Panthera atrox, and no mention at all of End of the Megafauna that critically discussed it. A second chapter picks up the story of extinction with the slaughter of big cats in Roman amphitheatres and habitat destruction ever since agriculture took off some ten thousand years ago. It also prominently mentions the huge impact of trophy hunting by western colonialists in Africa and Asia. The last chapter highlights the ongoing threats of poaching and wildlife trafficking (particularly slamming tiger farms in China and the canned lion hunting industry in Africa), human-wildlife conflict between carnivores and cattle herders, the shortcomings of national parks, and reasonable and critical consideration of future options such as captive breeding, rewilding, and de-extinction.

Overall, On the Prowl provides a superb overview of the complex and rich story of big cat evolution, while being an outstanding showcase of how beautiful artwork can support science communication. I have no hesitation to recommend this book as one of 2020’s must-buy palaeontology books.

On the Prowl hardback

Antón & Howell’s The Big Cats and their Fossil Relatives paperback

Martin’s Twilight of the Mammoths paperback

MacPhee’s End of the Megafauna hardback

Mills’s Blood of the Tiger paperback

Peirce’s Cuddle Me, Kill Me paperback

Wray’s Rise of the Necrofauna paperback