When we think of animal navigation, the dramatic comes to mind: globe-trotting birds, migrating monarch butterflies, and ocean-crossing whales. But on a smaller scale, navigation is no less vital and no less interesting. Take the humble desert ant. Desert Navigator is the culmination of a lifetime worth of study by German zoologist Rüdiger Wehner and his many collaborators. It is an astonishing and lavishly produced book that distils half a century of experiments into a richly illustrated narrative.

Unless you live in a desert environment, chances are that you have never seen a desert ant. Speedy silver bullets that dart across the sand on long legs, ants of the genus Cataglyphis (cataglyphs to you and me) live in the deserts of North Africa, the Middle East, Europe, and Asia. In a beautiful example of parallel evolution, the deserts of Southern Africa are host to the genus Ocymyrmex, while the Australian outback is home to Melophorus ants. Wehner calls them little thermal warriors, as they stand out for their thermophile (heat-loving) behaviour. When pretty much every other living creature tries to find shade, these ants come out at the hottest part of the day to forage in murderous temperatures, tolerating surface values of 57-63°C.

How do they survive such extremes? Wehner appropriately opens the book with an introduction to the biology of desert ants. Here, he details their morphology and behaviour, highlighting how they cope with the heat through for example a thermal shield of silvery hairs that covers parts of their body, clever use of small-scale temperature variations just above ground level, and careful prevention of dehydration. Speed is of the essence to get the most out of their foraging trips, so Wehner examines their locomotion and long-leggedness.

Navigation, however, is at the core of this book. Given that their nest opening is but a small hole in the ground and there is a high price to pay for getting lost, how do these ants navigate such barren and featureless environments? How do they, without fail, find the shortest way home after having wandered about in search of food?

“When pretty much every other living creature tries to find shade, these ants come out at the hottest part of the day to forage in murderous temperatures, tolerating surface values of 57-63°C”

To answer these questions, the book takes a tour through five decades of experimental work, regularly venturing into research on related insect groups and covering a large body of older research published in German. What stands out is just how far you can take various lines of inquiry in that amount of time. Desert Navigator is not a difficult book to read, but it is information-dense. Every section, sometimes every paragraph, summarises a different study. To avoid vague or hasty conclusions, Wehner stresses the importance of careful experimental design and the field biologist in me delighted in the many unusual contraptions and clever solutions to answering questions. In what follows, I can only cover some examples of particularly memorable findings.

Tiny as they are, Wehner shows these cataglyphs to be miracle insects. This starts with the diversity of environmental cues they use to find their way: polarized light* (something humans cannot perceive, but many animals can), gradients in both the intensity and spectrum of light that indicate the azimuth or compass bearing of the sun, the earth’s magnetic field, even wind direction. Just as humans focus images on a tiny pit in their retina called the fovea, the compound eyes of insects have specialised areas too. Blocking different parts of ant eyes has revealed how the dorsal rim area (found towards the top) is both necessary and sufficient to observe polarized light. And we can even trace how this is processed in the brain. Ant brains are incredibly tiny, but certain neurological architecture and pathways are conserved across the family tree of arthropods, so work on the larger crickets and locusts has been enlightening.

Finding your way home involves having a sense of distances. Ants employ an internal step counter and measure optic flow, the speed with which your environment moves past your eyes as you move. This has involved ingenious experiments lengthening (with stilts) or shortening (poor buggers) ants’ legs, or manipulating optic flow using striped conveyor belts, resulting in ants overshooting or undershooting their nest when returning. Why do ants use both? Wehner argues the latter could be an evolutionary hangover as ants are related to flying hymenopterans that use optic flow rather than a step counter to estimate distances.

“To avoid vague or hasty conclusions, Wehner stresses the importance of careful experimental design and the field biologist in me delighted in the many unusual contraptions and clever solutions to answering questions.”

Combining distance and direction is known as path integration or dead reckoning. Picking apart this process has involved allowing ants to walk to a feeder and then catching and releasing them elsewhere. They will walk back the right distance in the right direction to where their nest should be. Further work with ants walking part of their route through tunnels showed that only steps taken under an open sky count when calculating the return route though. But ant navigation also incorporates visual landmarks (most likely the general appearance of an ant’s panoramic view), and olfactory cues (the smell of the nest in particular). Young ants have been shown to go on learning walks and do visual scanning maneuvres to observe their nest from various angles. Here, too, further work has tried to link this to brain regions, with the so-called mushroom bodies being likely candidates for the long-term storage of landmark information.

Researchers have even started probing how these systems come together and interact. Presenting ants with conflicting information by moving familiar landmarks leads to compromise trajectories between what path integration and landmark views tell them, while further work shows landmark recognition to become more important closer to the nest. Ants will even employ error correction strategies by purposefully undershooting their target or navigating downwind of nest odour plumes.

Mammals seem to build a mental map of their surroundings, but insects? While some have claimed bees do, Wehner and others contest this, arguing that combining several routines is sufficient for successful navigation. As he puts it succinctly, ants know where to go without necessarily knowing where they are.

“Mammals seem to build a mental map of their surroundings, but insects? [Wehner argues that] ants know where to go without necessarily knowing where they are.” 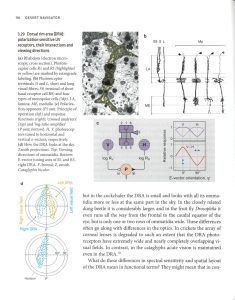 A highlight of this book are the full-colour illustrations. Text and images complement each other perfectly: you need one to understand the other. No fewer than three graphic designers are credited in the acknowledgements, hinting at the staggering amount of work involved. The vast majority of illustrations have been redrawn from roughly 100 different scientific publications, covering five decades. This will have included everything from hand-drawn illustrations in the early days to those produced with graphic software recently. Had these been reproduced as is, which happens, the mixture of visual styles would have been jarring. Now, the book is presented in such a smooth, uniform style that it almost goes unnoticed, so this is a point of praise worth reiterating.

After Wilson’s and Hölldobler’s book The Ants in 1990 and Tschinkel’s The Fire Ants in 2006 (and with Army Ants also published in 2020), this title joins what is becoming an illustrious line-up of in-depth books on ants published by Harvard University Press. I praise them unreservedly for the lavish production values they have heaped upon it. Desert Navigator is a myrmecological masterpiece and a fitting milestone in Wehner’s long and successful research career. If you have any interest in ants, insect behaviour, or animal navigation you absolutely do not want to skip this astonishing book.

*Since we cannot perceive polarized light, a short explanation is called for. When emitted by the sun, travelling light waves can oscillate up and down, or side to side, or really any angle in between. When light enters the atmosphere and water bodies, it scatters. Air and water molecules filter out waves with certain oscillation directions, leaving only waves oscillating in other directions. The result is called polarized light.