The deep past harbours many events, epochs, and places that are still a mystery to me. Case in point: once upon a time, North America was cut in half by an enormous ocean. Something I was only dimly aware of. Luckily, Indiana University Press’s flagship palaeontology series Life of the Past has just the book to remedy that. I may be three years late to the party, but this 2017 book provides all the details one could ask for, and then some.

The title of this book is possibly why I initially overlooked it. The Western Interior Sea bisected North America from the Gulf of Mexico to the Arctic, covering far more than the state of Kansas. But since the author Michael J. Everhart (the Adjunct Curator of Paleontology at the Sternberg Museum of Natural History in Hays, Kansas) has spent his professional career in Kansas, and the pickings here are particularly good, Oceans of Kansas it is. It was one of many ancient oceans: bodies of water that no longer exist due to plate tectonics, changes in sea-level, or both (see my review of Earth History and Palaeogeography). Where, for instance, the Tethys Ocean closed over time, land uplift and retreating water left the Western Interior Sea high and dry but very much in place. This is why you can find fossils of ancient fish, turtles, and marine reptiles in what are now the Great Plains of North 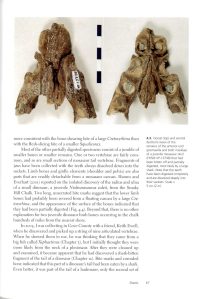 The first two chapters introduce the location and the history of the discovery of this inland sea. Although the book takes regular excursions, the focus is squarely on the Cretaceous rock record in Kansas, spanning about 30 million years, and within that specifically on the Smoky Hill Chalk. This was deposited when microscopic shelled creatures lived and died over some 5 million years, blanketing the bottom of the Western Interior Sea with marine sediment that turned into chalk. It is this particular layer that offers a unique window into life between 87 to 82 million years ago.

“[…] land uplift and retreating water left the Western Interior Sea high and dry but very much in place. This is why you can find fossils of ancient fish, turtles, and marine reptiles in what are now the Great Plains of North America.”

The bulk of the book systematically details all the relevant taxonomic groups. It was a world where the sea bottom was blanketed with inoceramid clams while overhead the large marine fauna took centre stage. There were sharks in many sizes, including terrifyingly large Ginsu sharks (genus Cretoxyrhina) that left scratches and bite marks on, and sometimes even teeth embedded in, the bones of numerous other animals. But also unusual shell-crushing sharks (genus Ptychodus) with knobbly, dome-shaped teeth. There were numerous fish, including the enormous 5.5 m Xiphactinus, fanged fish (genus Enchodus), and Saurodontid fish with a sword-shaped lower jaw. Turtles shared the waters with a riot of other large marine reptiles: the plesiosaurs, divided into the long-necked elasmosaurids and the short-necked pliosaurids, and the massive mosasaurs, the top predators of this realm. Especially that last group is well portrayed here, providing a welcome update to the now fairly dated 1997 book Ancient Marine Reptiles and the 2005 book Sea Dragons. There is enough fossil material here for Everhart to include a well-informed natural history section, while the colour plates by the late Dan Varner provide some welcome eye candy.

For other groups, the information is scanter. Ammonites and related cephalopods must have populated these waters, but fossilised remains are few as their aragonite shells readily dissolved. There are the occasional remains of pteranodons, although these flying reptiles probably did not fly hundreds of miles to the middle of the Western Interior Sea to forage here. Everhart conjectures these were the victims during long-distance migrations. There were toothed seabirds of the genera Hesperornis and Ichthyornis, two branches of the bird family tree that are now extinct. And there are rare dinosaur remains. How they got there? The clue is in the title of a wonderful 2012 paper: Float, explode or sink: postmortem fate of lung-breathing marine vertebrates – these are the remains of carcasses washed out to sea.

“terrifyingly large Ginsu sharks […] left scratches and bite marks on, and sometimes even teeth embedded in, the bones of numerous other animals”

This brief natural history sketch is gleaned from fossils, and they are the focus of this book. Everhart provides museum accession numbers and exacting details on what animal parts were found when and where, who dug them up, who described them, and how taxonomic redescriptions means fossil specimens have sometimes been known by three or four different names since their discovery. 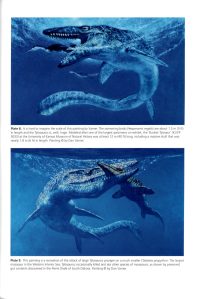 Take for example the mosasaur species currently known as Tylosaurus kansaensis. The type specimen (FHSM VP-2295) was originally collected in 1968 and identified as “Clidastes or Tylosaurus” when it was exhibited at the Sternberg Museum of Natural History in Kansas. Over the ensuing decades it was renamed Platecarpus, then T. nepaeolicus, then downgraded to the generic Tylosaurus n. sp. (short for new species). When the author and his colleagues examined the specimen in 1990, they agreed it was something else after all and named it T. kansaensis in 2005. This paper was criticised, claiming that T. kansaensis could not be separated from T. nepaeolicus and was a juvenile form of it. Everhart disagrees and that is where this particular matter rests for now. It makes me wonder: is there a central database to keep track of all these name changes?

Thus, Oceans of Kansas is not a very difficult or overtly technical book, but it is highly detailed. These kinds of minutiae are probably of limited interest to the general reader, but they are the hard currency of aspiring and practising palaeontologists. I always like to clarify that this remark is not intended as a criticism but as an observation of the level a book is pitched at – good to know going in. That said, it is not a dry read and Everhart livens it up by opening each chapter with a fictionalised account of “a day in the life of…”, and tells of curious historical incidents, backstories to remarkable fossils, and his personal experiences collecting in the field.

“Oceans of Kansas is […] highly detailed. These kinds of minutiae are probably of limited interest to the general reader, but they are the hard currency of aspiring and practising palaeontologists. “

Two things, in particular, emerged while reading Oceans of Kansas. First is a revealing look into the history of palaeontology. Not surprisingly, the infamous rivalry between O.C. Marsh and E.D. Cope features here. But others are equally important to the story of the Western Interior Sea: Joseph Leidy, Benjamin F. Mudge, Samuel W. Williston, and the Sternberg family. One thing that bedevils research to this day is the lack of stratigraphical data for older specimens, something that was not considered particularly important at the time! It was not until 1982 that E.D. Hattin produced an accurate chronostratigraphy based on numerous thin layers of residual volcanic ash deposits found in the Smoky Hill Chalk. This has allowed more precise dating of fossils.

Second is what this book reveals about palaeontology as a discipline. I already mentioned the confusing tangle of taxonomic name changes. Then there is the large amount of undescribed material lingering in museum collections. Everhart repeatedly writes, rather casually, how specimens collected sometimes a century ago are only now studied and described (I called this the dirty secret of natural history museums in my review of The Lost Species). The book also made me appreciate again just how fragmentary and haphazard the material is with which palaeontologists work. Much of the seafloor of the Western Interior Sea was exposed to erosion millions of years ago already, and thus no longer exists. So much information has been lost to time that it is a miracle that Everhart and his many colleagues have been able to reveal this much through their diligent work.

“The book made me appreciate again just how fragmentary and haphazard the material is with which palaeontologists work. […] it is a miracle that Everhart and his many colleagues have been able to reveal this much.”

Two final observations. The first thing you will notice when picking up this book is its sheer weight: the large trim size and thick paper stock make this book a lot heavier than you would expect for 400 pages. But this has been put to good use as the book is liberally illustrated with about 220 photos and drawings. Some weight could have been saved at the end of the book as references are given separately for each chapter, duplicating many of them. The second thing to note is that the first edition of Oceans of Kansas was published in 2005. I have not read it, but in the current preface, Everhart explains with some satisfaction how this second edition allowed him to finish what he started. Next to the obvious updates and new findings in the intervening twelve years, the first edition left out material that he wanted to include, but could not due to deadlines and publication schedules. This is a valuable update.

Like other site-specific books in the Life of the Past series (e.g. Mesozoic Sea Dragons, Dinosaurs of Darkness, and Jurassic West) Oceans of Kansas synthesizes a huge amount of information and is the definitive reference work to this time and place. It is thanks to scientists such as Everhart who dedicate their career to the exacting study of localised fossil-rich sites that we can a get glimpse into deep history.

Prothero’s The Story of the Dinosaurs in 25 Discoveries hardback