Some books, it seems, sit on your shelf just waiting for the right moment. David Quammen’s Spillover may have been published back in 2012, but it eerily foreshadows the 2019-20 coronavirus pandemic that currently keeps the world in its grip, and provides many insights. Right now, most people are of course concerned with the direct impact on public health and their jobs. While we try to slow down the spread of this disease, the global economy is taking a nosedive as country after country goes into lockdown. Once we come out on the other side though, there will be deeper questions to be asked. Could this happen again? How do we prevent that? And what the actual fuck just happened? Let Quammen be your guide, for, as he will show, everything comes from somewhere… 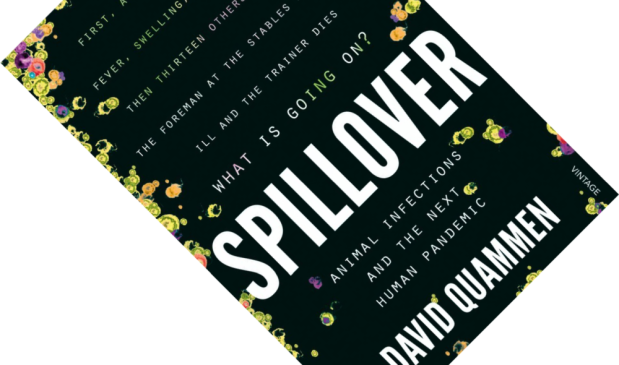 Spillover: Animal Infections and the Next Human Pandemic, written by David Quammen, published by Vintage in August 2013 (paperback, 592 pages)

Quammen likes to write big, chunky books. Spillover tops out at 587 pages. But do not let this put you off, for he is a master at writing a suspenseful narrative and has chopped up the book in 115 short chapters that irresistibly flow into each other.

He kicks off with the pandemic that wasn’t. You can be excused for never having heard of Hendra. First recognized in Brisbane, Australia, in 1994, it killed a dozen horses and one man. After months of research, it was traced back to bats. This crossing of species boundaries by infectious diseases is at the heart of Spillover and is a phenomenon known as zoonosis (professionals will want to refer to Zoonoses).

Zoonosis leads on to the second important concept in this book: reservoir hosts. The reason viral diseases such as polio and smallpox no longer plague us is that they only occur in humans. With nowhere else to hide, they can be eradicated by sustained vaccination campaigns. Zoonoses, in Quammen’s words, are more like guerilla fighters. They strike unexpectedly and disappear again, sometimes for years, while living on in other organisms where they cause little harm. Tracking down these reservoir hosts requires intrepid individuals willing to leave the confines of their laboratory. Several such virus hunters have written about their adventures.

“[…] the second important concept in this book: reservoir hosts. […] Zoonoses are more like guerilla fighters. They strike unexpectedly and disappear again, sometimes for years. But where do they go?”

Quammen spares no effort and accompanies many such scientists in the field, specifically to learn more about Ebola. The bloody details of this disease have been slightly exaggerated in the (in)famous book The Hot Zone (Quammen provides a healthy corrective). But it still is a horrific disease that stalks Africa, periodically popping up in humans but also killing many gorillas. The hunt for its reservoir host continues, although bats are a likely candidate. Quammen’s vivid and personal descriptions of the fieldwork, the extraordinary working conditions, and the chance scientific breakthroughs are what make Spillover such a pleasant mix of popular science and reportage. It is worth noting that at the beginning of the 2014 Ebola outbreak, a part of Spillover was updated and republished. It was a bit premature in hindsight, as that outbreak lasted until 2016.

Of course, a large part of virological research plays out in the lab, and Quammen shows himself equally at home here. The long chapter on AIDS and HIV is a perfect example, describing the decades-long research effort that has pushed the emergence of this disease back in time, all the way to the start of the 20th century. At the same time, the family tree of HIV has exploded “like an infectious starburst”, and Quammen skillfully guides the reader down the warren of HIV-1 and HIV-2, the different groups within these, and, nested within those, the many subtypes. Oh, and of course the numerous variants of the closely related simian immunodeficiency virus, or SIV, found in apes and monkeys. He relies on interviews and close reading of publications to reconstruct the tumultuous and twisting history of scientific breakthroughs and blind alleys.

Quammen also shines when it comes to memorable metaphors and masterful distillation of technical details. All of this is helped by crisp writing, short and straightforward sentences, and the repeating of salient points. He knows the details are complicated, yet he enlightens you in a conversational tone without ever being condescending. He is equally at ease giving you a potted history of the important epidemiological parameter R0, as he is highlighting the unique character of retroviruses such as HIV. The former is the basic reproduction number that you will have seen in the news lately.

“There is some eerie foreshadowing when Quammen asks: “Will the Next Big One come out of a rainforest or a market in southern China?” […] once we get out on the other side, there will be some uncomfortable and probing questions to be asked.”

Particularly relevant now is the distinction between DNA and RNA viruses, coronaviruses belonging to the latter. As highlighted in my review of Viruses, single-stranded RNA lacks the error-correction mechanisms of DNA and is thus much more prone to mutation and rapid evolution. Quammen throws three metaphors at you to emphasize this point before repeating it: “RNA viruses mutate profligately“.

A host of other, lesser-known diseases fills these pages: herpes-B, Nipah, Marburg, bacterial zoonoses such as Lyme disease, psittacosis, and Q-fever. Even a surprise zoonotic strain of malaria. After all, most strains of malaria are vector-borne diseases, mosquitoes being their vector. They are incredibly deadly, but they are not zoonoses.

All of these have fascinating backstories. But one point jumped out at me in particular: bats. Bats are, or are suspected to be, the reservoir hosts of many zoonoses. Why? Quammen highlights some of the unique aspects of their biology that might contribute to this: there are many species (a little-known fact is that about 20% of mammal species are bats!), they roost and hibernate at extremely high densities, and they fly. For more, see Bats and Viruses, Bats and Human Health, and the practical FAO manual Investigating the Role of Bats in Emerging Zoonoses.

“Many will have been left bewildered by the abrupt arrival of the current coronavirus pandemic. To better understand the world that has just gate-crashed ours, Spillover is (still) a magnificent piece of science reporting”

Viruses are everywhere: some speak of the virosphere rather than the biosphere, while Carl Zimmer calls ours a planet of viruses. Of the Ebola virus, Quammen writes that it “is not in your habitat. You are in its.” And the virosphere is a Pandora’s box that we have ripped wide open through our actions. A recurrent and important message in Spillover is how habitat fragmentation and destruction exposes us to a menagerie of new viruses as wild animals are forced to live and die in our midst.

Particularly fertile breeding grounds for zoonoses are the bushmeat trade and the so-called wet markets in Asia where a wide range of poached animals are traded and slaughtered. Nuwer’s Poached highlighted the exotic tastes and conspicuous consumption by wealthy diners as one of several driving forces behind the demand for wild meat. These markets were ground zero for the SARS outbreak in 2002-03, and likely too for the current coronavirus pandemic. There is some eerie foreshadowing here when Quammen asks: “Will the Next Big One come out of a rainforest or a market in southern China?” As I said at the beginning, once we get out on the other side, there will be some uncomfortable and probing questions to be asked.

COVID-19 is only the latest in a long line of zoonotic diseases, and will certainly not be the last. But rather than wanting to make you more worried, Quammen wants to make you more smart. Many will have been left bewildered by the abrupt arrival of the current coronavirus pandemic. To better understand the world that has just gate-crashed ours, Spillover is (still) a magnificent piece of science reporting that weds exceptional clarity to spell-binding storytelling.

Piot’s No Time to Lose paperback

Pepin’s The Origins of AIDS paperback

Kucharski’s The Rules of Contagion hardback

Holmes’s The Evolution and Emergence of RNA Viruses paperback