In a book that is the perfect example of a British understatement, bioscience graduate Caleb Compton presents a collection of 100 animals that are, indeed, rather strange. Based on his wildly successful Twitter feed @StrangeAnimals (62k followers as I write this), A Book of Rather Strange Animals goes just that little bit beyond the feed. And, to his credit, this is a selection of some truly unusual critters, some even I had never heard of before.

A Book of Rather Strange Animals: Highlighting the Wonders of Evolution and the Extraordinary Diversity of Life, written by Caleb Compton, published by Austin Macauley Publishers in January 2019 (paperback, 136 pages)

I will admit, the first thing that went through my head when I got this book was: “Please, not the platypus again…”. I mean, platypuses *are* strange, but they have become the cliché poster child for weird animals. Instead, Compton has selected animals that will be truly novel to most people.

Some of these have graced the pages of this blog before. There is the nearly extinct small cetacean called the vaquita, the heavily-poached pangolin, and the always popular mantis shrimp, now well-known for packing an incredibly powerful punch with its claws. Some I just happen to know because specialist books have been written on them, notably the tuatara.

“My first thought was: “Please, not the platypus again…” […] Instead, Compton has selected animals that will be truly novel to most people.”

Many others would have remained obscure if it was not for a certain elderly naturalist introducing them to audiences around the globe in recent BBC wildlife documentaries. Think of the marine iguana that lives in the Galápagos or the nightmarish bobbit worm that terrified TV viewers (David, think of the children!) And some made headlines in popular media in recent years. For example the saiga antelope, whose population crash was profiled by Ed Yong for The Atlantic, or the widely featured Greenland shark and its amazing lifespan of an estimated 400-500 years, that I read about in New Scientist. Even so, this book contained obscure gems that I had never heard of. The trilobite beetle? The sea bunny? The red-lipped batfish? Seeing is believing…

Compton’s approach is pretty straightforward and formulaic. Each animal receives a photo or illustration and a short, two-paragraph write-up, providing some details about its vital statistics, morphology, behaviour, reproduction and other notable biological aspects. This obviously does not leave as much space for information as comparable titles provide (see e.g. Consider the Platypus or Zombie Tits, Astronaut Fish and Other Weird Animals) but there were some delightful tidbits of information in here. I had no idea that stalk-eyed flies hatch with flattened eyestalks that need to be inflated quickly before their exoskeleton hardens. Or that the barreleye fish can rotate its eyes in its transparent head, depending on where it needs to look.

“Many [of these] would have remained obscure if it was not for a certain elderly naturalist introducing them to audiences around the globe in recent BBC wildlife documentaries.”

A particular aspect that Compton pays attention to in each entry is the animal’s conservation status. For many, hunting, poaching, climate change, habitat destruction, or combinations of these have driven them to the edge of extinction. This is part of the reason why this book was written: people do not care for, let alone try to protect, that which they do not know existed. And even then it can be an uphill struggle.

What lets the book down a bit, in my opinion, is its presentation. Animals seem to be presented in no particular order (not alphabetical, taxonomical, or thematical), and without an index, you only have the table of contents to find them by. Although a list of references is included, it is not very user-friendly, as none are referred to in the text. Since this is not an academic book, not littering the text with citations is an understandable decision, but a short “further reading” section listing two or three references at the end of each entry would have been welcome. Also, formatting the reference list as fully justified text (i.e. text flush with both left and right margins) just does not work here. More serious is that none of the illustrations is credited (which Compton does do on his Twitter feed). They obviously came from somewhere (the Shutterstock watermark still visible on the photo of the New Caledonian giant gecko reveals as much), so image credits or a list of attributions at the end should have been included.

“[…] part of the reason why this book was written [is that] people do not care for, let alone try to protect, that which they do not know existed.” 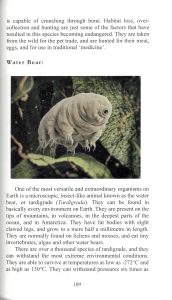 Now, I will admit that having studied biology for ten years and worked for a specialist natural history bookstore for the last eight, I suffer not a little bit from professional deformation. Spending most of my time reading popular and academic books and the science sections of popular media outlets means that I constantly immerse myself in the latest findings in biology and other sciences. But guess what, Mr Inquisitive Biologist, most people do not. So if I appear a bit snooty or jaded, I beg your pardon.

The ongoing biodiversity crisis desperately needs more people to care. And I think it is undeniable that popular science books that keep it brief and stimulate people’s curiosity potentially have enormous audiences. I fervently hope that they will serve as a gateway drug into a life-long fascination with biology and other scientific disciplines. As such, this fact-driven celebration of life’s bewildering diversity is a neat little book for the curious child or adult in your life.

A Book of Rather Strange Animals paperback