This book is dangerous. While reading it I missed metro stops, phone calls, and sleep. I also laughed. A lot. Webcomic creator and former NASA engineer Randall Munroe returns to book form for another instalment of zany humour and absurd ideas, this time providing absurd solutions to achieving everyday tasks and solving real-world problems. From fording a river by boiling it dry using a field of 300 million electric kettles, to using a swarm of butterflies to send large data files: the solutions are purposefully ludicrous. Nevertheless, this book falls back on logical principles, giving readers both a good laugh and a gentle introduction to science, engineering, and technology.

How To: Absurd Scientific Advice for Common Real-World Problems, written by Randall Munroe, published in the UK by John Murray in September 2019 (hardback, 280 pages)

It is easy for me to assume that, surely, everyone knows xkcd. Or at least, most of my readers do. Wait, you have not heard of the stick-figure webcomic of “romance, sarcasm, math, and language“? Get with the programme already, you only have, as of the day this review was published, 2276 comics to catch up on! Started sometime in 2005 it has become one of the most popular geeky science webcomics, often consisting of only one or a few panels with stick figures. But do not let the simple drawings deceive you, the humour is clever (and the mouseover texts very much worth reading, adding an extra layer).

Munroe’s first venture into books (if we do not consider the self-published compilation xkcd, Volume 0) was What If? that offered scientifically sound explanations for unlikely scenarios. This was followed by Thing Explainer that explained complex scientific and technical concepts using only the one thousand most common English words. And now there is How To: Absurd Scientific Advice for Common Real-World Problems. In 28 chapters, the problems covered range from the seemingly mundane to the utterly absurd.

“From fording a river by boiling it dry using a field of 300 million electric kettles, to using a swarm of butterflies to send large data files: the solutions are purposefully ludicrous. “

How do you cross a river? The simple solution would be to find a shallow spot and carefully walk across that, but why do that when you can jump across it, skate over the surface, freeze it, or even boil the river away? How do you ski? Who says that skiing should be done on snow, to begin with? And what do you do when you run out of snow? On the other side of the spectrum: how do you build a lava moat? This includes proposed solutions to keeping the lava warm, your house cool, plus the costing options. 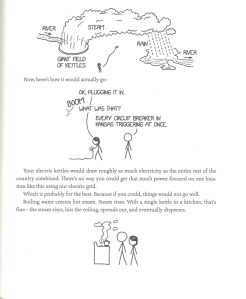 To answer his questions, Munroe seriously considers what it would actually take to make this happen, explaining engineering and physics principles by using infographics, cartoons, and equations. Want to throw a pool party in a swimming pool with walls made of cheese? Physics can tell you just how much cheese you need to prevent the pool from collapsing. After all: “Physics doesn’t care if your question is weird. It just gives you the answer, without judging.” And similarly, when considering how to move house: “I really love that we can ask physics ridiculous questions like, “What kind of gas mileage would my house get on the highway” and physics has to answer us.”

“To answer his questions, Munroe seriously considers what it would actually take to make this happen […] giving readers both a good laugh and a gentle introduction to science, engineering, and technology.”

Some of these chapters are not so much about outlandish solutions, as what solutions actually exist. When asking how to dig a hole, he explores the cost-reward trade-off when digging for treasure, and the techniques used in industry, such as vacuum excavation (this is a thing) and open-pit mining. The chapter on decorating trees, meanwhile, talks more about the largest and oldest trees in existence before digressing into which

buildings would be large enough to display them in. But, by and large, the chapters stick to the book’s brief of considering the most outlandish approaches to solving real-world problems.

Particularly nice is the input from celebrities such as test pilot and astronaut Chris Hadfield (who remained unfazed by even the most unusual variations on the question of how to make an emergency crash landing) and tennis player Serena Williams (who tested how easy it is to disable a drone using tennis balls). Similarly, the inclusion of some one-page cartoons offering many answers to a problem in a graphic form break up the book nicely.

“Want to throw a pool party in a swimming pool with walls made of cheese? Physics can tell you just how much cheese you need to prevent the pool from collapsing.”

Next to a good laugh, Munroe hopes that people learn something from this book. One such “aha moment” for myself came in the chapter on how to play the piano. There is an upper limit to the frequency of ultrasonic calls used by bats, about 150 kHz. But why? You would think that as a biologist I would have an answer to this. Charles S. Cockell said it nicely in The Equations of Life: “Because physics is life’s silent commander”, and as Munroe deftly explains, it is indeed plain old physics

that gets in the way. High-frequency sounds are very quickly absorbed by the air they travel through, meaning they can only travel very limited distances before fading out. This places an upper limit on what is useful for a bat trying to catch prey by echolocation.

If you are a fan of xkcd, this book is a must-have. Munroe’s unique sense of humour works equally well for one-panel webcomics as it does for chapters running ten or more pages, and the smoothness with which he manages this transition is enviable. But beyond the xkcd fanboys and -girls, this book can be safely read by, or gifted to, anyone who enjoys geeky humour.

Munroe’s What If? paperback

Cockell’s The Equations of Life paperback