Having just reviewed Nieuwland’s American Dinosaur Abroad, historian Lukas Rieppel’s book Assembling the Dinosaur seemed like a logical choice to read next. Whereas the former focused on the plaster casts of a Diplodocus skeleton that American business tycoon Andrew Carnegie donated to museums, Rieppel takes in a far wider sweep of history, studying the role of dinosaurs in America’s Long Gilded Age – the period from roughly 1880 to the Great Depression in 1929. This scholarly work charts the entanglement of economic transformation, notably the rise of large corporations, with the rise of palaeontology and changes in size, scope, and management of museums. Readers with an interest in the history of palaeontology will be particularly well-served by this book. 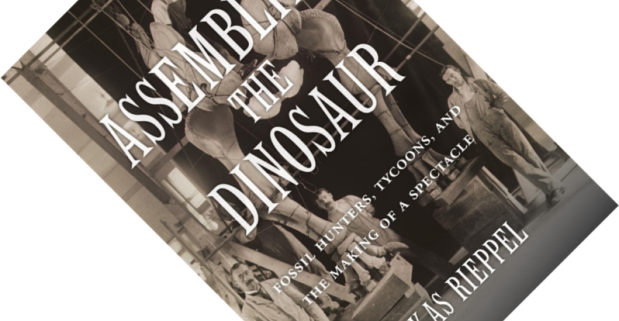 Assembling the Dinosaur: Fossil Hunters, Tycoons, and the Making of a Spectacle, written by Lukas Rieppel, published by Harvard University Press in June 2019 (hardback, 325 pages)

Rieppel takes the summer of 1877 as the starting point of his book. Three separate quarries in the American West yielded some of the largest and most complete dinosaur fossils so far. This was a very interesting and short-lived period in which independent frontiersmen were swarming across the country during the mining boom, with railway construction following in their wake. Fossils were treated like other mining commodities, to be traded for cash with interested naturalists. This led to protracted negotiations and the risk of fraud and embellishment of fossils finds to boost their value. It was also a period that would not last long.

The reason for this was the rise of a new breed of large natural history museums that mounted their own fossil-collecting expeditions. Where did these suddenly come from? This is where Rieppel clarifies what he means by the entanglement of science and capitalism. A wave of mergers and acquisitions irrevocably altered the American business landscape at the beginning of the twentieth century, with many small, family-owned businesses being consolidated into far fewer, far larger corporations. Business magnates running these corporations funnelled some of their new wealth into philanthropic activities, including museums. And vertebrate palaeontology was a topic that was both a crowd-pleaser and one that, when done right, had an air of sophistication.

Rieppel first turns to the American Museum of Natural History (AMNH). Backed by American banker J.P. Morgan, it made a huge publicity splash in 1905 with the mounted skeleton of a Brontosaurus. This event is Rieppel’s starting point for a history of this museum, from the ideas leading to its founding in 1869 up to this exhibition. But rather than the particulars, what makes this story so interesting is the wider context that Rieppel provides. At the time, the AMNH was competing against so-called dime museums whose exhibitions were far more lurid, including freaks of nature, pickled medical specimens with anatomical deformities, or outright fakes such as mermaids. Furthermore, they pioneered the idea of a museum being both a public venue and an institute of learning and scientific research. The 1905 exhibition was the stimulus for Andrew Carnegie to ask the director of his Pittsburgh museum to find a similar sauropod skeleton. This is the subject of chapter 3 of this book and my review of Nieuwland’s book American Dinosaur Abroad.

“Business magnates […] funnelled some of their new wealth into philanthropic activities, including museums. And vertebrate palaeontology was a topic that was both a crowd-pleaser and one that, when done right, had an air of sophistication.”

This theme of tension between what a museum could be and the reality in the face of competition is further explored in the last chapter. Dinosaurs were also hugely popular in movies, print publications, and amusement parks, all of which took liberties with their portrayal. Museums tried to set themselves apart by stressing how their ideas were informed by the latest science. Yet the desire to attract audiences with spectacular displays led to tensions with the scientific community, who struggled with the authenticity of displays (often cobbled together from different fossil skeletons) and the difficulties of deducing real-life posture from fragmentary fossil material.

Another case of corporate and scientific entanglement is the chapter where Rieppel examines the day-to-day operations in these new large museums, showing how they mimicked corporate management practices. He examines how dig sites were more carefully documented on grid maps, how material in transit was labelled and databased in ledgers and filing systems (computers were still far in the future), and how curators tried to conserve as much information as possible about the context in which fossils were found. With well-funded expeditions bringing in huge quantities of material, some sort of oversight was vital to make sense of the data pouring into museums.

Although most of the book is careful historical documentation, chapter 5 sees Rieppel do his own share of reinterpretation. While various authors have argued that museum exhibitions of this era (showing fearsome dinosaurs engaged in epic struggle) were symbolic for the rise of capitalism and economic survival of the fittest, Rieppel argues the opposite: their extinction was a symbol of a bygone era. In the same way that the extinction of the dinosaurs had allowed the rise of mammals (which according to the zeitgeist were obviously superior), so the economic elite was forging a narrative justifying their rise to power, using vertebrate palaeontology exhibits as part of this. Or so, in short, goes his argument here.

“Another case of corporate and scientific entanglement is the […] day-to-day operations in these new large museums [which] mimicked corporate management practices.”

A short concluding chapter examines what happened to the interest in dinosaurs after the Great Depression almost brought these philanthropic museums to their knees. Although it mentions the dinosaur heresies kicked off by Robert Bakker and others, it focuses foremost on the spectacular feathered fossil finds from China and the insight that

I concluded my review of American Dinosaur Abroad by writing that, together with King of the Dinosaur Hunters, these books form a recent triptych of palaeontology at the turn of the 19th century. Of these three, Rieppel’s book is by far the most scholarly, though the conclusions at each chapter’s end are very helpful. It is also a book that is not exclusively about dinosaurs as Rieppel brings a broad perspective to the topic – his thorough and useful notes often read like mini-literature reviews. I have only touched upon a handful of the many fascinating observations and ideas in this book. Readers with an interest in science history, museology, and the history of palaeontology are well served with this book.