If you visited the London Natural History Museum sometime before 2015 you will have been greeted by the skeleton of a sauropod dinosaur: a plaster cast of Diplodocus affectionately nicknamed Dippy. Dippy has left the building but is not the only such cast in existence. Historian Ilja Nieuwland here traces the little-known history of the philanthropic campaign that saw Scottish-born business magnate Andrew Carnegie donate plaster casts to museums around the world. Drawing on a wealth of archival material, he examines Carnegie’s reasons and the response of the recipients and the general audience, adding a valuable and surprisingly interesting chapter to the history of palaeontology as a discipline.

This book slots in beautifully with several recent books on the history of American palaeontology around the turn of the 19th century. Carnegie’s campaign is part of a larger story of business tycoons using dinosaur fossils to impress and I am reviewing this book back-to-back with Lukas Rieppel’s Assembling the Dinosaur. Furthermore, this book starts off pretty much where the biography of American fossil collector John Bell Hatcher ended. One of the last things Hatcher did before his death was to contribute to making the first plaster cast that Carnegie would donate. 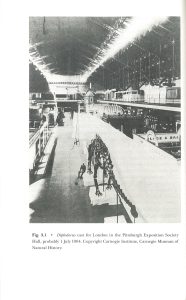 But let us back up a little. Who was Andrew Carnegie, and why was he handing out plaster casts of dinosaurs as if they were going out of fashion? There are several biographies, but Nieuwland draws heavily on Nasaw’s monstrously large 900-page book, simply called Andrew Carnegie. In very short, Carnegie was born in Scotland in 1835, after which his family emigrated to Pennsylvania when he was 12. His career is the classic rags-to-riches story: making his fortunes first in oil and then in steel production, he rapidly became one of the world’s wealthiest people. Not content to just swim in the money, he retired early and set off on a programme of philanthropy, funding museums, the arts, and especially libraries (some 2,500 of them, apparently!) He was particularly keen to resolve global conflict through the creation of an international tribunal. To that end, he mingled, and loved to be seen mingling, with politicians and royalty. Carnegie’s philanthropic activities thus served an ulterior motive.

“Who was Andrew Carnegie, and why was he handing out plaster casts of dinosaurs as if they were going out of fashion?”

In 1886, Carnegie funded the building of a library in his hometown of Pittsburgh, which brought him in contact with William Jacob Holland, the chancellor of the local university. Holland urged Carnegie to think bigger and the library turned into a number of scientific institutes, including ultimately The Carnegie Museum of Natural History, headed by Holland. And this is where Diplodocus enters the story.

The infamous Bone Wars between Edward Drinker Cope and Othniel Charles Marsh had at this point died down somewhat and had yielded large sauropod fossils. A shift in power was taking place in palaeontology from individual scientists to large institutes financed by wealthy patrons such as Carnegie who used palaeontology as a public relations exercise. And Carnegie was keen to get himself one of those newfangled sauropods for his museum, to compete with displays in other museums. It was Hatcher who found and described Diplodocus carnegii while employed by Holland and Carnegie.

A chance visit by the English king Edward VII to the Carnegie household in Skibo, Scotland, resulted in what Nieuwland dryly describes as “His Majesty notices a drawing”. Yes, the King would very much like one of these skeletons for the British Museum. Carnegie wasted no time and after deliberation with Holland, the latter suggested that making a cast might be more feasible than trying to find another complete specimen in the field. And while we are at it, Holland suggested, we could make multiple casts and give them to other heads of state. And so it came to pass.

“A chance visit by the English King Edward VII to the Carnegie household […] resulted in what Nieuwland dryly describes as “His Majesty notices a drawing”. Yes, the King would very much like one of these skeletons for the British Museum.”

From here on Nieuwland’s book proceeds largely chronologically. While the original went on display in Pittsburgh, the first cast was unveiled very successfully in London in 1903, followed over the next decade by Germany, France, an attempt in Brazil that never materialised, Austria, Italy, Russia, Argentina, Spain, and, two decades later, Mexico.

Nieuwland goes into great detail here, mining historical archives, correspondence, and newspaper articles to reveal how these gifts were received, what the media had to say about them, and how they played into the contemporary imagination in satire, art, and journalism.

I admit I was initially a bit sceptical about the book’s pitch: how interesting can it be to read about the history of a plaster cast? As it turns out, really interesting. Nieuwland has a knack for presenting a lively and atmospheric picture of the 19th century. His introduction sets the tone when he ruefully remarks that: “This was perhaps the last time in human history in which unfettered trust in scientific method and advances could be considered commonplace, and one in which the pursuit of scientific knowledge carried a prestige it never regained.” Rare period photographs liven up Nieuwland’s narrative further.

“Once [Carnegie’s] requirement – that the request for a cast was publicly communicated by a head of state – was met, the actual gifting and unveiling of the cast was a formality left to Holland and his team to sort out. “

The Diplodocus casts, however, are but a token in this story. It was interesting to see how subsequent unveilings went mostly little reported and hardly noticed. The Parisians, who absolutely adored “their” Diplodocus, are the exception and stand in stark contrast to the Austrians who felt the cast was almost foisted upon them. But this did not bother Carnegie in the least, they were just a means to an end. Once his requirement – that the request for a cast was publicly communicated by a head of state – was met, the actual gifting and unveiling of the cast was a formality left to Holland and his team to sort out. And even receiving heads of state were usually not present here. Partially the novelty of these donations quickly wore off, partially newer and larger fossils demanded attention (Germany, for example, unearthed large fossils in East Africa).

Similarly, the biology of Diplodocus is not the focus of this story (readers can refer to Biology of the Sauropod Dinosaurs and The Sauropod Dinosaurs instead), nor was it something that particularly interested Carnegie. Nieuwland describes his book as an “object biography”. The one episode where the science intersects with these casts was when American palaeontologist Oliver Perry Hay started questioning its life reconstruction, arguing for a more reptilian, sprawling posture. This argument was enthusiastically embraced in Germany and nearly resulted in a diplomatic spat between the US and Germany over whose approach to palaeontology was superior, combining scientific with political and ideological arguments. The period Nieuwland describes here is also of interest to palaeontologists as this is where the idea of sauropods living an aquatic lifestyle was seriously, though not universally, considered. Despite what some seem to think, that idea has now been thoroughly discredited.

American Dinosaur Abroad offers a fascinating and well-researched look into palaeontology at the turn of the 19th century, and how interest in dinosaurs reverberated, and was used, outside of scientific circles. If you have any interest in the history of palaeontology as a discipline this book shines a light on a little-known episode. And while you are it, I highly recommend you pick up King of the Dinosaur Hunters and Assembling the Dinosaur. The three form a perfect triptych.