Fungi have been eaten, worshipped, reviled, and studied for centuries. Neither animal nor plant (though originally classified as such), they occur pretty much everywhere, from the frigid icy wastes of Antarctica to between your toes. And yet I, like many others, know surprisingly little about them. With part of their life happening underground and on a microscopic scale, they easily evade our attention. With Fungipedia, mycologist Lawrence Millman provides a delightful little introduction to the world of fungi. 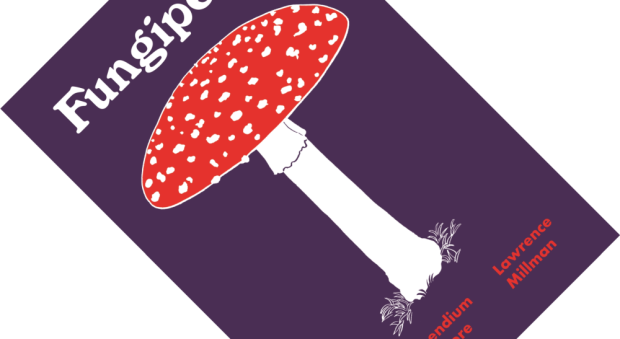 Princeton University Press has gone mycology-mad this season. At one end of the spectrum, they have just published the massive 2-volume set Fungi of Temperate Europe: over 1700 pages of photographic goodness for the serious mycologist. At the other end of the spectrum, there is this: a whimsical 184-page A-Z miscellany that could be slipped into your back pocket. 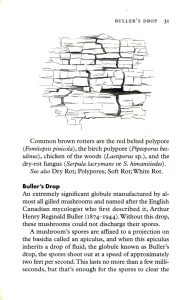 The approach to this book is straightforward – Millman has written approximately 180 short entries on the biology, ethnography, history, and students of fungi. Line drawings from the hand of Amy Jean Porter are scattered throughout, further lightening up the text.

Fungipedia provides plenty of interesting tidbits of information, but it is not all factoids. In fact, it concisely defines some of the major taxonomic fungus groups: ascomycetes, basidiomycetes, boletes, coral fungi, corticioid fungi, and yeasts to name but a few. Even a group such as slime moulds – technically not fungi – are described. Similarly, it explains some of the biological basics. Don’t know the difference between endo- and ectomycorrhizal fungi? Fungipedia has got you covered. Can’t point out the gills, stem, cap, or veil on a drawing of a mushroom fruiting body? Millman explains what they are and what they look like.

“Fungipedia provides plenty of interesting tidbits of information, but it is not all factoids. “

Beyond the basics, Fungipedia lifts the lid on some of the more outlandish biological particularities of fungi. Such as their tolerance for, and sometimes dependence on, extreme cold (psychrophiles) or dryness (xerophiles). And what of the mycelium, that underground network of thread-like hyphae invisible to the naked eye? Peter Wohlleben has been making waves with his book The Hidden Life of Trees, popularising the finding that trees can communicate with each other via fungi, something dubbed the “wood wide web” (see also this short TED-Ed talk). You can read more on this from the fungi’s perspective in Merlin Sheldrake’s Entangled Life. 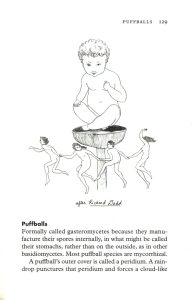 I personally found the entries on the people some of the most fascinating reading. I never knew that Beatrix Potter was first and foremost a mycologist, but only turned to illustrating because, as a woman, her scientific work was ignored at the time. A similar sign of the times was that it was a reverend, the clergyman Miles Berkeley, who coined the term mycology in 1837. From the pioneers (Carolus Clusius, a mycologist some 300 years ahead of his time), to the eccentric (Sam Ristich, who taught at the New York Botanical Garden with, apparently, characteristic enthusiasm), or the crestfallen (John Allegro, whose academic career took a nosedive after publishing The Sacred Mushroom and the Cross), Millman gives short, informative biographies of some notable figures.

“[…] amidst all the informative entries there is plenty of space for witty entertainment […] what to make of the fungus that goes by the common name of “shit on a stick”?”

Plenty of rots and diseases caused by fungi have found their way onto these pages, as well as edible, medicinal, and psychedelic mushrooms. There is a good deal of deserved scepticism regarding the curative powers of medicinal mushrooms, with Millman noting that anything that claims to cure AIDS and cancer and gout and migraine and etc. etc. is suspect. His treatment of psychedelic mushrooms and other ethnomycological topics is somewhat more agnostic though, and he sees the value of research into the neurochemical properties and effects of fungal compounds. 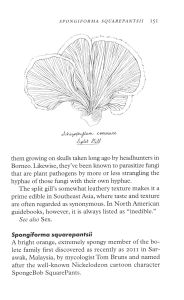 But seriousness aside for a moment, amidst all the informative entries enough space remains for witty entertainment and spectacular fungal facts. From berserker mushrooms (supposedly sending Vikings into a fit of rage) and humongous fungus to the delights of fairy rings or zombification by Ophiocordyceps species. Or what to make of the fungus that goes by the common name of “shit on a stick”? (Because, well, that is what it looks like…).

The air of mystery that surrounds fungi lends itself particularly well to these kinds of books, with Mycophilia being another good example of a recent book that plays into this. Mycologist Nicholas Money, whose book The Rise of Yeast I reviewed last year, has also tapped into this vat with his books Mushroom and Mushrooms. Similarly, Jens H. Petersen, one of the authors of abovementioned Fungi of Temperate Europe, wrote a very accessible introduction with The Kingdom of Fungi. Even so, Fungipedia is a delightful little book to wile away some hours. The neat cloth binding with debossed illustration immediately shouts out “stocking filler!” and this would make a nice little gift for the mycologically curious. But, as Leif Ryvarden (an experienced Norwegian mycologist and author of Poroid Fungi of Europe) also mentions, even seasoned mycologists will here find things to entertain and enlighten them.

Allegro’s The Sacred Mushroom and the Cross paperback

Pollan’s How to Change Your Mind paperback

Money’s The Rise of Yeast hardback

Petersen’s The Kingdom of Fungi hardback