The recent 50th anniversary of the first moon landing was a reminder of how far we have come, but also how far we still have to go. Since humanity’s last visit in 1972, there have been plenty of ambitious plans to return one day or to even land people on Mars. For now, to paraphrase Carl Sagan, they are places that we can visit, yes. But settle? Not yet. How about closer to home though? With Outposts on the Frontier, freelance space historian Jay Chladek takes the reader on a factual fifty-year history of space stations.

Outposts on the Frontier: A Fifty-Year History of Space Stations, written by Jay Chladek, published by the University of Nebraska Press in July 2017 (hardback, 494 pages)

This book is part of the University of Nebraska Press’s prestigious book series Outward Odyssey: A People’s History of Spaceflight, which provides in-depth histories of space programmes and key people involved. If you are not much of an astronomy buff (I am not) many of the titles in this series seem quite specialist, but Chladek’s book called out to me.

As Chladek notes, landing on the moon was initially a distant secondary goal – the logical first step would be to have an outpost orbiting Earth as a staging step for further exploration. The book starts amidst the tensions of the Cold War with the 1960s US plans for a Manned Orbiting Laboratory which, despite extensive preparations, testing, and investments, was mothballed before taking off. From here, the book proceeds chronologically, paying close attention to achievements by both nations.

Chladek walks the reader through the Soviet Almaz, Soyuz, and Salyut programmes of the 1970s, and the American Skylab and short-lived Spacelab programme. The first tentative cooperation – in the form of a rendezvous in space between an American Apollo and a Russian Salyut craft – was incredibly influential in bringing the two superpowers together and set the tone for the future. For one thing, it required agreeing on something as mundane as compatible docking ports.

“The first tentative cooperation [between America and Russia] required agreeing on something as mundane as compatible docking ports.”

Obviously, most space is reserved for the Russian space station Mir, operational from 1986 to 2001, and the later International Space Station, the first modules of which were launched in 1998. This is also where the venture becomes more international, with other countries contributing manpower and materials. An important supporting player in this story was NASA’s Space Shuttle programme that ran from 1972 to 2011. It was one of a fleet of vehicles delivering goods and astronauts into space.

Chladek writes with flair and a meticulous eye for detail, giving an almost blow-by-blow account of the missions flown, the people on board, and the setbacks experienced. This book could easily have succumbed to an overdose of engineering geekery and technical arcana on-par with that of trainspotters. Though there is plenty of that, including some nice diagrams and photos of space stations, as much attention is lavished on the human side of the story, in line with the aim of the Outward Odyssey series.

Based on archival material and interviews, Chladek sketches the camaraderie, ingenuity, and bravery of the men and women who went out there. But also the grind of training, the arduous learning a foreign language (Russian or English), or the unforgiving selection processes that saw some people removed from missions over minor health or scheduling setbacks. Onboard, much astronaut time is spent on routine tasks and a strenuous exercise regime to keep fit in a zero-g environment. Chladek reveals much about daily life on a space station, such as maintaining a breathable atmosphere and handling the basic biological needs of eating, sleeping, and going to the toilet.

“When you are floating amidst the hostile, freezing vacuum of outer space in – effectively – a tin can, the smallest of technical malfunctions can trip you up”

If anything, Chladek convinces that nothing in space is ever matter of course. The procedures required to move a docked Soyuz capsule from one end of the Salyuz to the other were almost laughably baroque. Solar panels seem to have a nasty habit of not properly unfolding, requiring risky excursions in space suits. And when you are floating amidst the hostile, freezing vacuum of outer space in – effectively – a tin can, the smallest of technical malfunctions can trip you up; a jammed cooling fan can cause a fire, coolant pipes can leak poisonous chemicals, and docking a new module is never without risk. Much detail is provided on the constant maintenance and repairs that are required.

Reading of the numerous incidents, technical malfunctions, and wear-and-tear of parts, it strikes me as a miracle that in all these decades there has not been a single death on a space station. Clearly, stringent astronaut training and intense scrutiny by mission control back on Earth pay off. As with flying, take-off and landing are the most dangerous moments, and that is where fatalities have occurred. Because of their impact on space missions, Chladek describes in some detail the disasters that befell the returning Soyuz 11 capsule, the 1986 launch of the Challenger space shuttle, and the 2003 return of the Columbia space shuttle.

There are some features that I personally think benefit history books like this. An (illustrated) timeline and a section with the cast of characters can be very helpful as a reference but are rarely included. Any book touching on engineering topics is bound to be rife with acronyms. Outposts on the Frontier is not too bad in that regard, though I would have welcomed a separate list (the index clarifies most, but not all acronyms).

“Reading of the numerous incidents, technical malfunctions, and wear-and-tear of parts, it strikes me as a miracle that in all these decades there has not been a single death on a space station.” 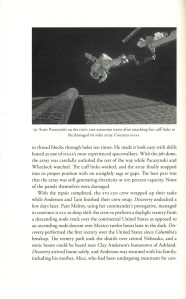 A more structural shortcoming of this book was remarked upon on The Space Review website; that it is a book of “the who and what rather than the why and how”. Chladek details technical and design improvements as experience was gained and accidents narrowly avoided. Biomedical monitoring and testing of astronauts before, during, and after missions to elucidate the effect of a prolonged stay in space on the human body is a recurring theme throughout the book, occupying as it does much of their time budgets. Chladek also describes the laboratory modules and the bacteria, plants, fish eggs, and even bird eggs that have been brought out to space stations. But what have we learned from all of this? One day, perhaps, a mission scientist could fill another book with the answers.

This notwithstanding, my impression is that what Chladek does, he does exceedingly well. Outposts on the Frontier is a labour of love with much attention to detail. It is also very accessibly written and captivates over the full stretch of its almost 500 pages, weaving in a very human story. As a comprehensive, one-stop overview of both US and Soviet space station history, this book is without equal and offers a superb entry into this topic. I am already eyeing up other books in this series.

Outposts on the Frontier hardback

White’s Into the Black paperback