Endothermy, colloquially known as warm-bloodedness, was a major breakthrough in the history of life on Earth. It gave rise to the active lifestyle of birds and mammals. But how did it evolve? Research into this question has been ongoing for decades, though in the eyes of evolutionary physiologist Barry Gordon Lovegrove, the field has stagnated amidst competing single-cause hypotheses that all try to find that one killer explanation. In his wide-ranging Fires of Life, he brings together many disparate strands of research and gives an overview of our thinking on the evolution of endothermy in mammals and birds. Providing food for thought for students in this field, it also is a great overview for the general reader that stands out for its superbly accessible writing.

Some terminology first. Why do physiologists speak of endo- and ectothermy, rather than warm and cold-bloodedness? Simply because warm-blooded mammals can experience low body temperatures during hibernation, while cold-blooded reptiles can bask in the sun and become hotter than mammals. It is more instructive to focus on the underlying process: endotherms produce body heat internally through metabolic processes while ectotherms are dependent on their environment for their body temperature. Fires of Life draws on a heavily expanded 2012 review paper published in Biological Reviews and is divided into two parts. Lovegrove first discusses what the fossil record reveals about endothermy before turning to data gathered from living animals. 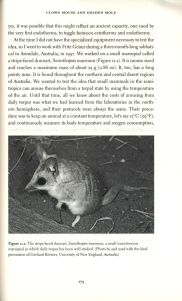 Chronologically covering key periods in evolutionary history, Lovegrove discusses existing ideas on how and why endothermy evolved and outlines his overarching framework. The first protomammals, the therapsids, evolved during the Permian, some 299 to 252 million years ago. This includes the very successful Lystrosaurus that dug burrows, which is one strategy to deal with temperature fluctuations. However, it was the late-Permian mass extinction that really kick-started endothermy. As the planet heated up, therapsids adopted a strategy of “breed fast, die young”, calling for high metabolism. Clever study of indirect fossil evidence (e.g. bone histology and isotope analyses) supports these ideas.

As we know, the reptiles took over at this point. One reason is that they are better adapted for dry areas – they convert waste products into uric acid excreted with their droppings, rather than us mammals who lose water weeing urea. To avoid competition with the bigger reptiles, ancestral mammals became active at night, while both ancestral birds and mammals miniaturized. Since small objects cool down faster than large ones (they have lower thermal inertia), Lovegrove argues that size reduction was a powerful selective pressure for the evolution of endothermy. Other hallmarks covered are the evolution of feathers, fur, and the first flying reptiles, leading to birds.

“As the planet heated up [after the Permian], therapsids adopted a strategy of “breed fast, die young”, calling for high metabolism.”

Some of this material was covered in a very pop-science fashion by Liam Andrew. Lovegrove’s overview goes deeper while remaining incredibly readable, although it lacks a bit in structure. Rather than a point-by-point discussion of different hypotheses, these are all wrapped up in the narrative somewhere. One very helpful feature to deal with the torrent of names of ancient and extinct clades is the inclusion of family trees in an appendix. I referred to them frequently. The other highlight is his writing, always explaining terminology and eschewing long complicated sentences in favour of many shorter sentences. Some only five words long.

The second part is where Lovegrove discusses his and other’s research on living animals. It allows him to switch gears and tell many amusing anecdotes that come with doing fieldwork in the tropics. One of his main points concerns hibernation and torpor (shorter periods of inactivity). Some scholars argue that the evolution of endothermy was an 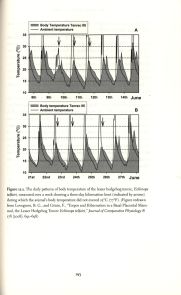 all-or-nothing shift to a permanently raised body temperature, 24 hours a day, which would make hibernation as we currently see it a derived trait. Lovegrove, on the other hand, thinks that the first endotherms were facultative endotherms, i.e. able to switch between ecto- and endothermy, only using it when really needed (e.g when breeding). This makes hibernation an ancient, conserved trait. Evidence for the latter comes from studies on existing primitive mammal groups such as echidnas, possums, xenarthrans (armadillos belong here), elephant shrews, golden moles, and tenrecs (a mammal endemic to Madagascar that resembles a hedgehog). Research has shown that all of these can and do hibernate.

“Lovegrove thinks that the first endotherms were facultative endotherms […] only using it when really needed (e.g when breeding) [making] hibernation an ancient, conserved trait.”

There are many really interesting ideas and observations here, of which I can only mention some highlights. Tenrecs can hibernate for months without waking up because the environmental temperature in Madagascar never drops below values that would cause ischemia (i.e. biochemical damage resulting from restricted blood supply). Long-term hibernation and burrowing could offer one explanation for how mammals survived the mass-extinction after the meteor impact during the K-Pg event. 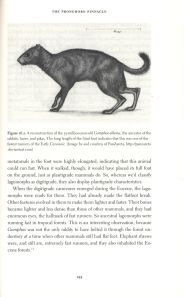 One thing that raised my eyebrow was repeated mention of Roger Seymour’s argument that the giant sauropods were probably aquatic because life on land would have required an impossibly high blood pressure. Brian J. Ford also referenced Seymour’s work, although the hysterical tone of his book pretty much excludes it from serious discourse for me. But it does show that Ford did not dream it up in a vacuum. There are scientists willing to go on record and defend this notion. Lovegrove furthermore has his own favourite ideas and is outspoken about what he calls the Holarctic Hibernation Paradigm: the larger number of Northern hemisphere scientists in this discipline often drowns out the voices of Southern hemisphere researchers. And living in colder, seasonal climates they are not accustomed to thinking about hibernation evolving in a tropical world.

Lovegrove wraps up the many ideas in a larger, reasonably argued framework that he willingly calls a working model while we gather more data. That, and mention of his own past mistakes do much to balance any perceived rebellious streak. No doubt there are ideas here that palaeontologists and physiologists disagree with. That is all part and parcel of doing science and Lovegrove is familiar with the many debates. However, if it stimulates others to write a similar carefully articulated book we are all the better off for it. Fires of Life, meanwhile, makes physiology incredibly fascinating and ranks very high on my list of favourite books on evolution this year.

Sues’s The Rise of Reptiles hardback

Ford’s Too Big to Walk paperback

Donations
Follow The Inquisitive Biologist on WordPress.com
Join 1,432 other subscribers