If you are interested in dinosaurs, the last two years have seen a slew of great books published, and there is more in the pipeline. The latest I am reviewing here is The Dinosaurs Rediscovered from the well-known British Professor of Vertebrate Palaeontology Michael J. Benton. With a huge number of possible topics you could write about, and an already saturated book market, Benton has set himself a very specific aim: to show how the science of palaeobiology has moved from a descriptive, speculative scientific discipline, to a hard, testable, rigorous one. In other words, given that palaeontologists nowadays regularly make some pretty amazing and precise claims about creatures long extinct, how, exactly, do they know that?

“The Dinosaurs Rediscovered: How a Scientific Revolution is Rewriting History”, written by Michael J. Benton, published by Thames & Hudson in April 2019 (hardback, 320 pages)

If this sounds familiar, indeed, when I reviewed Steve Brusatte’s book The Rise and Fall of the Dinosaurs: The Untold Story of a Lost World, I praised the enviable ease with which he explained modern methodologies. Now, with all due respect to Brusatte (and I really, really enjoyed his book), Benton has almost 30 years on him. Next to having authored standard textbooks such as Vertebrate Palaeontology (currently in its fourth edition) and co-authored Introduction to Paleobiology and the Fossil Record (currently in its second edition), he is also the series editor for Wiley-Blackwell’s textbook series Topics in Paleobiology, and he has previously authored When Life Nearly Died: The Greatest Mass Extinction of All Time with Thames & Hudson, dealing with the end-Permian mass extinction. With a career spanning some four decades, if anyone can comment first-hand on the evolution of the field, it is Benton. 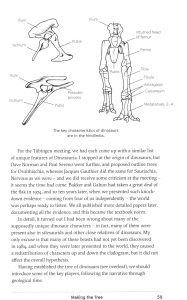 After a brief introduction on how scientific discoveries are made, and a short foray into the philosophy of science, the bulk of the book consists of nine chapters documenting areas where palaeontology has been revolutionised. Partially by new fossil finds, but, much more importantly, by new tools, new technologies, more powerful computers, lateral thinking, and interdisciplinary approaches.

Benton’s opening of the book is perhaps slightly risky, as he has put the most technical chapters first. There is the question of when the dinosaurs first evolved. After the giants of the Paleozoic went extinct (see my last review of Carboniferous Giants and Mass Extinction: The Late Paleozoic Ice Age World), did the dinosaurs opportunistically explode onto the scene, or did other reptile groups slowly fade with dinosaurs taking over the proverbial relay race? New computational tools have pushed the origin story further back in time, but have also shown that both explanations have something going for it.

“Ancient DNA may have revolutionised archaeology […], but Benton explains why we shouldn’t expect Jurassic Park to become reality anytime soon.” 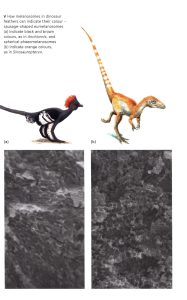 Similarly, the picture of the dinosaur family tree benefited first from the cladistic revolution, which saw a different way of thinking about classifying species, collecting and analysing as many informative characters as possible to determine relationships. Then, with access to supercomputers, Benton and his team have been involved in producing an all-encompassing family tree, a so-called supertree (which you can explore in all its glory here), revealing how the dinosaur lineage diversified rapidly early on, but the rate of speciation slowed down after that. That things never stay still was shown only recently with Baron et al.‘s 2017 Nature paper that proposed some radical changes to the family tree (for an accessible take on it, see Darren Naish’s blog post at Scientific American).

If this is all a bit technical, despair not, the remainder of the book deals with more “mundane” questions your typical six-year-old might ask. Excavation techniques might have changed little since the dawn of the discipline, but imaging tools such as photogrammetry have revolutionised what palaeontologists can document at a dig site, while CT scanning offers a non-destructive technique afterwards to image what you have dug up. And new microscopy techniques, together with some fantastically preserved fossils, have revealed much about the colour of dinosaurs (and hey, feathers!).

“What really helps this book shine are the illustrations. Thames & Hudson […] has redrawn many of them specifically for this book.” 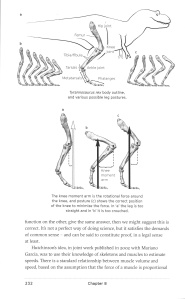 Ancient DNA may have revolutionised archaeology (see my review of Who We Are and How We Got Here: Ancient DNA and the New Science of the Human Past), but Benton explains why we shouldn’t expect Jurassic Park to become reality anytime soon. Nevertheless, even without dinosaurs stomping around here and now, we have learned so much about how they lived. Bone histology and X-ray imaging have revealed growth rates, while finite element analysis (a method borrowed from structural engineers who use it to stress-test designs of bridges and buildings on computers) has allowed calculations of bite forces and how dinosaurs ate, while analyses of microwear on tooth surfaces (see my reviews of The Tales Teeth Tell: Development, Evolution, Behavior and Evolution’s Bite: A Story of Teeth, Diet, and Human Origins) has shed light on their diet. Biomechanical computations and careful analyses of trackways tell us more about their posture, how they moved, whether they could run, and what the deal is with them flying, or at least flapping about.

And there is, of course, the always fascinating topic of their extinction. Benton has first-hand seen the rise and rise of the Alvarez asteroid impact hypothesis (see T. rex and the Crater of Doom and my review of The Ends of the World: Volcanic Apocalypses, Lethal Oceans and Our Quest to Understand Earth’s Past Mass Extinctions), despite the initial pushback from the uniformitarian crowd (see my review of Cataclysms: A New Geology for the Twenty-First Century), and he provides a great overview of why this idea has become so widely accepted. Even here, facts move quicker than book publishing can keep up, and the reveal (not two weeks ago!) of a site potentially recording the direct aftermath of the impact has raised eyebrows around the world (see DePalma et al.‘s PNAS paper and the accompanying article in The New Yorker). And it probably has more than one palaeontologist fervently hoping this is not an elaborate hoax. I am cautiously optimistic so far – this could be mindblowing, but let’s see more hard proof first.

“[Benton] convinces that now is a very exciting time, indeed, to be a palaeontologist. I can’t wait to see what surprises lie in store in the near future.”

In addition to Benton’s accessible writing, what helps this book shine are the illustrations. I regularly bemoan how few publishers get this right; complex figures are reproduced directly from their source in greyscale so you can’t tell apart the different lines and symbols in graphs, they are often too small, or the source material is so poor that resolution suffers or compression artefacts are visible. Not this book. Thames & Hudson is obviously known for their illustrated books, and checking the illustration credits suggests that their in-house art studio (?) has redrawn many of them specifically for this book. This in addition to two colour plate sections and some really nice species profiles. A job well done, and I wish more publishers went to this effort.

The Dinosaurs Rediscovered is easy to recommend. Benton’s enthusiasm is infectious, and his skill at packing so many exciting developments in this book speaks of his deep involvement in this field. He provides a fantastic overview of the revolutions in palaeontology over the last few decades and convinces that now is a very exciting time, indeed, to be a palaeontologist. I can’t wait to see what surprises lie in store in the near future.

or hardback or ebook

Brusatte’s The Rise and Fall of the Dinosaurs paperback

Reich’s Who We Are and How We Got Here paperback