Primaeval, pristine, playground of Indiana Jones, home to ancient ruins and primitive tribes – nothings says wilderness more than tropical rainforests. They have had a firm grip on our collective imagination for centuries as the antithesis of civilization. But after reading archaeologist Patrick Roberts’s Tropical Forests in Prehistory, History, and Modernity, it seems my introduction is a load of lyrical rubbish. Synthesizing an enormous body of scientific literature, this book dispels the Victorian-era explorer-mystique to reveal a picture that is far more fascinating.

In my recent review of The Ethnobotany of Eden: Rethinking the Jungle Medicine Narrative I already touched on what is the central thesis of this book: far from pristine wilderness untouched by humans, rainforests have been shaped by us for many millennia. After introducing the sheer diversity of habitats that hide under the catch-all term rainforest (from evergreen tropical rainforest to montane rainforest, freshwater swamp forest, and others), the book takes a chronological approach, beginning with hominin evolution. 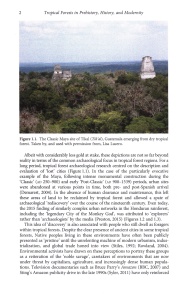 The dominant narrative in palaeoanthropology has been that as humans evolved, they came down from the trees and onto the plains of Africa. A shift to upright walking on two legs is often cited as one line of evidence, but morphological and observational studies on apes increasingly show that bipedalism is common in forest environments. Analyses of fossil teeth, both the chemical composition of enamel and patterns of microwear, have been used to reconstruct the diet of our ancestors (see my reviews of The Tales Teeth Tell: Development, Evolution, Behavior and Evolution’s Bite: A Story of Teeth, Diet, and Human Origins). But these results, too, do not prove equivocally that humans shifted exclusively to savannah habitat. Roberts makes the case that much research is pointing towards our ancestors spending most of their time in woodland-grassland mosaics.

Once our ancestors left Africa, a popular explanation for their dispersal has been the pursuit of fish and other marine resources, which saw them following the coastline of Asia to then both island-hop through Southeast Asia and the Pacific, and trek over the Bering Land Bridge to colonise North and South America (see my review of Fishing: How the Sea Fed Civilization). Rainforests would only have been colonised during the Holocene, from 10,000 years ago onwards. But recent archaeological, palaeobotanical, and palaeoenvironmental work in the tropics that Roberts reviews here instead shows humans occupying rainforests from at least 45,000 years ago, possibly even much earlier.

“LiDAR […] has revealed the sheer scope, size, and complexity of many jungle ruins, lending support to the idea that these areas once housed tens of thousands of people.”

The archaeological meat of the book comes with chapters 5 and 6, which survey a vast body of work that is showing two things. First, that rainforests have seen millennia of agricultural practices that blur the line between foraging and farming, with practices such as tree cropping, controlled burning to create mosaic patches, corralling of wild animals such as turtles, and the tending to and moving around of various food plants (see for example The Maya Forest Garden: Eight Millennia of Sustainable Cultivation of the Tropical Woodlands). James C. Scott has similarly argued that, for a long time, agriculture was a small part of a larger portfolio of different strategies to make a living (see my review of Against the Grain: A Deep History of the Earliest States), but he did not specifically mention the possible role of tropical rainforests, focusing instead on the Middle East. 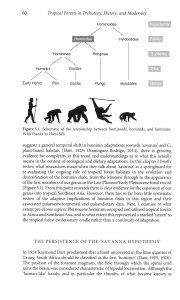 Second, this form of proto-agriculture allowed for the existence of large, but low-density urban areas. Roberts takes the reader on a tour of forest ruins in Mesoamerica (the Maya), Cambodia, Sri Lanka, the Amazon, and the Pacific to show the many different forms that this took. One technological development, in particular, has produced spectacular findings. LiDAR, or 3D laser scanning, is a survey method that allows visualisation of structures hidden under vegetation and has revealed the sheer scope, size, and complexity of many jungle ruins, lending support to the idea that these areas once housed tens of thousands of people.

Given all of the above, how, then, did rainforests come to symbolise pristine wilderness? In short, because history is written by the winners. Our historical narrative is inherently Eurocentric, which, some argue, can be traced back all the way to how the ancient Romans and Greeks saw the world (see A History of the World in Twelve Maps). But it was really with the exploration from the time of Columbus onwards that infectious disease, warfare, and slavery killed millions and largely eradicated their history. In its stead, we created first the myth of the noble savage, a relic of past human adaptation (though see The Myth of the Noble Savage for a critical appraisal), and more recently the idea of indigenous groups as active conservationists. Roberts baulks at both these ideas, arguing they paint Indigenous people in a corner as passive subjects living in isolation, threatened by colonialism and, nowadays, capitalism.

“[…] how, then, did rainforests come to symbolise pristine wilderness? In short, because history is written by the winners.”

Instead, with this book Roberts builds a well-supported case that these groups have been shaping and manipulating rainforests for millennia. Now, this is in no way is intended to down-play more recent destruction and he is at pains to clarify that this is not a carte-blanche for their current unchecked exploitation by Western forces such as the logging and mining industry. But he does think that the impact of Indigenous communities differs only in degree, not in kind (quantitatively, not qualitatively). This, he argues, should be taken on board when trying to define when the Anthropocene started, a discussion that has, so far, largely revolved around geology and stratigraphy (see my review of The Anthropocene as a Geological Time Unit). More importantly, it points towards the value of Indigenous knowledge, showing how it is possible to live in these areas without destroying them. 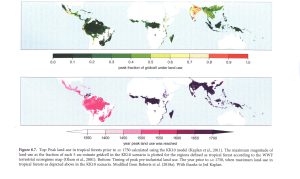 The book makes good use of photos, graphs, and maps, though a minor niggle I have is their reproduction. Many are quite small, and their resolution betrays digital rather than offset printing, sometimes obscuring details. Why many of them have been printed in greyscale when colour is used for some others is another curiosity. Given the high price of the book, it is a shame the publisher did not include a colour plate section with larger reproductions.

That aside, Tropical Forests in Prehistory, History, and Modernity is an incredibly valuable and information-dense book that reviews a vast body of literature from fields such as palaeontology, archaeology, anthropology, and ethnology (by my estimate, the 70-page reference section contains close to 1500 citations). The above outline I have given only touches on the main arguments, but there are many, many more interesting findings in here. The book is scholarly and will require your full attention, but is certainly not stuffy (Roberts can’t resist the occasional pop-culture reference). Despite presenting a revisionist account, the tone is far from combative or polemic, instead carefully building a patient and exhaustive argument. To my mind, this is a major contribution to archaeology that should be a reference for years to come.

Voeks’s The Ethnobotany of Eden hardback

Scott’s Against the Grain paperback

Brotton’s A History of the World in Twelve Maps paperback

Ellingson’s The Myth of the Noble Savage paperback