I cannot deny that the first thing that came to my mind upon seeing this book was Leslie Nielsen’s slightly smutty beaver joke in Naked Gun. Shame on me, as environmental journalist Ben Goldfarb presents a serious, incisive book that shows just how important beavers and their dams are for biodiversity, ecosystem health, and hydrology. If humans are now said to be a geological force to be reckoned with, birthing the term Anthropocene, our persecution of beavers led to the loss of another geological force. 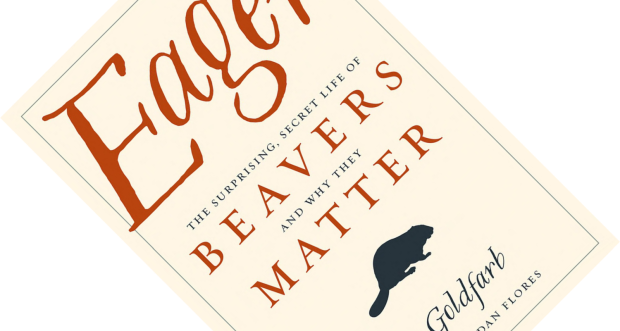 “Eager: The Surprising, Secret Life of Beavers and Why They Matter“, written by Ben Goldfarb, published by Chelsea Green Publishing in July 2018 (hardback, 287 pages)

Eager mixes equal measures environmental history with reportage on ongoing conservation and wildlife reintroduction programmes. To understand how we got to where we are, Goldfarb recounts the heydays of the American frontier times, when white settlers fanned out over the USA, killing, trapping, and hunting anything that moved. Bison, wolves, and the passenger pigeon are some of the better-known examples of animals that were virtually extirpated (see some suggested reading below), but there was an equally lively trade in beaver pelts. This sad chapter in history is explored more in-depth in Fur, Fortune and Empire: The Epic History of the Fur Trade in America and Once They Were Hats: In Search of the Mighty Beaver, but Goldfarb gives a good overview of the scale of the onslaught as trappers caught beavers by the tens of thousands in mere decades.

To understand why this was such a loss requires Goldfarb to invoke the specter of shifting baselines, which he poetically describes as long-term amnesia: “every year we lose more and remember less”. I have mentioned this syndrome before in my reviews of Vanishing Fish: Shifting Baselines and the Future of Global Fisheries and All the Boats on the Ocean: How Government Subsidies Led to Global Overfishing, but it does not just apply to overfishing. People simply forgot that beavers once roamed the landscape, forgot how their dams created meandering rivers with regularly flooded wetlands that are havens for diverse forms of wildlife large and small. Forgot how their dams maintained healthy groundwater levels, prevented flash floods, and tempered erosion. The denuded landscapes left in the wake of the ravages of the fur trade rapidly fell victim to overgrazing and trampling by cattle, the attendant erosion causing streams to rapidly cut through landscapes down to the level of the bedrock, lowering groundwater levels in the process. The impact of shifting baselines has been so pervasive that even some 19th-century biologists fell victim to it, which greatly hampered reintroduction efforts in for example California, as the prevailing opinion (even amongst academics) was that beavers had only existed in isolated pockets, and never at high altitudes.

Europe, which Goldfarb explores in chapter 9, fared even worse. Remember where all those frontier-immigrants came from in the first place? Centuries after Europeans had already hunted and trapped most wildlife out of their continent did they continue these lucrative but destructive campaigns overseas. Against this dark history, Goldfarb paints an uplifting picture of a current-day ragtag army of self-styled Beaver Believers: conservationists, landowners, environmental managers, even some cattle ranchers and farmers, who are fighting to reintroduce beavers and let them take over stream restoration.

We meet Mike Callahan, a former physician-assistant at a methadone clinic who invented flow devices: low-tech beaver-proof structures of pipes and fences that partially drain a beaver pond to prevent catastrophic flooding of nearby roads and properties, now highly in demand throughout the US. There is Nick Weber, a scientist who has been imitating beavers by constructing artificial dams that have beneficial effects on the hydrology of landscapes and are not infrequently colonised be returning beavers, giving them a leg-up when re-establishing themselves. Or Heidi Perryman, whose non-profit Worth a Dam has been ceaselessly campaigning for the benefit of beaver-dom, dispelling many myths and misconceptions in the process.

Goldfarb spends time with these and many others who are passionate about what well-known naturalist George Monbiot has called rewilding (see his book Feral: Rewilding the Land, Sea and Human Life). This is the idea of not just reintroducing species, but restoring functional ecosystems – not by micro-managing them, but by letting them run their own wild course. Speaking of Monbiot, Goldfarb touches on the viral YouTube video about the return of wolves to Yellowstone National Park for which Monbiot provided the narration. This hotly contested video makes it sound as if wolves have single-handedly changed whole ecosystems. Many ecologists accuse it of simplifying matters or of just being outright wrong, whereas others defend it. It is not unlikely that beaver reintroductions have played an important but overlooked part in this story, and I am happy to see Goldfarb bringing up the controversy around this video.

“Though it might seem as if Goldfarb is imbuing them with near-mythical powers, beavers are a keystone species”

But above all this rises the beaver – the unmistakable heroes of this book. Though it might seem as if Goldfarb is imbuing them with near-mythical powers, beavers are a keystone species – one that has an outsized effect on an ecosystem. This is clear from the environmental history that he so meticulously documents here, where the removal of beavers changed and destabilised whole landscapes. But it is equally clear from the spectacular results of current reintroduction projects. Beaver dams and their slowing down of rivers and streams have tremendous positive effects on both the biotic and abiotic landscape. Which is just academic shorthand for saying that they create environments suitable for living creatures (fish fry, amphibians, insects, birds, mammals, and plant species), but also have a positive impact on its geomorphology (e.g. the shape of landscapes, and rates of erosion and silt deposition) and hydrology (e.g. groundwater levels).

Though I have always had a superficial mental image of beavers as those dam-building rodents, I found Eager to be a revelatory and very interesting book. The regular castorid puns and rich alliteration might not be to everyone’s taste, admittedly, but overall my feeling was that the prose flowed off the pages into my eyeballs. Eager is clearly far more than a dry, scholarly treatise on the subject. In my opinion, Goldfarb here successfully advocates the beaver’s cause while also writing a beautiful book.

Backhouse’s Once They Were Hats paperback

Finley’s All the Boats on the Ocean hardback

Some books on historical overhunting in America:

Temple Hornaday’s The Extermination of the American Bison hardback

Isenberg’s The Destruction of the Bison paperback

McIntyre’s War Against the Wolf hardback

Greenberg’s A Feathered River Across the Sky paperback

Avery’s A Message from Martha paperback