Given that dinosaurs are no longer around, everything you think you know about what they look like comes from illustrations, models, movies, and merchandise. But how much of this is actually accurate, and how much of it is rather geared towards appealing to our sensibilities? Mark Witton is a man with a mission: to elevate the genre of palaeoartistry to one depicting scientifically accurate renditions, based on informed speculation and careful study of fossils and anatomy. Rather than a book that shows you how to draw a dinosaur, The Palaeoartist’s Handbook is a fantastically useful primer for both aficionados and budding artists into what actually can and should go into making good palaeoart.

Witton first gives a short history of palaeoart, covering the idea that the mythology of our ancestors might be influenced by fossils finds (a view espoused by Mayor in The First Fossil Hunters: Dinosaurs, Mammoths and Myth in Greek and Roman Times and Fossil Legends of the First Americans – Witton does not think it likely), the historic palaeoart of the 1800s and 1900s that includes luminaries such as Charles Knight and Zdenek Burian (see also Lescaze’s Paleoart: Visions of the Prehistoric Past, 1830-1980 and Rudwick’s Scenes from Deep Time: Early Pictorial Representations of the Prehistoric World), the reformation from the 1970s onwards under the influence of people such as Gregory S. Paul and Robert Bakker (author of The Dinosaur Heresies: New Theories Unlocking the Mystery of the Dinosaurs and Their Extinction), and the developments of the last decade (see Dinosaur Art: The World’s Greatest Paleoart and Dinosaur Art 2: The Cutting Edge of Paleoart for some spectacular portfolios). 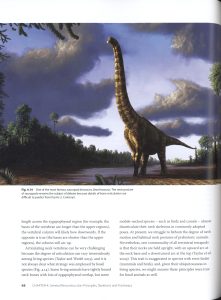 The bulk of this book, however, gives sage advice from a seasoned professional on how to prepare and research your artwork. Basically, it is really, really important you do your homework: understand the jargon, study the fossils (in person if you can), stay on top of the literature, and understand how modern animals and landscapes function and what they look like.

Witton then works from the inside out. He discusses skeletal reconstructions and the lessons that can be drawn from trace fossils and footprints once you get to decide on posture and gaits. Guts, muscles and fatty tissues rarely if ever fossilize, but we can infer a lot from a skeleton. Skin colour and texture similarly don’t fossilize well, though spectacular fossils have been found. In a very informative chapter, Witton reveals just how much you can deduce from details on bones about the overlying structures. Faces, often being a focus, get a separate chapter, discussing details on how to reconstruct eyes, nostrils, cheeks, lips, etc. A final section talks about the utility of cave art, the role of (informed)

speculation for those details you cannot infer from fossil data, and tissue depth and the questionable tendency to depict animals with minimal soft tissue (often referred to as a shrink-wrapped appearance).

Advice is also given on restoring the landscapes and plants that surround your animals, and matters of mood and composition (what are your animals doing?). Finally, some very useful guidelines regarding professional practice as an artist are given, covering topics such as contracts, collaborations with scientists, managing commissions and expectations from clients, and turning your hobby into a professional career.

“[…] in bringing all of this [information] together in this handbook, Witton has done the palaeoartist community a huge service.”

A theme that runs through the book is how to avoid tired clichés when depicting animals and how to create original and innovative artwork. Palaeoart has developed a fair number of stereotypical depictions, some of which are not very accurate of natural animal behaviour. Looking at artwork, you might think that the prehistoric past consisted exclusively of dinosaurs thundering around, fangs bared, while roaring and fighting. These tropes and memes, and the unfortunate tendency of some artists to copy poses seen in classic pieces, were explored in-depth by John Conway, C.M. Kosemen and Darren Naish in All Yesterdays: Unique and Speculative Views of Dinosaurs and Other Prehistoric Animals (a book I haven’t read, but I should really get).

As mentioned, this is not a book on how to draw a dinosaur, so Witton does not go into the actual artistic process of sketching, drawing, painting, what media to use, making digital artwork etc. That is a topic that could fill a book in itself and we can only hope that maybe one day he will write such a book. Nevertheless, The Palaeoartist’s Handbook is handsomely illustrated with artwork of many accomplished artists and a large number of very useful schematic drawings.

I am not an artist (I couldn’t draw if my life depended on it), but I found this book absolutely fascinating. Some of this information has been floating around the web, and those into palaeoart might have exchanged ideas or discussed some of the advice Witton writes about. But in bringing all of this together in this handbook, Witton has done the palaeoartist community a huge service. There simply hasn’t been a dedicated book like this before*. So, for them, this book is an ab-so-lute must. However, anyone who enjoys artwork of dinosaurs and other prehistoric lifeforms should not hesitate a moment to pick this up. It will instil a new sense of appreciation for palaeoart and might even give you the means to more critically look at existing artwork and recognise the great.

* Correct me if I’m wrong, but the most recent I could find was Witton’s reference to Gregory Paul’s chapter “The science and art of reconstructing the life appearance of dinosaurs and their relatives: a rigorous how-to guide” in the 1987 book Dinosaurs Past and Present, Volume 1 – obviously thoroughly outdated by now.