This book is an example of what happens when you go down rabbit holes. I have been reading several books on the subject of palaeontology and geology lately, and I know that the face of the earth has shifted over the hundreds of millions of years of deep history covered in these books. But where were all the continents at different times? Many will have seen the iconic maps of the supercontinent Pangaea. But I want to know more. What happened in between? And before? As Nield tells in Supercontinent: 10 Billion Years in the Life of Our Planet, Pangaea was only one of several such supercontinents in Earth’s history. But I want to know more still. Where exactly were the continents located? And how did they move? Several accessible books have provided snapshots of iconic moments, such as the formation of the Himalayas (Mike Searle’s Colliding Continents: A Geological Exploration of the Himalaya, Karakoram, & Tibet) or the disappearance of the Tethys ocean (Dorrik Stow’s Vanished Ocean: How Tethys Reshaped the World). But I want to know more! This technical reference work contains lots of fantastic palaeogeographical maps that answered all my questions.

Trond H. Torsvik and L. Robin M. Cocks, both established geologists, draw on a huge body of interdisciplinary knowledge for this book. This includes, amongst others, palaeomagnetism and polar reversals (see my recent review of The Spinning Magnet: The Force That Created the Modern World – and Could Destroy It for an introduction), past volcanic eruptions, geophysics and tomography (a technique to visualise the inside of the planet), the rock record, and fossil distribution. Putting this all together allows them to reconstruct the face of the Earth over the last 540 million years. We know that plate tectonics was happening earlier in time as well, the geological story at the heart of the lyrical A Wilder Time: Notes from a Geologist at the Edge of the Greenland Ice was that we have evidence for plate tectonics as far back as approximately 2 billion years, and this book even mentions 3 billion years. But details just become too sketchy to make reliable planetary-scale reconstructions. So, as the authors make clear, this is by no means the definitive story but a work in progress. This book shows the current state of our knowledge, which will no doubt be further refined in the future. 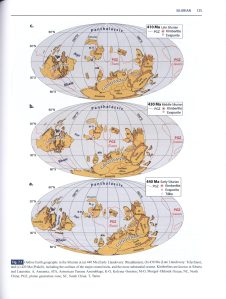 After outlining their methodology and introducing, with maps, all 268 tectonic units that they have recognised as currently making up the surface of our planet (that’s a lot more you typically see on schematic maps) we get to the bulk of the book. This consists of eleven chapters that cover each geological period from the Cambrian (541-487 million years ago) to the Neogene and Quaternary (23 million years ago to today). Each chapter starts with several overview maps of the whole planet at various stages of each geological period which are already worth their weight in gold if this floats your boat. But that’s just the beginning.

“[these] overview maps […] are already worth their weight in gold if this floats your boat.”

A large number of maps and diagrams show different projections and perspectives, systematically going through each of the major continents as they existed back then. These maps show current continent outlines and estimated coastlines and deep and shallow seas back then, but also divisions between plates where the seabed was spreading apart or where plates were being subducted or colliding to form mountains chains. Symbols indicate approximate locations of major reefs, ice caps, lakes, areas of volcanic activity including large igneous provinces (the massive volcanic eruptions implicated in mass extinctions that we met in The Ends of the World: Volcanic Apocalypses, Lethal Oceans and Our Quest to Understand Earth’s Past Mass Extinctions

), areas where coal was deposited, areas that dried up and left evaporites, faunal provinces that show the distribution of important fossil groups, as well as side-bars with approximate sea-level and climate conditions compared to today, and many other details. In the later chapters on geologically younger periods, when more details can be reliably reconstructed, many other diagrams and maps are shown, detailing the formation of mountain ranges such as the Himalayas, the appearance and disappearance of oceans, movements of the oceanic plates, etc. etc. The amount of information that is packed into these figures is breathtaking.

The text, meanwhile, links together the different events depicted and provides further context and details. Some things cannot be shown on the maps, such as the location of certain minor plates. We know they were somewhere, but we often lack enough information to place them on a map in any meaningful way. The text not only covers the geological details but also contains a section describing the dominant flora and fauna and important developments in the evolution of life during the period in question.

The book is not what you would call bedtime reading (though that did not stop me from doing so anyway) and is suffused with jargon. This comes from three sources. All geological periods are divided into shorter stages that have their own names, as shown on the official International Chronostratigraphic Chart that is printed on both endpapers. All 268 tectonic units have their own names that are introduced in detail in chapter 3. But on top of that is the terminology for geological processes and rock types. This is where my decision to study biology rather than geology comes back to bite me (I am looking at investing in some undergraduate geology textbooks because the subject continues to interest me). So if, like me, you can’t tell your ignimbrite from your gneiss, or don’t know the difference between volcanoclastic intercalations and diachronous migration, you might struggle with the text. Now, to fault the book for this would be completely missing the point. This is an advanced-level reference work, squarely aimed at an audience of geologists and palaeontologists with the relevant background knowledge – but it is good to know going in. Even so, with my limited knowledge of geological processes mostly gleaned from popular academic books, I was able to follow the grand narrative just fine. And what a fantastic story it tells! 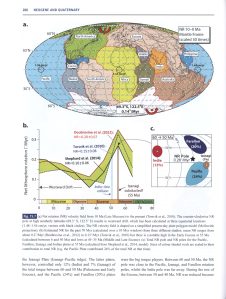 I cannot think of another book that takes such a clear, graphic approach as Earth History and Palaeogeography does. Not being familiar with the field, I am hesitant to claim this is a first, but it is obviously a very valuable compilation of the current state of our knowledge. For geologists and palaeontologists this is a mandatory reference work, but academically-minded book readers might also find this very interesting. I expect I will regularly be pulling it off the shelf to consult it while reading other books on palaeontology or geology.

For those interested, there are supplementary online resources, including several programmes that allow you to make your own reconstructions, including graphics and maps like the ones shown in the book. I have not played around with this, but it is fantastic to see the authors willing to keep this project alive post-publication.