This is a review where I am going to show my age. The year was 1981, long before the Inquisitive Biologist thought of himself as the Inquisitive Biologist (I had probably not turned one yet), and Dougal Dixon’s book After Man was published. And with it, Dixon pretty much single-handedly created the concept of speculative zoology as far as I can tell. The book was re-issued in the US in 1998 but has been unavailable for over a decade. Now, the good folk at Breakdown Press have released a facsimile version of the 1981 first edition to make this gem available to a new generation. And you get a new author’s introduction to boot.

“After Man: A Zoology of the Future“, written by Dougal Dixon, published as a facsimile reprint of the 1981 edition by Breakdown Press in May 2018 (hardback, 128 pages)

So, what is speculative zoology? It is the biological equivalent of the fiction genre of alternate history – the books and movies that ask, for example, “What if Germany had won World War II?” and take it from there. It may seem a bit whimsical, but some biologists have not been afraid to entertain themselves wondering what life might look like in the future. Dixon, a geologist who over the decades has contributed to many children’s book and children’s encyclopaedias, has been particularly influential on this genre with his book After Man.

The concept of the book is simple. What if humans went extinct and we were to travel 50 million years into the future? What would life look like then? Dixon has meticulously constructed a future version of our world, where the continents have kept on drifting (the Mediterranean Sea has closed up, Australia has collided with Asia, and South America has once again become disconnected from North America) and life has kept on evolving. A lot of the dominant fauna of our time, already under threat when this book was written in 1981, has gone extinct and Dixon imagines a world where rats and rabbits, amongst others, have exploded in diversity and taken over large swathes of the world.

“With the disappearance of the whales, some penguin species evolved into filter-feeding giants such as the vortex. And just wait until you see the bizarre bat fauna of the islands of Batavia”

Fifty million years is obviously a long time, so we do not merely have rabbits and rats. Taking the reader through the seven major biomes of future Earth, Dixon introduces us to the rabbits that evolved to take over the gap left when the ungulates largely disappeared, evolving into large grazing animals such as the rabbuck, while rats evolved into wolf-like animals such as the falanx that have become the dominant predator. There is the unlikely insectivorous pfrit, descended from a primitive shrew, that can walk on water. On the tundra, giants such as the carnivorous bardelot that descended from cats have taken over the niche of the polar bear, and prey on the woolly gigantelope, a distant relative of the antelope that resembles today’s musk oxen. With the disappearance of the whales, some penguin species evolved into filter-feeding giants such as the vortex. And just wait until you see the bizarre bat fauna of the islands of Batavia, a string of volcanic islands that formed in the Pacific, comparable to the Galápagos. 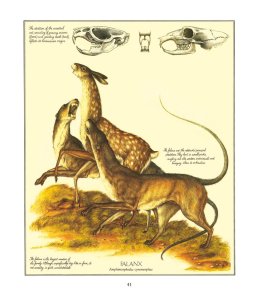 All of this would be near incomprehensible if it wasn’t for the numerous illustrations. Based on Dixon’s sketches, six artists drew a large number of beautiful, artful illustrations, and each of the 31 double spreads contains a plate, with text on the facing page describing the most important members of a certain functional group in one of the seven biomes (herbivorous mammals, birds and mammals of the treetops, desert fauna etc.). Numerous smaller drawings on either side of the text highlight some of the creatures, but also some of their unique behaviours and morphological adaptations, as well as the intermediate stages in their evolution. As much as this book is intended to entertain, it also teaches the reader about important concepts in evolution such as convergent evolution, ring species, and adaptive radiation, to name a few.

A facsimile reproduction of a 37-year old book raises two questions: How has the book aged? And, given this likely will have been reproduced from an original paper copy, what is the quality of the reproduction?

The first question might seem a bit superfluous, given that this is a work of fiction. Even so, Dixon was clearly dead serious with this book, and the first 33 pages are dedicated to a crash course on the basic concepts of evolution, genetics, natural selection, the origins of life, and various other relevant topics. For this reissue, Dixon has added some additional information to some of these sections, recognisable (but only just) because it is printed in a slightly different font. He made far fewer additions than I expected, but I imagine the only other option would have been a complete rewrite of this section to today’s level of knowledge. The 2018 introduction does a decent job of recognising how our thinking has changed though. The illustrations exude a nostalgia and quality from a bygone era, but their artistic merit stands to this day.

As for the quality, unfortunately I did not have access to an original copy when I wrote this review to compare it to, but my feeling is that the greyscale illustrations in the introduction and at the end of the book have not come out so well. Some seem too dark, and a few labels on the tree of life in the appendix cannot be read. The colour illustrations, which are obviously what we all came for, are reproduced superbly though, and it seems a high level of detail has been conserved with the many handwritten figure legends still readable. Breakdown Press has bound the book in a sturdy casewrap hardcover (i.e. a printed hardback cover without a dust jacket).

Dixon revisited the idea of speculative zoology several times after this book, for example in his 1988 book The New Dinosaurs: An Alternative Evolution (what if the dinosaurs hadn’t gone extinct?) and his 1990 book Man After Man: An Anthropology of the Future. And he influenced a generation of others, such as Darren Naish, who co-authored All Yesterdays: Unique and Speculative Views of Dinosaurs and Other Prehistoric Animals. Naish also wrote up a great interview with Dixon over at his blog Tetrapod Zoology.

Breakdown Press is to be congratulated on reissuing this legendary book, and I thoroughly recommend you snap up a copy as long as it is available. Dixon’s later books are out of print by now and fetch high prices on the second-hand market, and so it might be again with After Man if you wait too long. I would be delighted if the publisher decided to reissue some of those books as well in the wake of this one, and will be first in line if The New Dinosaurs would become available again.